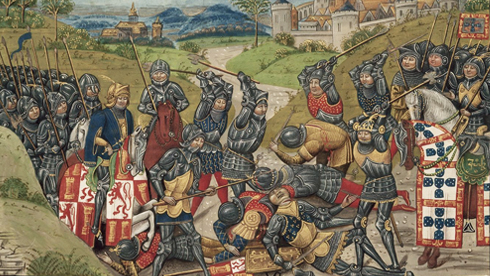 Separatism is dragging Europe back to the Middle Ages

Catalans, Scots, Flemish… Western Europe is succumbing in its turn to the sirens of separatism. For Bulgarian essayist Ivaylo Dichev, the new nationalists are entrenching themselves as feudal lords behind the walls of their economic prosperity, under the guise of protecting their identities.

To understand the European separatist movements of the past 20 years, I started with the speculative hypothesis that Sofia, the Bulgarian capital, one day raises a cry for substantial autonomy; its ultimate goal is separation from the rest of the country. How would this play out?

First, a cohort of media-savvy historians is mobilised to prove, for example, the Celtic roots of the city that fell under the blows of invaders from the north, who then massacred thousands of innocent and peaceful Christians. History is vast, and it isn’t lacking in such stories. Sofia’s independence from the rest of the country, which is less well developed, automatically leads to a boost in the prosperity of its citizens. From 37 per cent of the European average, their incomes (skillfully excluding the city’s Roma neighbourhoods) reach 70 and even 100 per cent. All that’s left for us to do is to proclaim our capital “The Luxembourg of the Balkans.” Simple!

It would be much the same if the city of Munich also began to free itself from the German “yoke” one day – ditto for the City of London. In this case, the incomes of their inhabitants would reach astronomical figures: from 300 per cent of the EU average for Muncheners and up to 600 per cent for City of Londoners!

What can prevent the rich from shaking themselves free of the burden of their poorest citizens? We must recall that after the fall of the Ottoman Empire, the Balkans were engulfed in a crisis that lasted many decades. And throughout the 19th Century, for example, the Greek economy was on life-support from big international banks, exactly like it is today. From the ruins of the Austro-Hungarian Empire was born a small, agrarian, provincial country given to folklore: Austria. In the time of their greatest splendour, these empires controlled large areas of land governed centrally – lands that were sources of raw materials and labour that industry, in turn, sold its products to. Such a trade-off requires a dose of solidarity: the rich spend a part of their profits to educate their future employees, to build roads, and to defend the country’s borders.

All this is even more appropriate today. If Sofia declares its independence, after all, the city state will have no such worries. The economy is now global, and security is provided by NATO. Rather than buying tomatoes at Plovdiv, in the south of Bulgaria, the city can buy them in Izmir, in Turkey; rather than hiring tram drivers from Vidin, in northern Bulgaria, it will be able to bring in Indians from Delhi.

Building an identity, even a fantasy identity, is certainly important. Above all, though, it is usually a tool in the struggle for power and economic resources.

Unlike Sofia, Catalonia actually does have a history that goes back a thousand years, a culture and even a language of its own. The most serious argument of the separatists, though, is the fact that this region is substantially richer than the rest of Spain, and the separatists win the sympathy of voters thanks to their refusal to pay out for the rest of the country.

In comparison, the Basque separatists, who do not hesitate to use force and terror, appear more grimly determined in their struggle against Madrid. Their independence, nonetheless, seems to me to be further off than it is for their fellow Catalans, for the simple reason that the Basques are poorer than the Catalans.

It’s much the same story in Scotland, which expects to hold an independence referendum within two years. Here again we have an ancient history, cultural differences and the damage wrought by British imperialism – in short, all the necessary identity kit to support this separatist bid. But would this desire for independence be the same if enough oil had not been found in the North Sea to make Scotland a second Norway – a country that, moreover, stubbornly refuses to join the EU? In comparison, Irish nationalism is older, and even bloody. A majority in Northern Ireland, however, has consistently come out against independence.

The Flemish in Belgium are also demanding independence because of the impoverishment of their fellow Walloons in the 1970s. Perhaps the only thing – besides the king, beer and football – that makes this pleasant little country still exist is the city of Brussels, which the two regions cannot agree to divide up. Otherwise, the process of disintegration is well advanced, and most Belgians that I know are resigned to the idea of their country disappearing one day. Corsican nationalism, which is much noisier, has on the other hand far less chance of succeeding, as the population of the "Island of beauty", where villas of “French intruders” are torched every summer, are unlikely to refuse the generous subsidies and benefits lavished on the island by Paris.

How is it that Western Europe is succumbing in its turn to the forces of separatism and disintegration that were at work in Eastern Europe in the 1990s? Need we search for the reason in the irresponsible policy of regionalism advocated by the EU? This policy was intended to weaken the nation states and strengthen the hand of Brussels. That idea failed. While the states have indeed been weakened, Brussels has been undermined even more.

In my opinion, the main cause of the disintegration of national territories is the neoliberal logic holding that immediate economic benefit is the sole and universal criterion. Consequently, a country, region or even a city begins to think of itself as a business and to act selfishly in the global marketplace. The visible aspect of this process is the hardening of the identity discourse, which becomes more aggressive, even fascistic. The British who are becoming increasingly anti-European, Germans who do not want to pay for the mischief of the Greeks … The new nationalism is defensive, and its symbols express the desire of a small group of rich to hide behind the walls of their castle, leaving those outside to their fate. Welcome to the Middle Ages!

A lot of ink will certainly flow again on all these subjects. We ought not to forget, however, the lessons of history. While Europe is reverting to feudalism, the great empires have the wind in their sails. This was true for the Ottomans, and it’s still true today for China and the United States.

Categories
Cities and regionsPolitics and democracy