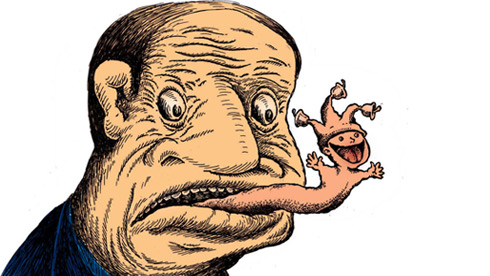 Politicians lie, and they will go on lying – at least in the Czech Republic. This does not mean there’s no sense in keeping them under watch and carefully checking up on everything they claim, and that is just what the new award-winning group Demagogue.cz is doing.

When the presidential campaign in [the Czech Republic] was in full swing in the run-up to Christmas last year, candidate Milos Zeman was asked where the finances for the billboards and other adverts that were flooding the country were coming from. Media speculation was rife that Zeman was being backed by funding from the Russian oil company Lukoil. However, the favourite to win the elections took the suspicions briskly in stride. “I may just dryly note,” he said quietly on TV channel ČT 24's Hyde Park show, “that Lukoil has released an official statement, which says that it did not give us a single crown, either directly or indirectly.”

It was not an easy moment for a debate moderator. The assertion was delivered in a convincing manner and it appealed to a higher authority – an official declaration from a major company. And even if a moderator cannot recall any such statement, he or she can, of course, never be sure that such a statement does not exist. Zeman and his assertion, in short, went unchallenged.

In Brno at that moment some students were sitting in front of their TV screens, and when, shortly after the end of the show, the entire transcript was made available, they got down to their usual work. One of the most experienced members of the group picked out from the torrent of words the de facto claims, i.e. statements that could be verified and checked against publicly available sources. The assertion that Lukoil had issued an official statement was one of these.

Milos Zeman’s claim did not stand up to scrutiny, and the Brno students tagged him with “false” – the worst rating on their scale.

The presidential election campaign earned considerable kudos for the Demagog.cz. The well-established media began to pay attention to the group, and some even put in orders for turn-key verification of statements made by the presidential candidates.

It was a remarkable achievement for an amateur association of college students, which in its Czech branch is only one year old. The aim of the group is to check the veracity of politicians’ statements, mostly those made in television debates. The core members of ‘Demagoga’ are mainly political scientists, while the project is being aided financially by the Open Society Fund Prague and the European Union’s Youth in Action programme, with additional assistance from Newton Media which is helping with debate transcripts (...).

Ondrej Lunter and Matej Hruška, from Bratislava, brought the Demagoga project with them when they came to study at Brno University. Back in 2010, no longer able to bear the level of domestic television debates in Slovakia, they thought up the Slovak version of the project, demagog.sk.

“It was sort of a student idea that came out of watching the Sunday debates, which are at a much lower level in Slovakia than in the Czech Republic. We saw that there was no one to oppose politicians who were using them as a platform to present themselves,” recalls Hruška, who later decided they should copy what was happening in the United States, where initiatives to fact-check statements made by sparring politicians have been on the go for close to a decade.

In the United States, fact-checking is done on a much more ambitious scale. Major initiatives first came to the fore in the year 2005, when the Internet really took off, and of course, Google became a household word. In America today, there are several active organisations comparable to the Czech and Slovak versions of Demagogue, some of which are staffed by dozens of journalists. FactCheck.org, for example, led by CNN veteran Brooks Jackson, has an annual budget of roughly $1m.

In Brno and Bratislava, the idea of such conditions is cause for some amusement. Today's Demagogue platforms are kept going through students' enthusiasm. And that seems to suit them, at least for now. “Our faculty is a special environment. Lots of people are doing something to tackle something or other. Not to worry, we really sink our teeth into it too,” says Jan Tvrdoň. And in practice, the student volunteers in central Europe manage to achieve results that are not significantly different from those obtained in America.

The Brno students describe the Czech political environment as “a professionalised scene, where top politicians have learned how to endlessly repeat cherry picked facts that are basically true and suit their intentions.” In this context, Milos Zeman's election campaign performance, which was marked by false information as well as confusing and unconvincing statements, caused a stir. Demagogue explains that having been out of politics for ten years, Zeman brought back with him habits from a time when nothing could be googled. At the same time, however, the students have had to come to terms with the fact that the candidate, despite his proven lies, did succeed in winning the campaign.

[Editor's note]: A few days after the interview, Demagogue.cz was awarded one of this year's journalism prizes for its work on Czech politics.