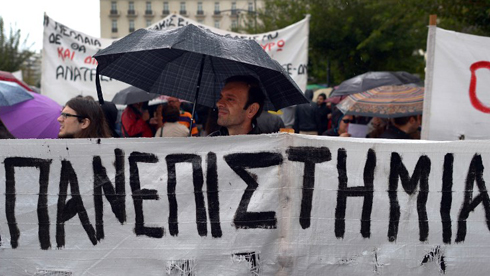 The strike by university employees, who have been protesting staff cuts for 12 weeks, is threatening students’ study courses. While some students are being delayed and are demanding that the universities reopen, fellow students abroad are busy putting their exams behind them and already thinking ahead to their careers.

For the students in Greece, the greatest tragedy is undoubtedly that their chances of obtaining a diploma are dwindling because the university doors remain shut. While they are locked out of the lecture halls and others out of laboratories, those who are studying abroad are not losing a single hour of any course and are obtaining the knowledge they need to begin to enhance their future professional life. While they are no more talented than their counterparts in Greek universities, the students abroad are actively preparing to take on the professional challenges of the future. In the first year, they stick religiously to a very fast-paced programme.

Mihalis Dinalexi and Stefanos Marguaritis are both studying to become engineers. Both are in their final year of study: the first at Imperial College in London, the second at the University of Athens. Mihalis already knows when his thesis will be presented. Stephanos, though, has missed the September session because of strikes and will start his academic year at least three months late. It is almost certain that Mihalis will enter the labour market while Stephanos will still be struggling to get his degree.

Mihalis has about three hours of studies per day. Whether or not he gets his diploma depends exclusively on him, since the university has set out the schedule for all of the courses until June. “Right now, I’m doing my planning for the coming months. The university has already announced the date of the meeting when we will present our theses. I know what to expect between now and next summer,” he explains, “and everything is going like clockwork.”

When he learned about the situation at universities in Greece, he realised how fortunate he was to have been able to study abroad. "[[In England such situations are unthinkable. You cannot imagine a university closing down because of a strike by administrative staff]]. There may be problems, but they are worked out quickly with the directors of the university and, most importantly, without any impact on students. The administrative staff and teachers consider it a top priority to keep up the reputation of the university. In four years of study I have never missed any courses. Contrary to what one hears, students in England have the right to express their opinion, to take their grievances to the Rector, but these never impair the running of the university in any way. Students elect representatives, who are invited to roundtables with the administration to discuss issues and express their opinions. Last year, we managed in that way to get a postponement of a few days to hand in some assignments", Mihalis recounts.

Imperial College is the best in the world, especially for engineers, Mihalis confirms. “At the end of our studies we stop in at the Careers Office, which helps us to get a real job in a very short time."

If this were a normal year and everything were working normally, Stefanos would be planning to graduate in engineering in the spring of 2014 from the University of Athens. However, while the September examinations have been delayed, all his projects have to be postponed until next summer. “It’s simple. In September, I had to pass two subjects that would have allowed me to start my thesis in early October, at the beginning of the semester." Then I would have defended it and got my diploma in the spring... But everything is going to be put off by a few months,” Stefanos says.

Preparing his thesis is the biggest of his worries; he should have access to the library, do the research and meet his teachers. "But the only thing I can do at the moment is arrange a first meeting with them to talk about the subject. That’s all. [[Until the university is functioning normally, I try to save time and get on with my work by trawling electronic libraries]]," he explains.

The time he has lost, even a few months, has upset his schedule and, beyond that, his plans: he will have to decide on taking a higher diploma or joining the army. "What is certain is that I will be late getting off letters to universities that interest me for a master's degree."

For him, the Polytechnic University is an excellent establishment – ranking 25th in the world list of universities – and he does not want under any circumstances to see its reputation deteriorate internationally. "What it does here is recognised around the world. It would be a pity to lower its standing. We must quickly find a common ground to resume classes,” he says, disconsolately.

A heavy cost for families

The academic year has yet to begin in the two main universities in Athens where administrative staff are on strike. Ta Nea explains that the dispute is deadlocked over the civil service redundancy plan imposed by the troika of international creditors and the progressive layoff of administrators in both institutions, which have been deemed to be overstaffed. The rector of the University of Athens has refused to accept any redundancies and opted to keep the doors of the institution closed until an agreement can be reached with the Ministry of Education.

Ta Nea points out that this attitude puts a great pressure on students’ families, for whom the average cost “of losing a semestre will amount to between €4,000 and €5,000.”
The daily adds that —

… as well as the economic burden, there are the costs that have not been measured: of mental suffering, and the expected overcrowding in auditoriums and workshop spaces, which will have to accommodate twice as many students when classes resume.