Report Minorities
Mälarhöjden, near Stockholm, October 1951. A Roma family evicted from their camp 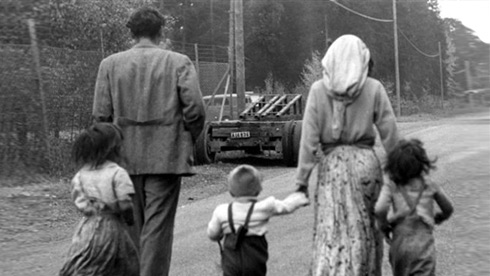 The recent revelations about the police registry of Roma lifts the veil on the persecutions the Roma have been subjected to down through history – and the discrimination they are still facing today. The revelations call into question the state of integration into Swedish society and the image the Swedes have of their own country.

Mälarhöjden, near Stockholm, October 1951. A Roma family evicted from their camp

In January 2011 [Sweden’s] Minister of Integration, Erik Ullenhag, decided to publish a white paper “on the aggression and abuse suffered by Roma in Sweden in the 20th Century”.

Ullenhag got straight to the point in his talk: “Throughout history the Roma have been victims of unacceptable abuse, such as forced sterilisation and being deprived of the right to educate their children. If we want to move forward, it is important that we draw a line under that, and that the state recognise the wrongs that have been committed.”

Honestly, what does the broader Swedish public know about these injustices? Throughout Europe, as well, there has been an alarming spread of prejudice – and resentment – against the Roma. In Hungary, citizen militias have murdered Roma while the police have remained indifferent. In other countries, the Roma are victims of virulent discrimination in employment and housing.

This is the backdrop to any analysis of the Dagens Nyheter’s revelations of the Roma registry in Sweden. Once more, a vulnerable group is reminded of its unwanted special treatment.

It is difficult to imagine a plausible explanation for registering two-year old children – unless Swedish police want to see original sin written into the legislation. In this case, when was the crime committed? When their parents failed to come up with the right family name? Erik Ullenhag seems to have no reason to postpone the publication of the white paper.

In recent years, a few - but particularly incisive books - have been published on these darkest chapters in Swedish history. In addition to the cruelty of the examples they cite, both authors depict a society that prefers to avoid complicating things for itself. Because the truth is that a country can advance in both the right and the wrong direction at the same time. Or, in the words of writer Lawen Mohtadi, in an interview with Sydsvenskan: “The Swedish model was really on the ascent, with a focus on equality. And, at the same time, this was happening.”

In 1943, Sweden conducted a “census of the Gypsies”. Lawen Mohtadi depicts it this way: “In the middle of the inferno of the Second War World, while Roma were being sent by the thousands to the Nazi extermination camps throughout Europe, the Roma in Sweden were getting visits by police officers in uniform who asked them to declare their ethnicity as well as that of their parents, and to give them a range of personal and intimate details.”

Those who want to learn more about the treatment of the Roma in Sweden can also read the public report “The Blue and Yellow Glass House” published in 2005. It mentions, among other things, that the death penalty was introduced in 1637 for “the Bohemians or [male] Gypsies who have not left the country”.

Sweden in 2013 obviously cannot be compared to Sweden of the 17th Century. We have no equivalent of the “biology of the races” that was in vogue in the country at the beginning of the last century. But we cannot pretend that these chapters have never taken place, or we will never analyse and combat the anti-Roma racism that prevails today. The police and the authorities must understand this. This is the condition for our confidence in the rule of law.