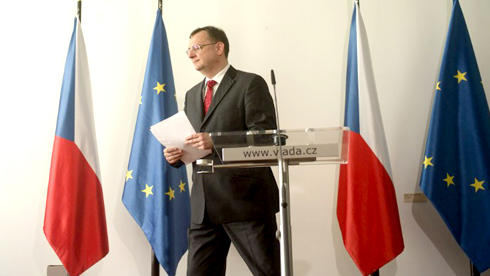 Prime Minister Petr Nečas resigned on June 17 after the arrest of his chief of staff Jana Nagyová and several people close to the government. All are accused of abuse of power and corruption. Practices "Mr Clean Hands", the nickname for Nečas, has not eradicated.

| The former prime minister after a press conference in Prague on June 13, 2013

The Nagyová affair has understandably thrown up a wave of emotions. All the same, if one can bring any measure of cool reason to bear on them, questions continue to arise as each new piece of information (and perhaps misinformation) becomes available. Indeed, since the story broke, many observers have been pointing to a series of strange events.

For one thing, how is it possible that this big scoop, as it’s been called, was known a week before it even broke? Lobbyists Janoušek and Rittig quietly went abroad – despite Roman Janoušek being up on a charge of attempted murder [last year he ran over a woman while drunk] – no alleged eavesdropping on the wives of government officials there. The main lines of inquiry – that is, into the “godfathers” – is not being pursued at the moment, neither politically nor by the media: the entire hype has been triggered by two alleged by-products – the affair of Tluchoř and company and Jana Nagyová.

The seizure of bricks of gold and millions of crowns functions, then, as an emotional trigger, consciously hurled into the fray. And if the “godfathers” or other detainees come up in any unspecified documents found in the near future, we can expect to hear more from them soon. All precisely following the script of the famous Russian theatre director Stanislavsky, who said that if there is a gun on stage in the first act of a play, it must be fired by the third.

The prevailing interpretation of events goes as follows: the police and the state prosecutor’s office have greater independence from politicians than ever before, paradoxically due to the Petr Nečas government’s policy. They have apparently begun to act on it, setting out to clean the Augean stables of Czech politics. If that is indeed the case, another paradox becomes clear: police officers and prosecutors have taken their cues from the politicians when it comes to handling the media, stirring up emotions and targetting crucial power nodes.

Nečas is clearly the main target. If he were merely a minister and something similar happened to him (for example, if the head of his office were to “break loose from the chain”), he would simply resign; and even with that “breaking of the chain” it wouldn’t be so hot for him as it could be when dribs and drabs of information are fed (or leaked) to the media. In the interest of preserving the government, party colleagues and coalition partners would force Nečas to resign; some other party functionary would relieve him, and in time he would pick up some compensation in the form of a chair on the board of some state-run company or the post of ambassador to Bratislava. But what it probably comes down to above all is that the departure of Petr Nečas means the downfall of the government. The prime minister cannot simply be replaced with a “Well, let’s move on.”

Petr Nečas became the head of the Civic Democratic Party and the government with a reputation as “Mr Clean”, and it was expected that he would even play the role of “cleaner”. He clearly didn’t get much of that done.

The fact that Tluchoř and company accepted good money (if not directly in the form of a briefcase with banknotes) for not taking down the government was clear from the beginning. We don’t need ÚOOZ – the unit of the Czech police that combats organised crime – to figure that out. What is new is the fact that the negotiations, which used to be considered as particularly nasty but still just business, have now been requalified as corruption, a criminal offence.

But, surely, such negotiations can be considered corrupt primarily when someone is forced or “motivated”, since money to carry out an unlawful act, directly and indirectly paid, is an abuse of power. Shaping parliamentarians’ mandates is not illegal, and where the appointment of persons to the administrative boards of state-owned enterprises falls within the mandate of the government (the competent minister) – i.e., no calls to tender need be sent out to fill the post – then the shunting of deputies Tluchoř, Fuksa and Šnajdr from the parliament to the administrative boards may be seen as something extremely repulsive, obscene and so on, but not directly as a crime. If that should now change, on the basis of the interpretation of the public prosecutor and the court, the consequences could be devastating.

The fact that the highest echelon of military intelligence put itself at the service of the head of the prime minister’s cabinet to snoop on the prime minister’s wife is undoubtedly scandalous. Even in the case too, of course, that the efforts of Jana Nagyová, as allegedly claimed by her lawyer, were meant to shield Radka Nečasová from Jehovah’s Witnesses. For all that, what is the real cause of the affair? Truly impartial and independent investigators somehow or other caught wind of something going on, threw up their hands and said to themselves: “Wow, that’s a real stinker – do we have to go public with it?” But cases like this, although not reaching directly into the prime minister’s office, could amount to about 10 a week.

Petr Nečas, after taking up office, was accused of inaction, even weakness. After some time he began to get slowly into gear, and even held his own in situations where everyone predicted his downfall. At the same time, all the sparrows were chirping that he was keeping steady thanks to the invisible string-pulling of his right hand, Nagyová, who had negotiated an alliance with “godfathers” – all, to say the least, at the limit of the law. Therefore, if in the course of the last two years someone wanted to “take down” the prime minister, he must have known that all he had to do was shine a light on his right hand, and bring her into the spotlight. And that is what is happening now.

It is all such a strange coincidence, though, that the courts are being very cautious, and not at all jubilant over any triumph in the fight against corruption.

A web of corruption from Prague city hall to the castle

The origin of the greatest scandal since the Czech Republic was created in 1993, is the hundreds of hours of taped police surveillance of the lobbyists Roman Janoušek and Ivo Rittig. Dubbed “the Godfathers” by the Czech press, they are suspected of rigging government contracts, explains Czech news web site aktualne.cz. Some of these taped conversations led to Jana Nagyová, the influential chief of staff of Prime Minister Petr Nečas. It has come to light that Nagyová used military intelligence to spy on several people, including Nečas’ wife because, according to the press, she is having an affair with the PM. Nagyová, who is in pre-trial custody since June 15, is also suspected of corrupting dissidents within her own party, the ODS (Civic Democratic Party) by offering them positions in public enterprises in an effort to dissuade them from bringing down the Nečas government in 2012.

The Left opposition is calling for early elections as soon as possible. Legislative elections are scheduled for spring 2014 and the opposition Social Democrats are the front-runners. To avoid early elections, the ODS and its Right-wing coalition partners tried to find a replacement to Nečas on June 17.