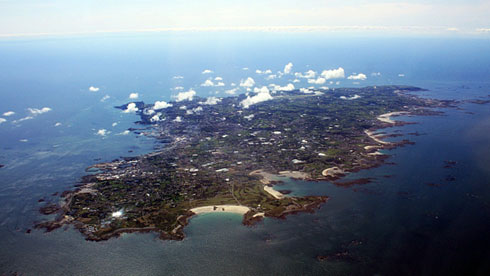 ‘Taking from the poor to give to the rich’

A few kilometres off the coast of the European Union, the Isle of Man, Jersey and Guernsey welcome billionaires who want to cheat the tax man. But campaigns against tax evasion have eroded these tax havens’ revenues and even they have been forced to resort to budget cuts.

The flow of refugees never ceases on the Isle of Man. They do not arrive on makeshift crafts, however, as they do at Tarifa on the coast of Andalusia, but in private jets. They are not greeted by the Guardia Civil [police], but by chauffeurs opening the door of the required Bentley, Porsche or Ferrari. (The island has the highest concentration of luxury vehicles on the planet.) They are fleeing not from hunger or misery but from the United Kingdom’s 50 per cent income tax rate on high revenues as well as the government’s obsession with taxing them.

The Isle of Man has not been affected by the crisis. It has benefited from continued growth for the past quarter century – 2.5 per cent last year. Nonetheless, it has not been spared from budget cuts. Jersey and Guernsey are also feeling the impact of the international campaigns to turn the screw on tax havens, to force them to be more transparent and to reduce their privileges. The result is loss of revenue and a budget deficit paid for, not by the multi-millionaires, but by the workers. It is the Robin Hood effect backwards – taking from the poor to give to the rich.

“If we destroy our financial system, we will become a kind of Liverpool, but with a worse climate,” claims Manx Prime Minister, Alan Bell. During the last G8 meeting, he promised to participate in the fight against tax fraud and to “take into account the concerns of London and the European Union,” but did not commit to anything concrete. This makes sense. The financial sector accounts for a quarter of the island’s economy, there is an advantageous corporate tax rate and the highest tax level is 20 per cent, capped at €125,000 annually no matter the amount of revenue declared. There is no estate tax, not even on capital gains – all a boon to the millionaires.

A tax haven located in the middle of the Irish Sea, the Isle of Man is a very peculiar place. It is known for its motorcycle races, for two active moon exploration programmes, a flourishing private space sector and a company, Excalibur Almaz, which plans to organise the first trip to the moon since the Apollo 17 flight, more than 40 years ago. Pensioners are hired as extras on the numerous film and television productions that are filmed there (more than 50 to date) to benefit from the low tax rate.

But the wealth theoretically found on the island is purely digital and those that own it spend it in London, New York or Saint Tropez. [[The seaside promenade of Douglas, the capital, is a far cry from the Croisette]] [in Cannes on the Riviera]. Here there are no mansions because the wealthy are simply headquartered here. The houses and the shops are identical to all the others in northern England. The wages of the 80,000 residents (nearly all white) are close to those of the UK, but the cost of living is clearly higher. Rents are higher and food must be shipped in by boat or flown in by airplane.

In addition, budget cuts totalling €35m will be applied to all ministries other than health and education. The cuts will affect seasonal workers (five years of residence are required to benefit from health care). This is because London has decided to reduce the island’s share of VAT receipts on betting revenues, which represent €500m per year (60 per cent of the budget). As for raising taxes on the wealthy, that is clearly out of the question. “This is the worst crisis I’ve ever known, and I’m no spring chicken,” says pensioner Norma Cassell in a tea room in downtown Douglas.

The Channel islands of Jersey and Guernsey, located just 15km from the French coast in the English Channel, have the same status as the Isle of Man – they are not part of the EU or of the UK. They are neither overseas territories, nor colonies but are British crown dependencies, with their own flags and national anthems. They swear alliegience to the Queen, pay London a fee for services linked to defence and to diplomacy but they make their own laws, especially regarding taxes.

It is estimated that Jersey alone, holds €600bn of revenues that are evading taxes, hidden in the accounts of some 50 international banks. [[More than half of the 98,000 residents are bankers, accountants, lawyers or financial advisors]]. It is like a giant country club in which, to join, you have to live on the island for 11 years, be worth at least €8m and own a property costing at least €2m.

At the Saint Helier airport, there are ads for tax advisors and property managers but none for fast-food outlets. Yet, as with Douglas, the capital of Jersey, has no particular charm. It offers run-of-the-mill homes (some poorly maintained) and the same chain stores as everywhere else. The per capital revenue is €22,000, higher than in the UK, but those that are not millionaires or do not work in finance are furious at the 3 per cent hike in VAT, aimed at compensating the drop in revenue due to the greater pressure being put on tax havens. “If we were in France, there’d already have been a revolution. It’s unbelievable that we, the poor, have to subsidise the millionaires,” complains pharmacist Edith Newman, at The Admiral, a pub in James Street. It is the same story as on the Isle of Man.

“There is a lot of talk about the crisis but if tax havens exist it’s because the elites and the governments have decided that they will,” says a fund manager operating out of an office on Royal Square. “We are steeped in hypocrisy. Jersey alone provides €200bn in liquidities to the British banking system, a release valve that was very useful during the financial crisis. If States need money, they will get it from pensions and wages, without touching the very wealthy,” he explains. But on these treasure islands, that is an open secret.