The vulnerability of museums and high-end art owners to costly thefts has been a whispered concern in France for years, but two events here are forcing the issue into the open. 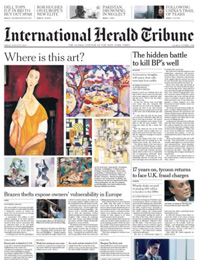 A spectacular €100 million, or $127 million, burglary at the Paris modern art museum in May and the trial next month of three men in connection with an audacious heist at the Left Bank apartment of a Picasso granddaughter have laid bare how susceptible the keepers of great art are to the efforts of seemingly meticulous thieves.

In waltzing away with five paintings at three galleries at the Museum of Modern Art — including works by Picasso, Matisse and Modigliani — burglars appear to have identified the single window with a flawed security alarm, the rhythm of the security guards’ nightly rounds and the multitude of lesser artworks to avoid.

Similarly, in the crime at the center of the imminent trial — the late-night theft of two valuable Picasso paintings — the thieves used a carefully molded fake key to enter the apartment, worked quietly enough not to awaken the granddaughter while cutting the paintings from their frames and rifling through her purse, and left without leaving fingerprints or a trace of DNA.

The identity of the thieves in both cases remains a mystery — the trial involves three people accused only of trying to fence the Picassos, not of having stolen them — leaving the art world here saturated in speculation about the crimes and baffling questions beyond them. Read full article in International Herald Tribune…

“Egon and Wally reunited once again”, proclaims Le Monde. On Monday, August 23, the portrait de Wally Neuzil, model and lover of Egon Schiele, rejoined the Austrian painter’s Self-portrait at the Léopold museum of Vienna. Thus ends the saga of “one of the most famous demands for restitution of a work of art confiscated by the Nazis”. Stolen in 1938 by Salzburg dealer Friedrich Welz, art collector Rudolf Léopold was subsequently able to acquire the precious painting that the New York Museum of Modern Art (MoMA) arranged to have seized following a 1998 exhibition. Still, it was only after the death of the octogenarian and a payment of 15 million euros to the heirs of the original owner, that the piece could once again be returned to Europe.