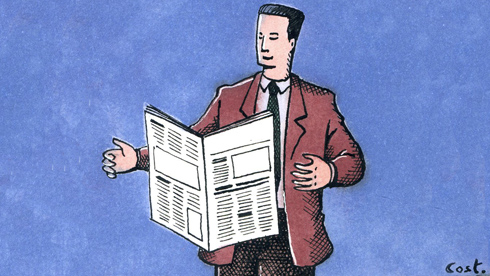 The article will self destruct

The Financial Times Deutschland is hitting the newstands for the last time on December 7, and the Frankfurter Rundschau is insolvent. Behind this, lies a development that is bigger than the Internet, says media guru Sascha Lobo: news is becoming ever more streamlined. The concept of whole, complete article is out of date.

“Don’t shoot the messenger” is the English proverb, meaning “Don’t punish the bearer of bad news.” Sure – but it’s hard not to.

The dying of the print media in Germany seems to have begun, and apparently the victims range from the left (Frankfurter Rundschau) to the centre (Financial Times Deutschland) – from the higher echelons including business magazine Impulse, to the lower ones such as lifestyle magazine *Prince*, which will be sold strictly online as of January 2013.

A lively discussion about the causes, and conclusions that must be drawn, has begun. Often it’s about business models, newspapers and of course the Internet. Less commonly, it’s about how the concept of news itself has changed, whether printed or pixilated.

Behind this lies a development bigger than the Internet. The history of technology is a history of streamlining: apparently, humanity has always striven to make the world fluid – and the Greek aphorism “Panta Rhei” (“Everything flows”) is to be grasped not as a declaration but as a clarion call.

Ironically, printed newspapers, which emerged in the early 17th Century, promoted streamlining in a crucial way; they were much faster at getting information across than the books that had been used until then. Digitisation and networking followed.

Written news therefore, whether on paper or via the Internet, comes in article form, which is the customary way it is consumed. But perhaps that will change, just because the audience also expects that same streamlining here. News gives you the feeling that you are up to date with the latest events. Perhaps it is not the printed newspaper, but the static coverage and the concept of a completed news article that lies at the heart of the crisis.

In the print media, those who avoid the streamlining culture best, are those outlets which remove themselves from mere reportage.

The printed magazine Landlust (covering life in the German countryside), which can be counted as a success, as it covers topics that keep it at a safe distance from the world of traditional news.

The Economist, hailed as a role model in both its printed and pixelated versions, sums up world news events in the print edition in one to three sentences; the remainder of the articles are analyses, background reports and opinion pieces. That is, texts that will help to understand the news process, rather that putting a reporter on them to flash-freeze them at a point in time.

A news article, regardless of the medium, is no longer enough to describe the world. The growing streamlining can be seen on the Internet as well, and for that reason the static article of news coverage we have grown used to has become obsolete. The news process does not tolerate any downtime.

Against this backdrop, putting a complete news article up on the Internet, is like filming a piece of theatre and comparing it to a movie at the cinema: it is word-for-word translation, which doesn’t take sufficient advantage of the opportunities offered by the medium.

In news-intensive moments, the Live Ticker strives to keep up. This is a sign that the concept of a whole news article, not even one extended by that extra Live Ticker, is not the right form for building up a picture of the news stream – and just when the news is actually most important, when the feeling of being informed has only a half-life of a few minutes or even seconds, the very structure of the ticker system – that items are sorted in reversed chronological order – makes it clear that it follows other rules and satisfies other needs.

Demise of the snapshot

The end of the news snapshot is imminent, and the media that have specialised in snapshots, both online and offline, will suffer from its demise.

To view the apparent newspaper crisis as a news crisis – as the end of the static, purely fact-based coverage in the form of articles – does not lead, admittedly, to any entirely new analysis of the problem. It does lead, however, to much broader consequences.

For the print papers it means staying away from the areas where the streamlining pressure is strongest: that is, away from the snapshot created by coverage, and towards a supporting role. It is difficult to tell whether the papers can carry this off day-in, day-out. It depends less on the physical paper and more on the fact that large parts of the machinery of daily newspapers specialise in capturing snapshots.

Even more gripping, however, is the question of what the ruthless streamling pressure will do to news on the Internet.

Perhaps a recognisable split is looming. News will be presented in a stream, and the classic article form will be no more. The update stream will be supplemented by explanations, background information, analyses, and stories in constantly updated article form, which the news feed can refer back to continuously.

Tomorrow’s news will come from live reports and a constantly updated archive of backgrounds and contexts. There is very little wriggle room in between, and what room there exists, is linked only marginally to the physical paper.

Do not shoot the reporter; this might be his last job.

After FR, farewell to FTD

“The economic and financial newspaper Financial Times Deutschland is being published for the last time on Friday, December 7,” writes the Finanzen.net site. “After nearly 13 years,” it reports, “the paper is pulling out of the German press market.” Closing is part of the restructuring of the “economy” branch of the Bertelsmann media group. The closure,LeMonde explains –

will affect more than 300 employees in total. Nicknamed FTD, the German edition of the Financial Times was launched in 2000 to compete with Handelsblatt, Germany’s business press behemoth. Since its launch, though, it never climbed out of the red.

On the eve of its demise, FTDpublishedreactions from its readers on its website, and noted that the crisis of the German media, which has also seen the news agency DAPD and the Frankfurter Rundschau go under, “is making the financial world reflect.” The communications head at investment bank Goldman Sachs told the newspaper: " “For us, it’s a disaster. When newspapers die, we are left with fewer experienced partners.”