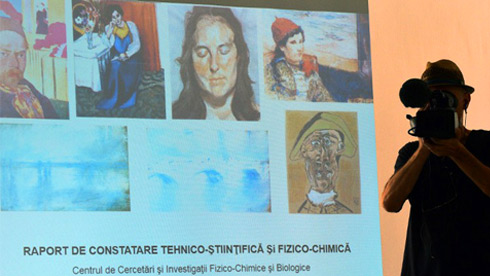 The barbarians are among us

Already stigmatised for the theft of copper cables, will Romanians also earn themselves a reputation for destroying art and inept police work? The trial of the suspected Kunsthal Museum robbers, due to start on August 13, reveals the gap between the most backward parts of Romania and a still distrustful western Europe.

In recent years, I have often heard of trains that derail in western Europe and that it is now more dangerous to take the train than to take an airplane. One of the reasons for the trains derailing is that some European citizens, carrying Romanian passports, dig up the copper cables in order to sell them.

An accident in these conditions is inevitable and the perpetrators are perfectly aware that people could be injured because they have stolen very expensive cables to sell them for next to nothing.

Then, when you read that these same European citizens tried to sell paintings by Matisse, Gauguin and other masters worth €18m, for €400,000, and that when the plan failed, they burned the artworks to avoid prosecution, you could say that the anti-social consequences of this is, by comparison, a trifle.

But such is not the case. The story of the [October 2012] theft of paintings from the Kunsthal Museum – removed simply with a pair of pliers, carried in a pillow case, put on sale on Facebook and finally burned in a stove after the suspects were already in custody – shows to what point the civilized world is vulnerable to an invasion of barbarians.

Henri Matisse, Paul Gauguin and Pablo Picasso didn’t stand a chance against Moise George, nicknamed George the Thief, the intermediary charged with selling the stolen objects, or the gangs of pimps that work for and with him.

Societies evolve and are defended more by the values of the majority of their citizens than by the forces of criminal repression, which ease with time.

But what happens when societies at different stages of development meet? Microscopes are stolen and used to hammer nails, cables are stolen threatening the lives of thousands of people. And the resentment grows, because such societies cannot regress and return to the means of control of the past.

Thus, their populations begin to fear and to detest the new arrivals, to vote for parties that want to close their borders – because without Schengen how could [prime suspect] Radu Dogaru and his gang have crossed five borders without being arrested? – in short, to become racists.

A country such as ours includes all sorts of people, as do the Netherlands or Burkina Faso. I often run into Romanians visiting museums in the West or who are making an honest living in the Netherlands or elsewhere and they are appreciated by all. The difference between Burkina Faso, Romania and the Netherlands is found in the level of social control, which has reached a high state of evolution only in the latter case.

Certainly, Romania is not the worst country in the world, and we grossly under-estimate the positive heritage of communism, the fact that there are no weapons and that the violence in public areas is reasonably controlled, compared to places such as Brazil or other comparably developed countries.

But it is not a good country either. We simply have not achieved, in our historic evolution, a sufficient degree of social control, even if it seems we have more admirers of Matisse per hundred thousand residents than Burkina Faso!

We are not capable of having western standards, and it is depressing to see how western Europeans who live in our country, in the absence of controls, end up lowering themselves to our level. When our civilized people emigrate, that is not a problem because they integrate immediately into the evolved society where they arrive.

Of course, we are looking at a complex balance between, on the one hand amoral creatures, including all those involved in the paintings affair – Radu Dogaru’s mother, his aunt and their friend, who had the idea of burning the paintings and who carried out the deed, the gangsters themselves. Not to mention the expert they consulted who advised returning the paintings but did not alert the police.

The Office for the Investigation of Organised Crime and Terrorism is swaggering over a case in which paintings of almost incalculable worth were burned four days after the suspects were arrested – paintings that were buried twice (and unearthed) in different places and then ended up burned in the stove of the prime suspect’s mother.

But what were they doing while all this was going on? Where is the “Great State Victory” in having caught some nincompoops who posted the details of their heist openly on Facebook, while allowing the destruction of what should have been recovered at any price?

I wonder which western European lobbying firm will now try to erase the consequences of the actions of an everyday woman leaning over the stove burning a Monet, a Picasso and the incriminating slippers, motivated by a mother’s love and other equally evolved feelings…

The “heist of the century” is but an “unfortunate accident which continues the dialectic of art history,” says Dan Popescu, owner of the H’art Gallery in Bucharest. In a blog published by Romanian daily Adevărul, he cites four reasons why the art world “will not be affected in the least by these disappearances”.

the Rotterdam museum will obtain a large compensation payout from the insurance company, which will allow it to acquire other works of art; most of the works represented exist as reproductions, so they will continue to live in that form; these paintings were not representative of their authors; art works cannot be preserved indefinitely, they deteriorate and, sometimes, their disappearance is beneficial and breathes new life… The Futurists, after all, even wanted to burn museums.