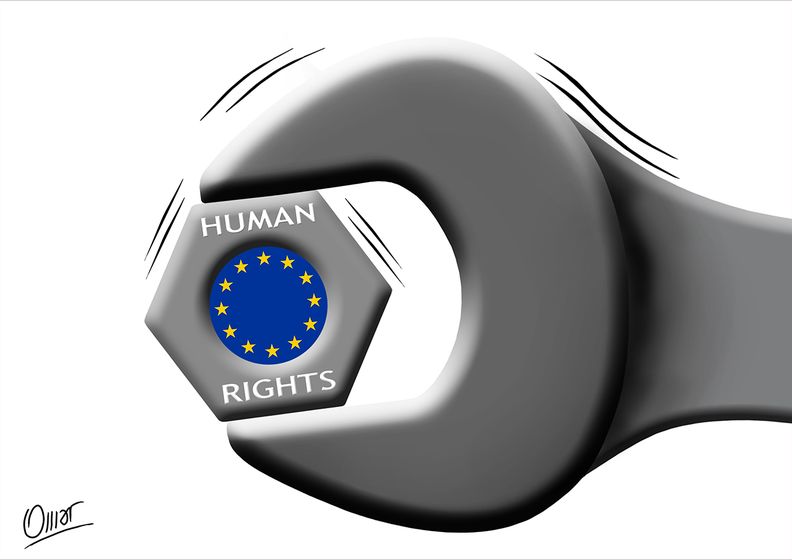 The Charter is 20, but do citizens only know it exists?

Solemnly proclaimed 20 years ago, the European Union Charter of Fundamental Rights remains rather unknown and not fully implemented. Today the European Commission publishes a strategy to change this situation. Time to know more, thanks to expert Gabriel N. Toggenburg.

We tend to think that in America everything is newer than in Europe. Recently the US bill of rights turned 230 years old. In contrast, the EU Charter of fundamental rights was proclaimed only 20 years ago, on 7 December 2000.

Surveys have shown that Americans are more likely to name two members of the fictional Simpsons family than provide the content of two of their bill’s rights. But don’t smile yet. Europeans might be in worse shape. A recent EU survey confirms that well over half of European population have no clue what the Charter is.

With this in mind, the EU ministers came together to emphasise the need “to foster the citizens’ ownership of the Charter”. But is it worthwhile to learn more about this document? What is this “Charter of Fundamental Rights”?

The Cambridge dictionary defines a “Charter” as a formal statement of the rights of a country’s people or of an organisation. So far, so good. A “Charter” is not, however, a typical form in which EU law can be enacted. In fact the Charter is a hybrid creature. It is not an integral part of the EU treaties, but it has “the same legal value” as these treaties. In this sense the Charter is ‘non-treaty treaty law’.

This hybrid character does not have practical implications. Unless people would like to have the Charter’s content changed, as a project by two artists from Germany might suggest: they invited citizens to discuss whether the Charter’s text needs an update. How such a change can take place, legally speaking, is unclear.

Placing the Charter outside of the EU treaties was not beneficial either to the intention of the Charter, namely to make the “overriding importance and relevance” of EU fundamental rights “more visible to the Union's citizens”.

However, the name “Charter” clearly conveys one message: the document is about a full-fledged list of rights.

Secondly, the Charter’s name is clear about the fundamental nature of the document. Given that the Charter has the same legal value as the treaties, all EU legislation has to be in conformity with it, or risk being declared null and void by the EU Court of Justice in Luxembourg as happened for example to the Data Retention Directive which laid down an obligation to collect all our telecommunication data. As a piece of EU law, the Charter is supreme over national law as well. Some of the Charter’s provisions are even binding for private parties, for instance, when concluding a contract – so far the Court has accepted such an effect for the right not to be discriminated against (Article 21), the right to a fair trial (Article 47) and the  right to paid annual leave (Article 31(2)).

That the Charter uses the term fundamental rather than human rights signals that this is about the EU’s internal dimension and not about situations inside third countries or international law where the EU still prefers the term “human rights”. The term establishes a parallel to the Member States constitutional systems that often use the term fundamental in relation to rights. In fact, the Chairperson of the European Convention drafting the Charter – Roman Herzog, a former president of Germany – said in his opening speech: "it is time to give a clear signal to the outside world that the European Union must not be any less bounden to its citizens than are the Member States under their own constitutional laws."

Back then, some criticised the EU for mimicking the Member States. But let’s be clear: this fundamental document was not crafted by anonymous bureaucrats. Quite the contrary. Forty-six of the 62 members of the European Convention drafting the Charter were Parliamentarians. Representatives from all EU Member State governments co-drafted and agreed upon the Charter’s text. Civil society was invited to submit proposals. In short: the genesis of the Charter was an open and participatory process, which further adds legitimacy to this document of constitutional relevance. The Charter did not fall from heaven onto the streets of Brussels but was built on the constitutional traditions common to all the Member States.

The over 50 articles of the Charter represent a codification of the current international human rights law obligations. To this consensus, the Charter adds three additional elements.

This major breakthrough did not come for free. To accommodate the resistance of especially the United Kingdom, it was necessary to add a provision in Article 52(5) specifying that the Charter contains next to (strong) rights which can be invoked before courts also other, legally speaking weaker provisions, namely (mere) “principles” which cannot be directly invoked before courts. This episode in the drafting of the Charter should not, however, lead to the conclusion that none of the socio-economic provisions in the Charter were ’proper‘ rights.

The 3,860 words of the Charter of Fundamental Rights are drafted in an accessible language. The majority of the Charter provisions consist of one single sentence. But already the distinction between rights and principles shows that the Charter is ’easy to read but difficult to understand‘. What adds even more complexity: Unlike the Council of Europe‘s European Convention on Human Rights (ECHR), the Charter is not always binding on the States. Legally speaking, the Charter only applies when a State acts within the scope of EU law.

This means: Besides the Charter, a second EU legal act is required that would be applicable in a specific situation. This creates a considerable potential for frustration that makes guidance necessary. Every year, the European Commission has to send many hundreds of disappointing letters to citizens who thought the Charter could provide help, only to learn that their case fell outside the (in)famous ’scope of EU law’. So, is the Charter an ‘Illusionary giant’ that looks great from far away but shrinks once one takes a closer look?

Such a view would ignore what this still quite new instrument already achieved! The Charter has sparked a new fundamental rights culture in EU institutions. It has  turned from a legal ornament into a legal order. At a national level as well, the courts have shown that the Charter can have a considerable impact. Moreover, the Charter is a concrete expression of the values shared by the EU and the 28 Member States. For this reason alone, it is worthwhile to study the Charter. A Simpson series about the Charter might be an option to render the Charter better known. Or, alternatively a blog series dedicated to the Charter. Well, here you are: ‘All EU-r rights‘, stay tuned!

This comment is based on the introduction to the blog Series “All EUr rights” which will explain the Charter article-by-article throughout 2021. It is published on Eureka aiming at making the EU Charter of Fundamental Rights better known. Those interested in joining the launch of the European Commission strategy for the effective implementation of the Charter can register here.