Greeks are cheats who aren’t worth bailing out. Germans should pay Greece’s way out of the morass because the Nazis plundered the country. A war of words is raging between two countries that had hitherto succeeded in surmounting the hurdles of history, complains Süddeutsche Zeitung.

The press has fanned the flames in the spat between Berlin and Athens. Front pages from Eleftheros Typos, I Nikis, and Focus. Montage: Presseurop

When nerves are frayed, good sense has a hard time getting through. The Athens newspaper Kathimerini recently ran a cartoon showing the country’s finance minister at work when his secretary announces the arrival of EU inspectors. “Just a sec!” the minister yells and tears his shirt off. Then you see him demonstratively flagellating his bare torso with a rod. Three men are standing next to him in Gestapo uniforms barking “Sehr gut!”.

And yet the conservative Kathimerini has been the voice of reason these days warning against “anti-German hysteria”. Filippos Petsalnikos, president of the Greek parliament, was also considered the voice of reason – until he gave the Germans a piece of his mind and summarily summoned the German ambassador for a dressing-down.

This is the hour of “little minds”, groans one newspaper. Schoolboy wisecracks and ignorance in the German camp, where Focus magazine has the Venus de Milo giving the finger on its cover and, for the rest, reduces Greece to a land of fraud and degeneracy - "Ineradicable: Greek Guile”. Swastikas and a hollow show of protests followed on the other side. Kathimerini columnist Kostas Kalfopoulos calls it a “war of clichés” and seeks refuge in Hölderlin: “Aber wo Gefahr ist, wächst das Rettende” – “But where there is danger, deliverance grows apace.” However, wonders Kalfopoulos, “What if only stupidity grows?” Incidentally, the columnist speaks fluent German, as do plenty of Greeks. German is foreign language number two here: a whole generation went to college in Germany back in the 1970s. 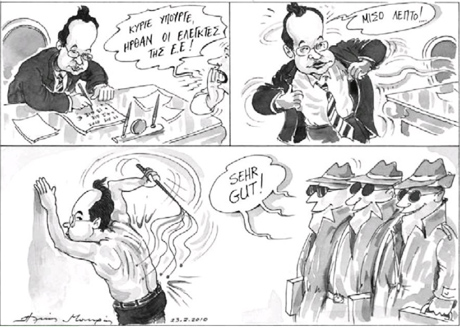 That is the perhaps the truly amazing thing: that scraps of German like “rrraus” (“Get out!”) and “kaputt" (in the sense of “dead”) have remained in the Greek collective memory since the war, but hardly any abiding culture of resentment. The Greeks forgave the Germans astoundingly fast. “And that, even though no other non-Slavic nation suffered so much at the hands of the Germans,” notes German historian Hagen Fleischer, who lives in Greece. The world’s first Goethe-Institut opened in 1952 – in Athens; the first German president, Theodor Heuss, made his first trip abroad in 1956 – to Greece. At the time people were rallying round the anti-Communist flag, which swiftly eclipsed Nazi atrocities.

But the Greeks have always wanted one thing in particular, points out Fleischer: “They wanted to see that the Germans remember.” Still, even some Greeks are irked to see the issue of German reparations being raised right now as a tit for tat: “Some people are using that as a lollipop to divert attention from the ailment,” opines columnist Kalfopoulos, “at a time when Greece has got to roll up its sleeves and work together with the Europeans.” However, that most Greeks feel betrayed in this regard is a fact that Germans cannot deny if they wish to understand why the whole opposition camp, from right-wing LAOS to the orthodox Communists, are suddenly clamouring for reparations again.

After 1945 there was a tacit consensus among the Allies to build up Germany as a bulwark against Communism, rather than crippling the country with debts. For all intents and purposes, the 1953 London Debt Agreement released the Germans from their obligation to settle their war debts. The country would not have to pay up until it was reunited under a peace treaty. So it was not by chance that Bonn fought, successfully, to ensure that the “Two Plus Four Treaty” on German reunification would not be called a “peace treaty”: the point was to dodge reparations again. Says historian Hagen Fleischer: “The Nazi themselves officially put their debts to Greece at around €5 billion in current-day terms.” Under the so-called “Umbrella Agreement” of 1960, West Germany made only a single payment of 115 million Deutschmarks, but that was mainly intended for Jewish victims of Nazi crimes in Greece.

A German diplomat sums up Germany’s official position thus: “As far as we’re concerned, the reparation claims have been taken care of by the passage of time.” That may look pretty clever from the German perspective, and it may even be a Realpolitik imperative. But should we really be surprised if some Greeks, conversely, consider German guile ineradicable? “Even if we feel we’ve been had,” argues columnist Kalfopoulos, “this is utterly irrelevant to the situation we have to contend with.” That’s true. Still, as historian Fleischer puts it, “It’s the tone that counts.” And it is pretty shrill these days. Over here and over there.

The Greek and German governments are redoubling their efforts to douse the flames fanned by the press in both countries. The blast was triggered by a cover of Focus magazine that showed the Venus de Milo giving the finger. The Greeks, cut to the quick, lost no time in responding in kind: the very next day, the left-wing daily I Nikis riposted with a Nazi flag fluttering over Brandenburg Gate, followed by a battery of cartoons. Greek deputy prime minister then brought up the pillage committed by the Germans in World War II, for which reparations have never been paid. So last week a Greek consumer group called for a boycott of German products in Greece. German banks, for their part, said they would refuse to buy Greek bonds. To defuse this incendiary atmosphere, German chancellor Angela Merkel has invited Greek prime minister Georges Papandreou to Berlin on 5 March.