Report Agriculture and the environment 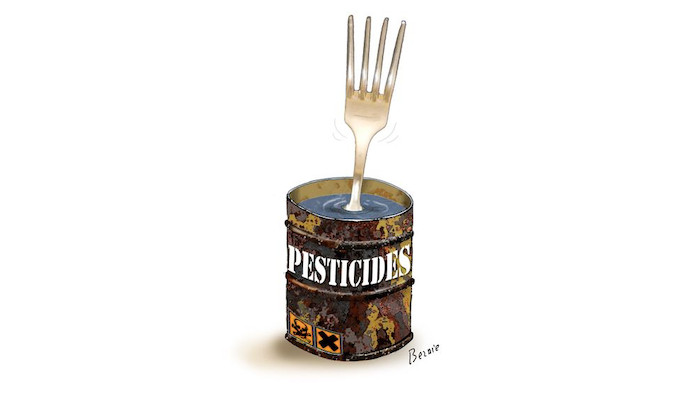 Report Agriculture and the environment

The EU bans the successor of DDT

After lengthy discussions the European Union is preparing to ban the use of chlorpyrifos, the most widespread pesticide in the world, and suspected of causing neurological damage.

Today the EU begins its crackdown on chlorpyrifos, the most widespread pesticide in agricultural fields around the world, and allegedly harmful to human health. These harmful effects have been confirmed by the evaluation conducted by the European Food Safety Authority. Many other scientific studies have demonstrated the molecule’s harmfulness, especially to infants’ mental development. On Friday 6 December the standing committee with expertise in plants, animals, food and feed, composed of experts from various member states, is set to approve the European Commission’s proposal aimed at banning the sale of the pesticide throughout the single market. The Committee is tasked with issuing opinions on the implementation measures proposed by the Commission, within the framework of the existing legislation on food safety. It can also eventually reject any proposals by majority vote.

Chlorpyrifos is currently only banned in eight EU member states: Denmark, Finland, Germany, Ireland, Latvia, Lithuania, Slovenia, Sweden and Great Britain. In the other EU countries pesticides derived from chlorpyrifos can be legally acquired until 31 January, when the ban comes into force. Dow Chemical, the US chemicals giant, invented and patented the chlorpyrifos molecule in the sixties as a replacement for the infamous DDT, which was banned long ago. Over the last fifty years, Dow Chemical has reaped profits from selling licences to competitors who have developed a multitude of variants which are used to protect more than one hundred different crops in around eighty different countries.

Pressure from Dow Chemical, close to Donald Trump, have so far dissuaded the Environmental Protection Agency from imitating the EU’s proposed ban. This is despite the fact that it was in the US, in 2006, that the neurological damage inflicted by chlorpyrifos on babies in the womb was discovered. The analyses performed by the multinational’s scientific laboratories were intended to exculpate the controversial chemical compound, whose toxicity is contested by certain sources. Nevertheless, the EU is set on strengthening the dose. In February 2020, the same technical committee will vote on another European Commission proposal, which requires a ban on all food containing traces of chlorpyrifos. The measure forms part of the 2009 Regulation on the placing of plant protection products on the market.

The tests performed by the European Food Safety Authority found such traces in 5.5 percent of 76,200 analysed samples. A study by the NGO Pesticides Action Network calculated the risk level in each EU country based on the latest EFSA data (2016). To remedy the situation, the European Commission wants to reduce the presence of chlorpyrifos in food to a maximum of 0.009 mg/kg, a threshold under which the contaminant is no longer detectable. All products with percentages over this threshold may no longer be sold, including those on which the EU depends (47 million tonnes of fruit and vegetables imported in 2018, compared to 37 million exported).

The ban announced by Brussels has sparked protests from major commodity exporters outside the EU: not least the USA, whose products, along with those of China, have the highest levels of chlorpyrifos on the European market. The countries  who feel threatened reserve the right to adopt countermeasures within the World Trade Organisation. However, the EU will allow them three months from the time of the ban to clean up their business. 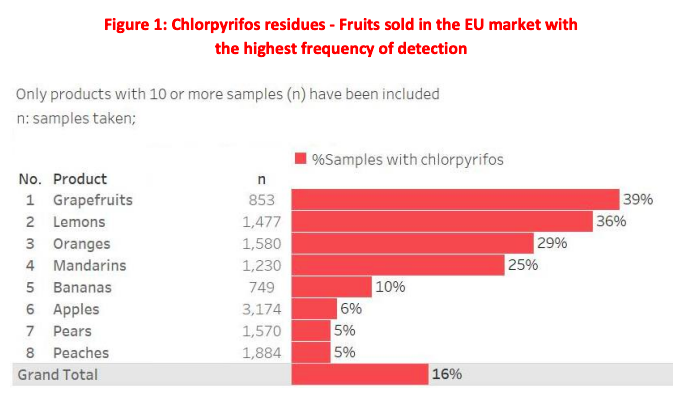 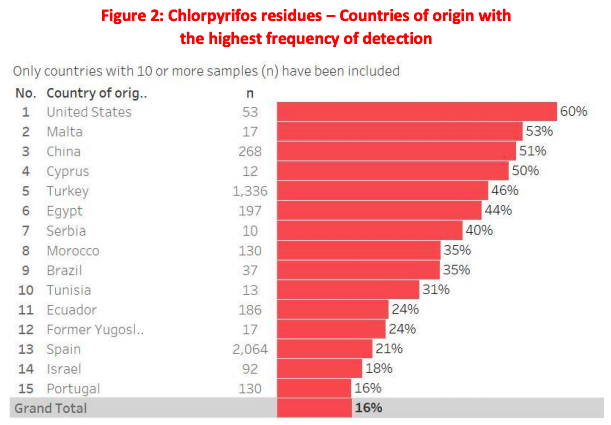