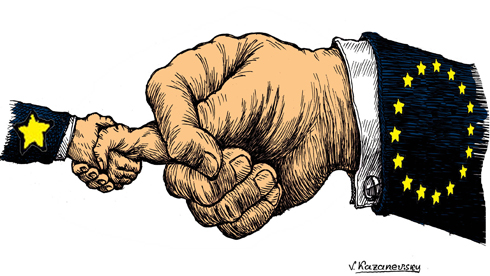 The EU must not lay down its arms

Following the Ukraine’s refusal to sign an association agreement with the EU, Europe cannot afford to lose the confidence of other Eastern Partnership countries. At the upcoming Vilnius summit, it must send a clear political message to Moldova and Georgia, writes Die Welt.

When was the last time protesters waved the starry banner of the European Union with such fervor? In the 1950s, on the German-French border? In 1989, and then in the "Velvet" revolutions from Bucharest to Tallinn? And today, at demonstrations in the Ukraine, and a few weeks ago in the Republic of Moldova. There, "Europe" is still synonymous with hope. To put it more precisely: for prosperity first, security second, and freedom third. Three conditions of life that are dear to everyone.

The rallies in Moldova spoke of confidence. The protests in the Ukrainian cities were marked by sorrow and anger. On Friday, at a summit in Lithuania, which current holds the Presidency of the Council, the EU will take stock of a project whose name has so far promised much more than it has delivered: the Eastern Partnership. It should have been a way to bind the states in eastern Europe more closely to the EU. But Russia discouraged the idea immediately. Among the republics of the Caucasus, resource-rich, authoritarian Azerbaijan distanced itself from the project; and now so too has Armenia, strongly dependent on Russia. As has Belarus, essentially run by a dictator.

With the other three countries – the Ukraine, Georgia, Moldova – the EU has negotiated association agreements. These are far-ranging documents, which provide for legal harmonisation (of the eastern neighbours with the west), the consolidation of democracy and the market economy – and finally more free trade, and fewer customs duties. Can anyone be against that? Far from it. Rather, a piece of old wisdom is verified: the most pious man cannot live in peace if it does not please his wicked neighbour.

Prosperity, security and freedom for the neighbours – that would be pretty much the last thing that would please the hegemon of Russia, grown stronger under Vladimir Putin. In the search for an explanation, simpler natures may encounter a Russian proverb: If two farmers live side by side, and one has a cow and the other has none, what does the poorer neighbour wish for? That the cow of the rich farmer will snuff it. Russia wants to prevent different models of government and society from emerging in its own back yard, perhaps even – horribile dictu – a confident civil society. In two scheduled meetings called at short notice, Putin apparently brandished carrots and sticks at the Ukrainian President Viktor Yanukovych. Now it’s the European Union that has the egg on its face. Last Thursday, the Ukraine – incidentally, the largest state in Europe proper – stepped down off the train leading to an association with the EU.

It sounds paradoxical, but the EU will soon have to prove itself – its ability to take the political initiative in its eastern neighbourhood – to Moldova and Georgia. Is there humble pie to eat there? Both states want to initial their EU agreement in Vilnius, which would be the last step before the signing. European politicians have played obstetrician at the birth of EU-friendly governments in Moldova like nowhere else. But European Union elections are coming up in six months, and six months later elections in Moldova. [[If the momentum of the EU falters, if the Moldovans get no clear signal in the form of visa-free travel, the Communists could win the election]].

Admittedly, both countries suffer from "frozen" conflicts: Georgia, because Russian troops still occupy one-third of the country; Moldova, because Russia is backing separatists who are running their own “state” on a strip of Moldovan territory. But that may not be permitted to stop the clock of history, as both countries can of course be stablised and brought into the EU. Today it isn’t about membership: it’s about trade and commerce. About what is important and realistic. That Cyprus, an EU member, is divided, we had almost forgotten as well; that partition has now become the permanent state of affairs.

The alternative? That Russia would again build up a sort of Imperium around its borders. With significant differences from the former Soviet Union, however. At that time Moscow had to grant a standard of living to the republics bordering Europe that was higher than the standard of living of the Russians themselves, to keep the borderlands quiet. Things would be different this time: the new satellites are to be a degraded zone of poverty and instability that will send millions of undocumented workers out into the world, to build new office towers from Moscow to Madrid. And their wives, left at home, will sooner or later throw the faded flags of Europe into the trash.

"Let’s be honest: it is not only the policies enacted by Moscow but also programmes such as the Eastern Partnership that have led to a geopolitical tug of war," argues Belgian academic Ria Laenen writing in Belgian daily De Standaard. Commenting on last October’s presidential election in Georgia, won by Giorgi Margvelashvili, she says that "it is certain that Georgia’s unconditionally pro-Western path, such as we knew it under Mikheil Saakachvili, will end," but this is not necessarily a bad thing:

Instead of focusing on Russia’s assertiveness at keeping or bringing back Eurasian countries into the fold, it important that we realise that it is high time to redefine the message that the EU is addressing to these countries […] Should we force them to choose between Moscow or Brussels? […] This election made it clear that the Georgian people want to normalise relations with their large neighbour, Russia. […] The first step to take is to admit that the EU also has geopolitical interests, or better yet, geo-economic interests in these countries. Primarily, because they are gas- and oil-producing – as is Azerbaijan – or because, like Georgia, they play a crucial role as transit countries on pipeline routes.