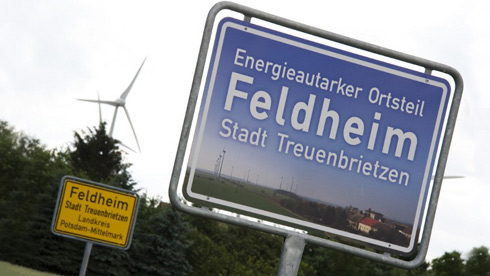 This village near Berlin is the only place in Germany that is completely autonomous in terms of energy supply. Thanks to wind turbines in their backyard and an independent grid, residents pay minimum prices for electricity. It’s an example for environmentalists everywhere.

Petra Richter doesn’t need a lot of words to tell the winning story that has helped her community experience a whiff of worldwide fame. The alternative came along at just the right time, says the chairperson of the municipality of Feldheim, a small village southwest of Berlin that has become the first – and so far the only – place in Germany to be self-sufficient in energy. That’s why every year around 3,000 visitors from all over the world come to the village in Brandenburg with a population of only 130, which despite its altitude of 150 metres above sea level, is not so easy to find.

It was all put together step by step, Petra Richter says. The first four wind turbines were put up in 1997. There are now 43 of them, and they produce 140,000 megawatt hours of electricity annually. Pondering alternative energy sources each and every day, the local agricultural cooperative began at some point to mull over the construction of a biogas plant. A meeting was held with the initiator of the windmills, Michael Rascherman, and he was asked to come up with a concept.

[[He found out that the 4.3 million kilowatt hours from the biogas plant could heat more than the buildings for the pigs and the cooperative offices: it could heat the entire village]]. At that time, many residents still heated their homes with stove heaters. Others who had put in central heating after the energy transformation discovered it had already broken down. The willingness to venture into new and unexplored territory, Petra Richter recalls, was enormous: “Nearly everyone was excited at first.”

Following a few community meetings it was decided to start up the Feldheim Energie GmbH & Co. KG. The company was intended only to generate district heating for comfortable temperatures in all Feldheimer households, and was also set up to distribute the electricity produced by the wind turbines on the villagers’ doorstep. But matters weren’t as simple as that. The owner of the local power grid, E.On-Edis, was unwilling to sell or lease its power lines, and so new ones had to be built and installed. And so there arose a situation unique to Feldheim: there are two power lines in the village today, and the old house connections have been severed.

For its new power supply, Feldheim Energie had to come up with around €400,000. The deposits of the limited partners were just sufficient for this. Only property owners from the district, as well as businesses, the waterworks, the Church, and the town of Treuenbrietzen, which Feldheim belongs to, could be members. The contribution of each came to €3,000 for electricity and heat, or half of that if the shareholders wanted only one of them.

Building the power grid, on the other hand, was a piece of cake compared to the €1.7m that the district heating network cost. The Feldheimer residents could finance that only because the EU and the state of Brandenburg came up with half the funding. For the rest, Feldheim Energy took out a 15-year energy loan, which it is paying off according to plan. Almost all the residents have signed up to the scheme and committed themselves for ten years with their deposit. Only two out of 40 households could not be won over. Still, the agricultural cooperative, the municipality, the waterworks and the Church did join those 38 individual households. The three-kilometre-long heating network runs out to 35 households; the others rely on geothermal energy. Those who have opted for the alternative networks, however, have saved a lot of money.

[[The heat has been piped in since 2009, and a year later the wind turbines began to feed in their energy]]. While the average price of a kilowatt hour in Germany is 28 cents, Feldheimer residents pay only 16.6 cents, as they buy the electricity directly from the producer. This unusually cheap fare is only possible thanks to a special provision in the Zugangsentgeltverordnung, the "Grid Access Fees Ordinance". According to the spokesman for Energiequelle Gmbh, Werner Frohwitter, only a fraction of the current generated – around half a percent – flows to Feldheim, while the rest is fed into the public grid. The cost of heat for the Feldheim residents is 10 per cent less than in the rest of the country.

Ecotourists from around the world

Feldheim has become a model village in all matters related to environmentally friendly energy. In 2009, to complement the biogas plant, a wood-chip heater was built, and it ensures that the old farmhouses stay toasty warm on cold winter days. One of three villages to win the Ministry of Agriculture’s “Bio-Energy Village” award in 2010, the municipality ploughed the €10,000 back into continuing to develop renewable energies. Today, its environmentally friendly energy has become a significant factor in the small town’s economy. Agriculture, which offers bread and work to 30 people, still dominates nonetheless. But the EQ-SYS company, which makes metal components for photovoltaic systems, has also created 21 jobs.

Eco-tourists from all over the world flock to the village every year, despite the lack of an intact Gasthof where they can sleep. The former restaurant building is currently being converted into a Research and Education Centre by the Feldheim New Energy Forum Foundation, the Förderverein Neue-Energien-Forum Feldheim. The association offers tours of the Ecovillage in German, English, Spanish and French. Japanese is yet not on offer – despite the many Japanese who, last but not least, following the disaster in Fukushima, have found their way to Feldheim.