Refugees in Ukraine
Afghani, Pakistan, Congolese, Palestinian and Somali refugees in a detention camp in Chop, Western Ukraine, in 2009. 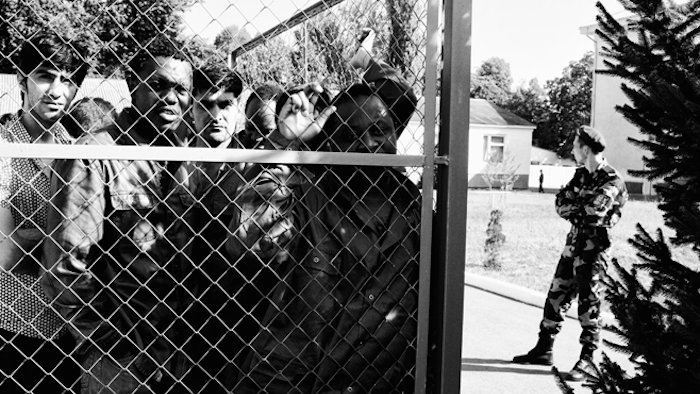 “The Guantánamo of the East”

Afghani, Pakistan, Congolese, Palestinian and Somali refugees in a detention camp in Chop, Western Ukraine, in 2009.

Although less in the news than the Mediterranean, Ukraine is also an important route to Europe for refugees fleeing islamists in East Africa. But asylum seekers report that reception conditions there are disgraceful.

Hasan Hirsi is 21. He left Somalia when he was fifteen, after terrorists from Al Shabab attacked his village and killed his father. He fled to Moscow and, from there, people traffickers led him to Kiev. It took Hirsi five years and five attempts to cross over from Ukraine to the European Union. Each time he was stopped by border police from Ukraine, Hungary, or Slovakia. He spent almost three years in Ukrainian prisons and detention facilities, where he claims to have been robbed, beaten and tortured by the security forces. Today, he tells Der Spiegel, he thinks of Ukraine as “hell” and still suffers from nightmares.

The attention of the press and politics is focused primarily on immigration routes across the Mediterranean. But Maximilian Popp notes in a long enquiry, published on the German magazine’s English site, that “when it comes to the eastern route, and the fate of migrants like Hasan Hirsi, interest has thus far been limited.” This even though “last year, despite the conflict in Ukraine, hundreds still tried to reach the EU from Eastern Europe.”

One of the main crossroads on the eastern route is the Ukrainian town of Uzhgorod, near the Slovakian border. Refugees often spend months there, waiting for their families to send them the necessary money to continue their journey west. Then, “for several hundred euros, Ukrainian traffickers take migrants from Uzhgorod across the border to Hungary or Slovakia,” Popp writes.

Even if EU member states are supposed to examine each request for asylum, “countries along its outer borders, like Hungary and Greece, often ignore the regulation and send refugees back to non-EU countries.” It is because of this that Hirsi, who wanted to request asylum, was sent back to Ukraine several times.

Between 2000 and 2008, the EU committed 35 million euros to Ukraine to reinforce its border control. In the past few years, Brussels has poured in an additional 30 million euros to construct and modernise its migrant detention and reception centres. An agreement signed in 2010 between the EU and Ukraine established that refugees who enter the Union via Ukraine can be sent back across the border.

“The outsourcing of the EU's asylum policy is more advanced along Europe's eastern edge than anywhere else,” Popp writes, adding that “Brussels is apparently hoping that the system will reduce the number of asylum seekers in Europe -- without attracting too much attention.” But NGO Human Rights Watch had already criticised the EU in 2010 “for investing millions to divert flows of refugees from Europe toward Ukraine, while neglecting to take sufficient steps to ensure the humane treatment of refugees in Ukraine.”

Hasan Hirsi’s account suggests that refugees in Ukraine are treated inhumanely. One of the detention camps where he stayed, Pavishno, was known as “the Guantánamo of the East”. Migrants in the camps “were kept in a dark, unheated room, he says and the guards refused to allow them to use the toilet. Many refugees urinated into bottles or onto the floor, and they were given nothing to eat for days at a time. "We were held like animals," says Hirsi.” During questioning, officials would beat migrants and give them electric shocks. According to Hirsi, on official declared “You are in Ukraine now. Not in Germany. Not in England. There is no democracy here.”

Hirsi’s account is consistent with a number of other reports and witness statements. The UN High Commission for Refugees has deemed (HCR) the imprisonment of migrants in Ukraine to be a violation of the European Convention on Human Rights. The fear is that the treatment of migrants might worsen still with the crisis rocking Ukraine. As the representative of the HCR in Ukraine puts it, “the government in Kiev has its hands full caring for almost a million internally displaced persons. [...] It is hardly capable of providing for asylum-seekers from the Middle East and African countries, as well.”