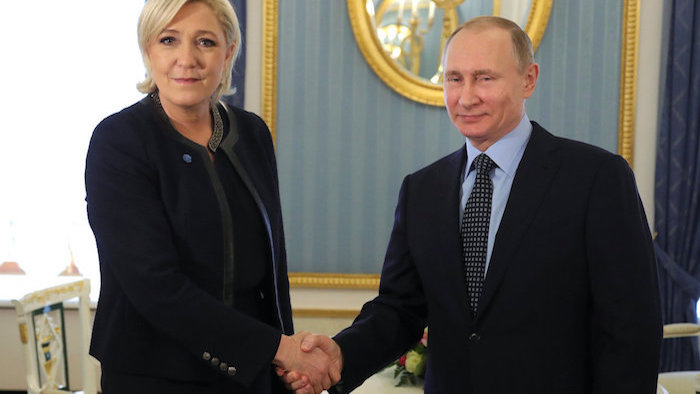 By flooding French social media with fake news and openly supporting far-right leader Marine Le Pen, the Kremlin is weighing in for the most anti-EU candidate in the 23 April runoff.

Almost one in four of the internet links shared by French users of social media in the run-up to elections were related to fake news, much of which favoured anti-EU candidates and showed traces of Russian influence, according to a new study. The survey, by a UK-based firm, Bakamo, published on 19 April, looked at 800 websites and almost 8 million links shared between 1 November and 4 April.

19.2 percent of links related to media that did not “adhere to journalistic standards” and that expressed “radical opinions … to craft a disruptive narrative” fell under what the study called the “reframe” category. A further 5 percent related to “narratives [that were] often mythical, almost theological in nature” or discussed “conspiracy theories” fell under what it called the “alternative” section.

The sources shared in these categories favoured anti-EU candidates both on the far right and the far left: Marine Le Pen, Jean-Luc Mélenchon, Francois Asselineau, and Philippe Poutou. They also favoured Francois Fillon, a centre-right candidate who is friendly toward Russia.

Bakamo’s research found that one in five sources in the reframe section were exposed to influence by Russian state media known for spreading anti-EU disinformation, such as RT or Sputnik, […]

Money from Russia with love

Revelations that Marine Le Pen tried to borrow a further €3 million from Russia pose questions on Kremlin interference in the French election. Mediapart, a French investigative website, revealed on 30 March that Le Pen, the French anti-EU and far-right candidate, agreed to borrow the funds in order to finance her campaign.

The website published an internal document of her National Front party, showing that she and party chiefs on 15 June last year decided to borrow €3 million from Strategy Bank in Russia at an interest rate of 6 percent per year to be repaid in 2018. It said the “purpose of the borrowed money” was “financing the electoral campaign”.

Mediapart also published a second National Front document, which said the funds were to be used for election “expenses” and were to be wired to a bank account opened in Le Pen’s name. Le Pen, whose surprise meeting with Russian leader Vladimir Putin in Moscow on 24 March caused a stir, declined to comment.

The party’s treasurer, Wallerand de Saint-Just told Mediapart that the €3 million loan was “just a project, which did not have any follow-up”. Mediapart did not say whether the National Front received the money and did not give information about Strategy Bank.

The revelations come after Le Pen and her father admitted last year to having previously borrowed €11 million from different Russian sources. Fears of Russian election-meddling in Europe were heightened after Moscow was accused of having swayed the outcome of the US vote via hacking and disinformation. Le Pen is neck-and-neck in polls with the centrist, pro-EU candidate Emmanuel Macron for the first round of the presidential vote on 23 April. […] Read full article on EUobserver.