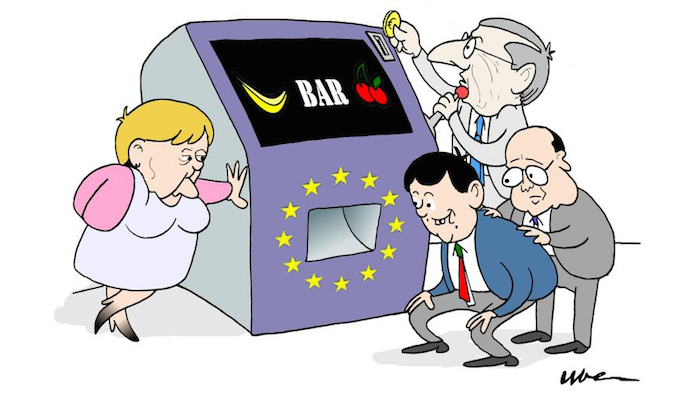 ‘The last chance to overcome the crisis’

The EU budget will provide €16bn, and another €5bn will come from the European Investment Bank. The rest will be financed by private investors. This press review has been made thanks to euro|topics.

“Brussels is taking action. This is a signal, a wake-up call,” writes Die Welt. The German conservative daily believes Juncker's investment programme is the right measure for helping the crisis-ridden EU countries. However, it adds —

The EU is setting up a fund with relatively little money that will cover a significant part of the risk for private investors in a bid to make them less wary and thus prompt new investments. However, it's unclear whether Brussels’s scheme for boosting investments will work to the full extent, as there’s a risk that simply not enough projects will find investors. Because the bottom line is that money is only invested in infrastructure, energy and digital technology when the returns on investments are attractive and the conditions are right in the respective country.

“The European Commission is playing for a lot of money, but with low stakes,” comments La Libre Belgique, according to which —

The game is a risky one, because failure would destroy trust in the Commission and hurt the European project, which will be further weakened if hopes are dashed. Member states still have to save and sometimes introduce painful reforms. They’re still paying a high price to recover from the crisis. The private sector must now shoulder its share of the responsibility.

Austrian daily Die Presse is rather sceptical and does not believe Juncker’s investment package will revive the weak EU economy, in particular because of the bad shape of some countries’ budgets —

If businesses fear that growing debt levels will force them to pay more taxes and duties, this too will prompt them to invest less. For that reason, an incentive that uses new borrowed money seems rather counter-productive.

Juncker’s investment plan is the last chance to save the EU, believes the Spanish left-liberal daily El Periódico, which wishes to “wait and see” if the private sector will be willing to invest in the fund —

It wouldn’t be the first time such a programme is announced without ever bearing fruit. And the planned duration of three years seems too short to produce results, given the sluggishness of EU bureaucracy. But Juncker was right when he said this was the last chance to overcome the crisis. If this scheme doesn’t work, it would symbolise not only the failure of Europe, but of the EU itself.