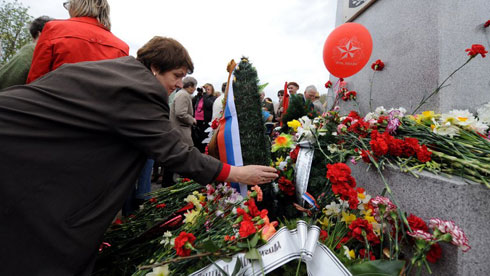 The little Russia that wanted to break away

Twenty years ago, the district of Ida-Viru voted in favour of autonomy but was halted by the Estonian state. Today, the 146,000 inhabitants of the region, most of them Russian, have given up asserting their claim. Nonetheless, they live apart from the rest of the country.

“What referendum? No, I wasn't aware of one,” admits a surprised Julia [Russian], 42 years old and a resident of Narva, on the 20th anniversary of the referendum on the autonomy of her region, Ida-Viru [the most eastern district]. At the time, however, the yes vote had prevailed [54 per cent of the vote, with a 52 per cent turnout], worrying the none-too-strong forces defending the young Estonian Republic.

The consultation had been held in 1993, on July 16 and 17 in three towns in the region: Narva, Kohtla-Järve and Sillamäe. Despite the results, the State Court ruled that the referendum in the three cities contravened the Constitution and the movement for autonomy was quickly deflated. No Transnistria of Estonia was therefore born [a reference to the Russian-speaking region that broke away from Moldova but has not been recognised by any country].

At the time, the situation was not without problems. [[Narva was a city where the blue, black and white flag of Estonia fluttered close by the statue of Lenin]]. “[The most powerful experience that I lived through: meeting three real Cossacks in the flesh] coming out of the cabinet of Vladimir Tšuikin, president of the Municipal Assembly,” remembers Rein Annik, aged 78, then director of the city’s electrical grid. The burly and mustachioed men wearing sword belts frightened him. That day, Tšuikin asked him whether it would be possible to install a compound and electricity at the checkpoint between what would become the autonomous region and the Republic of Estonia.

For those who backed autonomy for the region, the model to follow was the Russian-speaking and pro-imperial republic created in 1992 along the Dniester in Moldova. “Tšuikin being from there, he had the idea of importing watermelons – a rare commodity at the time – from there. I understood that it was more than just watermelons,” says Rein Annik.

Mihhail Stalnuhhin, former Mayor of Narva and today a member of parliament, believed that one of the forces pushing for the referendum was, on one side, a certain elite that had enjoyed power under communism and was trying to cling onto it by creating this autonomous region. On the other, there was deep disappointment at the coming to power of the [pro-nationalist] government of Mart Laar, which implemented a policy of strict citizenship that left most Russians living in Estonia stateless.

“From the start there was a sense of a certain injustice,” explains Stalnuhhin, who is of Russian descent. The first laws adopted in Estonia, he believed, absolutely failed to take into account the Russian-speaking population. “In Narva in 1991 there were only two teachers of Estonian who were university graduates, for 15 schools and 13,000 students. The other teachers were simple Estonians, without any particular training. How can they then accuse normal people [Russians] of not mastering the Estonian language?”

How was calm restored to Narva? “The framework of the Estonian legislation gives us the possibility to defend our rights today. Back then, we couldn’t,” explains the MP.

A state within a state

According to Rein Annik, these were the first concrete measures taken by the Estonian state that helped calm tensions in the area. A few months after the referendum on autonomy, the statue of Lenin was transferred from the central square to the courtyard of the museum. The heap of bouquets and wreathes laid down every year in April at the foot of the monument, on the birthday of the father of the revolution, has grown smaller each year.

The transfer of Lenin’s statue into the museum, however, does not mean the Estonian flag flies higher. In the first years after independence, there were about 10 representatives of Estonian origin sitting on the municipal council. Today there is just one. This situation is frustrating for Annik. In his view, the Estonian state has a much lower presence in the region now than it did in the early 1990s. “A resident of Narva who is of Russian origin knows nothing about the Estonian state or the situation of the country”, says Annik. “Television is in Russian, they communicate with their families that remained on the other side of the border in Russia. [[There is no link here to the Estonian Republic]]. “Some speak English, yes, but Estonian – only a few children speak it a little.

Katri Raik, Director of Narva College, notes that a glance at the map tracing the mobility patterns of the Estonians [throughout the interior of the country] shows the city of Narva [whose population is 96 per cent Russian] as a kind of state within a state. No one comes here and no one leaves.

In Annik’s view, the only attraction in Narva is the Russian consulate, which always has a long queue outside it. He believes that the state should take a different tack: “No prime minister has done anything to make this region more Estonian. They’ve let things slide”, Annik says angrily.