The man who screwed an entire country

After nearly twenty years in politics, and ten years in power, Silvio Berlusconi has made his mark on Italy like no-one before him. According to The Economist, in an article that is already the subject of much debate in his country, the Cavaliere, his image ever tarnished by sex and corruption scandals, "will haunt Italy for years to come".

Smile and the world smiles with you. Silvio Berlusconi during his regular guest spot on "Porta a Porta", a national TV show. 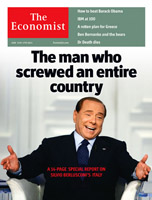 Silvio Berlusconi has a lot to smile about. In his 74 years, he has created a media empire that made him Italy’s richest man. He has dominated politics since 1994 and is now Italy’s longest-serving prime minister since Mussolini. He has survived countless forecasts of his imminent departure. Yet despite his personal successes, he has been a disaster as a national leader—in three ways.

Two of them are well known. The first is the lurid saga of his “Bunga Bunga” sex parties, one of which has led to the unedifying spectacle of a prime minister being put on trial in Milan on charges of paying for sex with a minor. The Rubygate trial has besmirched not just Mr Berlusconi, but also his country.

However shameful the sexual scandal has been, its impact on Mr Berlusconi’s performance as a politician has been limited. But it is now clear that neither the dodgy sex nor the dubious business history should be the main reason for Italians looking back on Mr Berlusconi as a disastrous, even malign, failure. Worst by far has been a third defect: his total disregard for the economic condition of his country. Perhaps because of the distraction of his legal tangles, he has failed in almost nine years as prime minister to remedy or even really to acknowledge Italy’s grave economic weaknesses. As a result, he will leave behind him a country in dire straits.

A chronic disease, not an acute one

That grim conclusion might surprise students of the euro crisis. Thanks to the tight fiscal policy of Mr Berlusconi’s finance minister, Giulio Tremonti, Italy has so far escaped the markets’ wrath. Ireland, not Italy, is the I in the PIGS (with Portugal, Greece and Spain). Italy avoided a housing bubble; its banks did not go bust. Employment held up: the unemployment rate is 8%, compared with over 20% in Spain. The budget deficit in 2011 will be 4% of GDP, against 6% in France.

Yet these reassuring numbers are deceptive. Italy’s economic illness is not the acute sort, but a chronic disease that slowly gnaws away at vitality. When Europe’s economies shrink, Italy’s shrinks more; when they grow, it grows less. Only Zimbabwe and Haiti had lower GDP growth than Italy in the decade to 2010. In fact GDP per head in Italy actually fell. Lack of growth means that, despite Mr Tremonti, the public debt is still 120% of GDP, the rich world’s third-biggest. This is all the more worrying given the rapid ageing of Italy’s population. Read full article in The Economist...