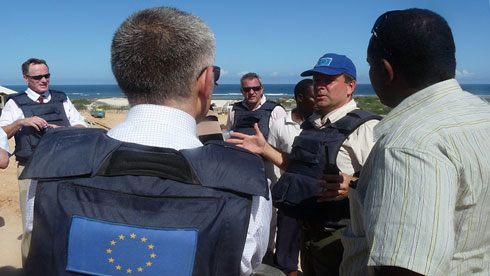 The Old Continent is still fit, thank you (1/2)

Pessimists around the world repeat that the European Union is doomed because of structural weaknesses and the economic crisis. But in many fields, the EU holds its own against world powers like the United States and China, argue Mark Leonard and Hans Kundnani.

European Union staff at the Al Jazeera camp in Mogadishu, built by the African Union mission to Somalia with the financial support of the EU.

No. These days, many speak of Europe as if it has already faded into irrelevance. With its anemic growth, ongoing euro crisis, and the complexity of its decision-making, Europe is admittedly a fat target right now. And the stunning rise of countries like Brazil and China in recent years has led many to believe that the Old World is destined for the proverbial ash heap. But the declinists would do well to remember a few stubborn facts. Not only does the European Union remain the largest single economy in the world, but it also has the world’s second-highest defense budget after the United States, with more than 66,000 troops deployed around the world and some 57,000 diplomats (India has roughly 600). The EU’s GDP per capita in purchasing-power terms is still nearly four times that of China, three times Brazil’s, and nearly nine times India’s. If this is decline, it sure beats living in a rising power.

Power, of course, depends not just on these resources but on the ability to convert them to produce outcomes. Here too Europe delivers. Indeed, no other power apart from the United States has had such an impact on the world in the last 20 years. Since the end of the Cold War, the EU has peacefully expanded to include 15 new member states and has transformed much of its neighborhood by reducing ethnic conflicts, exporting the rule of law, and developing economies from the Baltic to the Balkans. Compare that with China, whose rise is creating fear and provoking resistance across Asia.

Yes, the EU now faces an existential crisis. Even as it struggles, however, it is still contributing more than other powers to solving both regional conflicts and global problems. When the Arab revolutions erupted in 2011, the supposedly bankrupt EU pledged more money to support democracy in Egypt and Tunisia than the United States did. When Libya’s Muammar al-Qaddafi was about to carry out a massacre in Benghazi in March 2011, it was France and Britain that led from the front. This year, France acted to prevent a takeover of southern Mali by jihadists and drug smugglers. Europeans may not have done enough to stop the conflict in Syria, but they have done as much as anyone else in this tragic story.