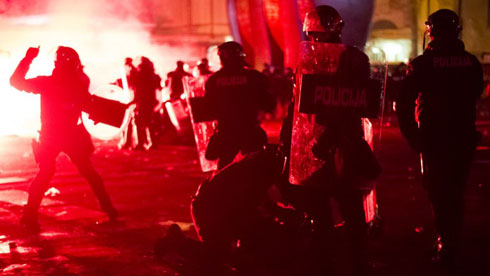 In early December, thousands of demonstrators took to the the streets of Maribor to drive out the local mayor. What was the motive for the eruption of discontent in a city where people are usually so well behaved? The economic crisis and the impunity of the country’s political elite, a Slovenian journalist explains.

| Clashes between police and anti-corruption protesters in Maribor on December 3.

Maribor has always had a reputation for being a town where nothing happens. The rate of abstention in elections is higher there than it is elsewhere, and local residents have no great commitment to political and social causes.

How then was it possible that in the space of a week 20,000 people brandishing placards against the city’s mayor would turn out to protest in Freedom Square, and later throw eggs, chairs and petrol bombs at the town hall? We still can’t believe it.

All the more so because, in a kind of generalised ecstasy, the entire country then took to the streets to demonstrate its solidarity with Maribor.

In 20 years of independence, the protest was entirely unprecedented. People even talk about “the Maribor uprising” as though it was a historical event. But what were its causes?

At the top of the list, there was the mayor of Maribor, Franc Kangler, and his decision to install fixed speed cameras at all of the city’s major junctions.

In just a few days, the cameras recorded 70,000 offences – which meant that the same number of fines were issued to locals who are already suffering from the effects of the economic crisis. At the same time, the speed cameras had been installed at locations where it was be easy to catch drivers committing offences, and not, for example close to schools. But that is not all.

The concession to operate the speed cameras had been granted to a private company, and the bulk of the funds from fines (approximately 93 per cent) was paid to this company, which had promised to renew the city’s traffic-light system.

In short, the mayor had recorded yet another success in his political “mission impossible”, to privatise the state. Before long the first signs of dissent appeared, and the burning of speed cameras became increasingly commonplace in Maribor.

The speed camera privatisation was the most recent of a series of unpopular initiatives organised by Maribor’s local authorities, which were committed to unbridled neoliberal capitalism. Starting in 1997, they privatised the sewage system, water distribution, public transport, the city’s cable cars, the municipal undertakers –as a result, the cost of dying in Maribor had risen to the point where it was twice as expensive as it was in Ljubljana!

Recently the Commission for the Prevention of Corruption revealed “abuses of power” and “systematic corruption” in Maribor. The discovery came as no surprise to local citizens. The Commission had simply confirmed what they already knew.

However, dissent spread like wildfire across the country because the problem was not confined to Kangler and his scams.

In Ljubljana, Kranj, Celje and Trbovlje, people took to the streets carrying candles to protest against corruption, nepotism and local oligarchs. They were concerned that the entire territory of Slovenia would turn into an extended Maribor.

Slovenians are envious of Croatia, which convicted its former prime minister, Ivo Sanader, of corruption and sentenced him to a long spell in prison (10 years in the initial trial).

Nothing like that has ever happened in Slovenia. If Prime Minister Janez Janša, who continues to avoid prosecution for long-standing corruption charges refuses to abandon his post, why should leave theirs? Several Slovenian mayors have been found guilty of the mismanagement of public funds, but they have never had to bother with retributive justice. A number of MPs, who have also been found guilty are also refusing to resign from political office.

The Slovenian political elite has nothing but disdain for court rulings, which it likes to present as evidence of political plotting. However, Slovenia’s citizens have had enough of all of this, and what has happened in the country is proof of this fact.