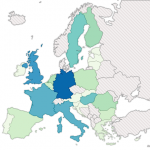 The rankings of EU countries with the most medals

Since their creation in 1896, the Summer Olympic Games have seen the majority of EU countries take part. In 28 competitions, how many titles have they won in all?

During the recent Rio Olympics, many people have noticed that if EU member states had competed together under the EU flag, they would have largely dominated the medals table. That does not take into account the fact that, in most disciplines, each country can only send a maximum of two athletes.

But the countries that today form the EU have participated in most Summer Olympic Games, ever since their creation in 1896. That year, only seven of the ten participating countries are current EU members.

While the map represents EU members on the basis of the number of gold medals won snce 1896 – the ranking generally reported in the press – the table below, based on data collected by Wikipedia and updated after the Rio Games, shows the number of gold, silver and bronze medals won by each current EU country since the first Summer Games. Germany clearly dominates the rankings, whereas Malta has never won an Olympic medal and Cyprus has only won a single silver medal (at London 2012).

The rankings have been affected by the political turmoil of annexations, partitions, separations that have affected certain countries. For example, Germany’s score is due to the fact we have taken into consideration all the banners under which this country as competed – some five in total: the Saarland (1952), the unified German team (1958-64), the Democratic Republic of Germany (1968-88) and the Federal Republic (1968-88). For the countries belonging to the Soviet Union (the Baltic states), we have included the medals won prior to their annexation by the USSR and those won after independence, in 1991. For the former Yugoslav republics of Slovenia and Croatia, we have included the medals won since their participation in the Olympics since independence, in 1992. For the Czech Republic and Slovakia, we have included the medals won since partition, in 1993.