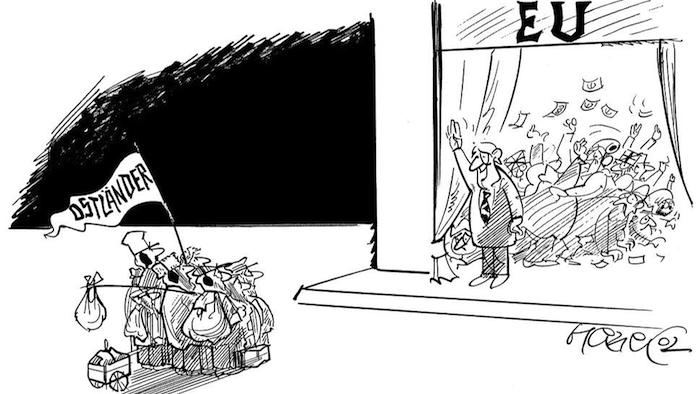 The rise of the Eastern European diplomats

Hanel  | 'Eastern countries' - A 2002 cartoon by Hanel. Much has changed since then.

The early EU years were not easy, adds Peeperkorn, reflecting on what happened after Poland, the Czech Republic, Hungary, Slovakia, Slovenia, Estonia, Latvia, Lithuania, Cyprus and Malta joined the EU on 1 May 2004 in the Union’s largest-ever enlargement —

Take for example Maroš Šefčovič, who maneuvered Slovakia into the EU and has been a member of the European commission since 2009: “I had the impression that there was a glass wall in the conference room. I saw the old guard speaking, words came out of their mouths, but I barely understood anything. Not to mention that I had no influence on the decision-making.”

Despite a training period of one year as observer, the brand-new ambassadors initially sat there as “room filler”. Tom de Bruijn, a former Dutch ambassador to Brussels, acknowledges there was “a certain sense of superiority” amongst the “old guard” of the EU15. “All these years, we were in charge. The message to the new arrivals was: we decide here how it goes; you are rookies in the game. It was a culture of mistrust.”

Pavel Telička, Chief Negotiator for the Czech Republic, recalls the first few years “madness”. While the old member States had at least seventy people in Brussels, the Czech Embassy had only four employees. “Working hard is a euphemism”, he says. [[Jokingly he calls it “modern slavery for the fatherland”.]] Not only was Brussels a maze of corridors, secret passages, rules and style, but the EU jargon was also hard to learn. “All the techniques of payments, liabilities, reserves, ceilings, supplementary budgets, it’s really high politics”, says Šefčovič.

“An additional though important problem was that precisely in those early years, the brand-new EU member states lost many of their talented officials to Brussels. Young, highly educated Poles, Slovenes and Hungarians with some European experience responded to the call of the much higher salaries offered by the EU institutions”, adds De Volkskrant.

After five years, the disparity between old and new disappeared: the ambassadors had learned to speak the codified language and became active members. “But the real baptism was the twice-a-year rotating EU presidency,” says Polish ambassador Marek Prawda. “You were thrown in at the deep end and had to show that you could steer instead of hitching a ride.”

“Ten years later”, with the Pole Donald Tusk taking office as EU President, “that’s all history,” concludes the newspaper. “More than half of the 2004 group has had a rotating EU presidency. Doomsday scenarios consisting of an EU that might collapse under its increased weight, have not proven to be true.” However, the increased tension with Russia put the Eastern member states right into the middle. “We take part in the game completely,” analyses Prawda.