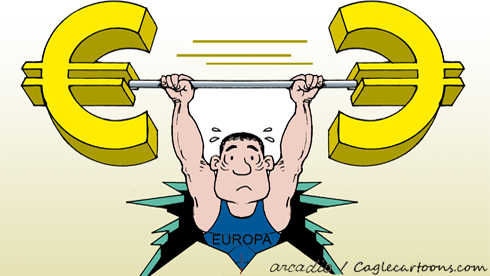 There is no euro crisis

Don’t believe this “modern myth” that the single currency is teetering on the edge of disaster. The real problem is that the losers – the less competitive countries – are growing in number day by day

The crisis has become part of everyday life. It can also be looked on benevolently: behold, fellow citizens, the worst economic crisis in history – and the euro is holding firm, our superb politicians are capable of decisive and effective action: they are saving us! Let us all respond to their urgent cries and give them more power: more Europe, more Brussels, more European Commission, more European Parliament and even more institutions. Only a United Europe is able to stand up to the challenge posed by the euro crisis. We must see the integration through!

But all of this is nothing more than contemporary myth-making to justify the expansion of state power both for unelected authorities in Brussels and for elected governments of the nation states alike. A modern-day fairy tale to justify the continued centralisation of power.

The euro crisis, though, is no fairy tale, some may argue. Or is it?

Yes, it is: the euro crisis is 100 per cent pure synthetic fabrication in crystalline form. In the first place, the currency itself is not suffering from the crisis. It could suffer from high inflation, but that is not the case for the euro, and it never has been. It may suffer currency rate fluctuations on international markets, which, far from signifying a crisis, is merely normal. All modern currencies in a free-floating regime show volatility, from the US dollar to the Japanese yen, from the British pound to the Swedish krona and the Czech crown.

There are no signs of crisis in inflation rates, nor in the evolution of the euro exchange rate, which has been strong and steady in recent years – for the layman, surprisingly strong and steady. No mystery there: a robust balance of trade for Germany, the superpower of world trade, keeps the euro in fine form. Crisis? Nonsense.

Is the euro at risk of disintegration, then? Haven’t eurosceptics been warning of the collapse of the single currency for years? Is it not vital that we all join forces, to turn the I-told-you-so smiles on the faces of the killjoy doomsayers into scowls?

No. The Eurozone is not threatened with break-up. It never has been, not even for a second. We have to look at how the mechanism of the Eurozone actually works. No country can be excluded from it, and no member state can be evicted against their will. Not even if they faked the statistics, not even if they go bankrupt, not even if their people paint a Hitler moustache on Angela Merkel (which already happened in Greece, and Greece is still using the euro). Eurozone member states may leave voluntarily, but none so far have grabbed the chance. Leaving the Eurozone would apparently be tantamount to departing the EU as such. That would mean shutting the doors on the zone of free movement of goods, persons and capital – that is, the loss of a few real and uncontested benefits of belonging to the union. No state will risk re-establishing tariffs against its exports to the EU countries. Who, after all, would voluntarily want to cope with the de facto trade sanctions?

Of course, one can argue that free trade and similar freedoms existed before the euro was introduced. At the moment, however, there is no way to withdraw from the Eurozone without exiting the EU entirely. We cannot expect Eurozone member states to allow an exit that would maintain the benefits of membership while getting rid of the drawbacks.

That’s why not even Greece wanted to get out. Nor Cyprus.

No one wants to kick anyone else out of the Eurozone, and no one wants to leave. End of story. No collapse looms up over the horizon. Eurosceptics rejoice in vain, and the euro-optimists have nothing to be afraid of. The euro will still be in business for a long time yet. How long we cannot say, but monetary unions of the 19th Century worked for decades, until the First World War put an end to their normal existence.

The authors wanted it that way, but the story does not end there. The euro is not in crisis, but a good many of the EU member states who use it certainly are. Many, in particular the economies of the Latin states of the union, need a weaker currency to make their products more competitive and to attract more tourists. France’s trade balance is sinking into the depths day by day. Its trade with the other Eurozone states last saw positive figures in March 2000. We could continue in this vein for some time.

Unlike the monetary unions of the past, the euro rules out the possibility for member states to devalue their currencies. The creators of the common European currency, after all, wanted it that way. The politicians that dominated their numbers saw currency devaluation not as a standard tool of economic policy, but almost as a tool of unfair competition for their neighbours with stronger currencies.

According to the vision of the fathers of the euro, member states should compete with each other in hard work, productivity, quality and innovation. It was a nice idea, but no one thought of what to do when someone loses.

And now most of the Eurozone is losing. The Germans, who are used to a strong currency and whose banks never blew a credit bubble, are the winners. The same is true for Austria, and for Luxembourg, the financial centre of the continent. Malta, another financial centre, is doing well. For Slovakia, which joined the Eurozone recently, it is too early to say. But with that, the list of winners is practically exhausted. Not even Finland is in great shape these days.