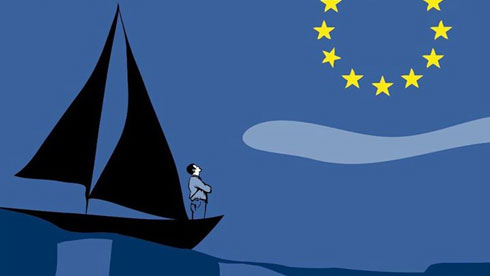 There will be no anti-EU wave

Notwithstanding predictions announced by many commentators, expert opinion has it that anti-European parties are unlikely to achieve a major breakthrough in in European elections next May. However, this will do little to mitigate Europeans" disaffection with a parliament that they perceive as remote from their concerns.

“By dint of writing of horrible things, horrible things eventually come to pass.” In these troubled times, we might readily apply to Europe the words of actor Michel Simon, playing an author of detective novels who, in the comedy Drôle de drame, fears being murdered. By dint of predicting horrible things about Europe, they eventually come to pass. “If we have a Europe that is ashamed of itself, it will be the extremists who will prevail”, European Commissioner Michel Barnier has warned. “There is nothing worse for Europe than staying silent, and hugging the walls.”

With six months to go before the elections, let us not be intimidated by Marine Le Pen, who is trumpeting loud and clear that her party will win them. In France, perhaps. In Europe, certainly not, if we are to believe the president of the European Parliament, Martin Schulz, who has already done and checked his calculations.
Right-wing extremists may vote in up to 90 deputies. And yet they remain split: the English europhobes of UKIP, allied with the Polish agrarians of the Polish People’s Party (30 seats), do not want to associate with the friends of Marine Le Pen (40 seats), who want nothing to do with the Greek neo-Nazis of Golden Dawn or the Hungarian neo-Nazis of the Jobbik party (20 seats). Everyone has his untouchables. On the left, the extremists would consist of independents (15 to 20 members) and friends of Jean-Luc Mélenchon and Die Linke (50 members). In total, the anti-Europeans would rise in number from 100 to a maximum of 160 members.

This relative European resistance, in an assembly of 764 members, is explained in part by the discipline of the former fascist dictatorships: [[Germans, Spaniards and Portuguese do not vote for the extremes]]. The right is occasionally muscular, like the Bavarian CSU; nationalist and regional, like the Spaniards, but it always remains beyond the pale of acceptable parties. But let us stop this unhealthy relish in announcing the worst to Strasbourg: the pro-Europeans – the Social Democrats (PES), the Greens, the Liberals, and the Christian Democrats (EPP) – would have at least 530 seats, down from the current 610.

Nothing can be taken for granted

These simulations, based on polls and recent elections, also show that nothing can be taken for granted about the polarisation of the Strasbourg Assembly: the PES would bounce back and, with 220 seats, be on an equal footing with the EPP. The losers will be the Greens (down to 40 from 58) and the Liberal Democrats (down to between 60 and 70 seats, from 85). Here's the rub: Strasbourg may find itself, as happened in Germany, putting together a grand coalition. This alliance of necessity, though, risks reinforcing the notion that everything has already been decided on in Europe, which will feed massive abstention. The decline seems inexorable. Participation, which was 62 per cent for the first election of MEPs by universal suffrage in 1979, fell to below 50 per cent in 1999 and to 42.5 per cent in 2009.

It’s puzzling behaviour indeed by voters, who are voting less and less while MEPs are constantly acquiring more power. Once upon a time they had only the right to approve the non-agricultural budget of Europe – i.e. almost nothing – and to vote on resolutions on the Grenadine Islands, to recall a joke by Jacques Delors. Today they co-decide on all European legislation.

There are three explanations for this indifference. Firstly, the European Parliament contents itself merely with endorsing or modifying from the sidelines the compromises reached between the member states and the European Commission. Secondly, the real debates are at the national level. And lastly, the Strasbourg Parliament will never be a genuine Parliament because it does not represent the peoples of Europe.

This is what is alleged by the Constitutional Court of Karlsruhe, which explains that the Maltese are overrepresented compared to the Germans. A little modesty would be in order here, since we know that the Chamber is dominated by the large German-speaking contingents of the EPP and the PES.

[[The fundamental problem is that there is no “European demos” or European people, at least not yet]]; the citizens of the old Continent do not recognise the legitimacy of an assembly that works based on complex divisions (left-right, North-South, founders-new members, etc). The votes of MEPs most often cluster around a moderate European balance – but that prevents a traditional democratic confrontation, which disorients the populations. Add to this the schizophrenia of the parties, which are European in Brussels but are tempted to head up their lists with candidates that avoid talking too much about Europe during the campaigns on home ground.

[Former French President] Valéry Giscard d'Estaing felt he had made a mistake by insisting that MEPs be elected by universal suffrage starting in 1979. He was not entirely wrong: the European Parliament has no roots in any populations, it is disconnected from the national representation, and it will not save itself through its works. It must be re-anchored in European soil. In Europe, however, no one knows how to dismantle institutions. Instead, one piles on another to get things back on track. To manage the economic and monetary policy of the euro area, it might be advisable to establish a congress that brings together MEPs and national MPs. This would be an assembly in which citizens might recognise themselves.