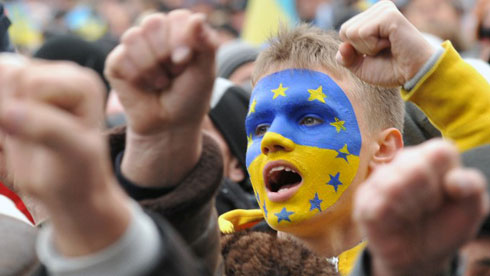 This is not a garden party. It’s a revolution!

The young Ukrainian poet Taras Malkovych on the protests against Yanukovych, the true balance of power in his home country, and the important role that Vitali Klitschko has played.

During an protest in Lviv, in western Ukraine, on December 1

“Did I already tell you what the violence at the protests against Yanukovych was all about? No? It’s important that it not be misunderstood. Now everything is up for grabs. We want to overthrow the head of state, but we’re peaceful.” Taras Malkovych, born 1988 in Kiev, where he still lives, is a young Ukrainian poet. This week he’s visiting the Villa Decius in Krakow on a scholarship. Soon he will be travelling with his father Ivan, himself one of the Ukraine's most important poets, to New York.

What really drives Taras Malkovych, though, is the fate of his nation. A few days ago at an event with writers held during one of the demonstrations on Kiev’s Independence Square Malkovych read out his latest poem here to an audience of 50,000. The poem is about the family of an executioner that has been in the business for generations. But the youngest scion has fallen out of step; the boy is not even playing war games with the neighbourhood kids. The son of the executioner can’t stand the sight of blood. His father tries to get him back onto the right path every way he can.

“It was hugely stressful to speak in front of so many people. But when I finally said it was not a party, that we should not forget that ‘This is a revolution', there were cheers. Finally, even apolitical people have grasped what means Russia for us: always the same thing. There are just different variants of oppression and subservience, which alternate with each other. Many people have grasped that only since November 21 and the first bloody suppression of the protests. But it’s been clear for a long time. The pro-Russian side is not even trying to hide it."

In the cultural field, Dmytro Tabachnyk, minister of education, is a good example of the trend. “When he travelled around the country in the summer he gave an interview in which he, believe it or not, said that Ukrainian is 'an unnecessary language'. And that’s the minister of education of the Ukraine speaking.”

[[Far more dangerous, Malkovych believes, is businessman Viktor Medvedchuk, who has been pulling strings in Ukrainian politics for years]], though for the last few years he has kept a low profile. On Putin’s visit to the Ukraine in the summer the Russian president talked for only a quarter of an hour with Yanukovych, and much longer with Medvedchuk, who is referred to in the Ukraine as “the Cardinal” or “The Godfather”. Putin, in turn, is the godfather of Medvedchuk’s daughter. “In writerly circles Medvedchuk was already known of before I was born,” says Malkovych. There was once a poet and dissident, Vasyl Stus, born 1938, who, a generation after Varlam Shalamov, was sent to the Siberian Gulag, to Magadan. In 1980, home from the camp, a new lawsuit was brought against him. The young lawyer Medvedchuk was appointed his defender. “As his lawyer, he worked very hard to have Stus sentenced to death.” Stus died in a Soviet forced-labour camp in 1985 following a hunger strike.

Viktor Medvedchuk, who could take over from the hardly more electable Yanukovych, has the right wife: 30-year singer and TV presenter, Oksana Marchenko, host of programmes such as the Ukrainian version of Everybody on the Dance Floor. “While the peaceful demonstrations were being put down,” Malkovych says, “a group from the brutal security police, Berkut, got out of a car carrying the name of the show on its sides. It’s hard to see that anymore as just random cynicism.”

[[Nowhere does the fundamental principle of the independence of literary writers gain more importance than in politically difficult times marked by the manipulation of information]]. The concept of “engaged writer” long ridiculed in the West, is expressed here in a simple and straightforward way. On his first day in peaceful Krakow, it’s obvious that Malkovych, who has already translated a collection of Irish poetry, and German poetry as well – by Heine, Goethe and Brecht – can hardly restrain himself from heading home to Kiev to support his friends.

“One of them called me up at four o’clock in the morning from St Michael's Cathedral, where he went for protection with others who had been injured. But maybe from here I can also help to make sure that the rest of the world won’t be fobbed off with lies. In the week between November 30 and December 3, the State Prosecutor of Ukraine has brought 53 charges against peaceful demonstrators, some of who are lying in hospital beds. They were caught up among the hooligans, who were hired to provoke the Berkut and then ran away from the scene. And where there was a hooligan for hire there was also a Russian camera to capture on video just how bad the demonstrators are.”

For Malkovych, Vitali Klitschko is extraordinarily important for the Ukraine. “We haven’t got to the point that just anyone is accepted as a leader. Nothing makes more of an impression than when Klitschko grabs a hooligan by the collar during a demonstration and gives him a talking to. A strong democrat is the best character to identify with.”