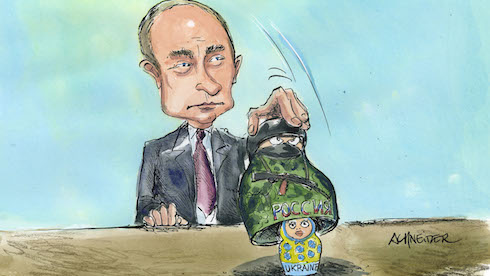 As Donetsk and Luhansk burn while its people suffer from constant bombardment, hunger and lack of basic amenities, many have criticized or even blamed NATO and the EU for failing to end this tragedy. But it is time to face some bitter truths and abandon long harbored illusions, writes Jacek Żakowski in Gazeta Wyborcza –

European Union is no superpower. It’s a beautiful project that gave West Europe half a century of peace and that may in due course, e.g. in 50 years, give birth to a superpower. Or it may not - if we don’t pamper and nurture it well enough. So far it’s a union of states that struggles hard to unify. It’s even a bit scary to expect too much of it as it comes apart at the seams much easier than it knits together.

Neither NATO, despite all its effectiveness as a defense pact and deterrent, is a good tool to restore and build a global order. Its members are divided and ‘have different views about what the order should look like’, argues Żakowski, asking a few tough questions –

Will NATO risk a total nuclear war and the destruction of the world should Russia attack Bulgaria? Will the Germans and Spaniards be willing to die for Sofia or Warsaw? You will not get the answer from the Americans, Germans or anybody else in the world.

In theory, the United States could be the policeman of the world, but in practice ‘it hasn’t won a serious war since 1945, not even in Iraq’, writes Polish columnist adding that –

Great is the power of the West. But this is a lazy, divided, play-it-safe power mainly caring about its own comfortable life. Given all these weaknesses it is faring quite well nonetheless. But one should not expect too much of it. In the real world only uncertainty is certain. The rest is a delusion.