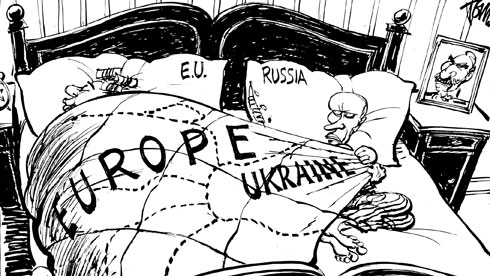 Toying with a market of 60 million consumers

On November 19, the Ukrainian Parliament again delayed a vote on freeing opposition leader Yulia Tymoshenko, further jeopardising the signing of an EU association agreement next week. If signed, the deal would ease trade with a market that Russia jealously guards.

Red and yellow umbrellas, folding tables, large banners. Although Ukraine is highly unlikely to sign an association agreement with the European Union anytime soon, it is the political football in the game being played in Odessa’s Sobornaya Square. Signatures are being collected here both by advocates of the EU agreement and by those supporting Ukraine’s unification with Russia. On the one side are the nationalists of the Svoboda and Batkivshchyna parties, on the other the communists and those from the Rodina Party.

The leader of the latter, former deputy Ihor Markov, has become a recent victim of the geopolitical game that is being played to settle Ukraine’s future. He was arrested in late October on hooliganism charges and sentenced to remain in custody until 20 December. His supporters say he was arrested because he was too pro-Russian, even for the pro-Russian Party of Regions. His opponents simply call him a Russian agent who has become too dangerous even for President Viktor Yanukovych.

Discreet charm of the empire

Signs of former glory can be found all over Odessa. The Art Nouveau tenement houses are beautiful but in a state of such disrepair that you fear to enter them lest the roof collapses on your head. [[Virtually everyone speaks Russian here, which is the lingua franca in shops, offices and restaurants]]. The only place where only Ukrainian is spoken is the local headquarters of the Svoboda party. According to Pavel Kirilenko, the outspoken thirty-something who represents the party in the Ukrainian parliament, the Verkhovna Rada (Supreme Council), an association with the EU is still possible and remains the only viable option for the country’s future.

“Regardless of how the case of Yulia Tymoshenko is settled, the EU should agree to sign the agreement”, says Mr Kirilenko. This, he believes, will not only help to boost the struggling Ukrainian economy, improve political standards and reduce rampant corruption, but will also enable Ukraine to finally become truly independent of Russia. “The costs may be high: a boycott of Ukrainian products in Russia, perhaps even an attempt to cause the Crimea to secede from Ukraine. But the sooner we do it, the better,” argues the young deputy.

In Odessa, the question about integration with the EU is in fact a question about Russia. Mr Kirilenko is openly happy that the “Russian agent”, as he calls him – the influential Ihor Markov, leader of the Rodina party – has been put in jail. Until recently Markov was a deputy for the Party of Regions and was considered a close associate of the ruling “Donetsk lobby”. But his views are controversial even by Ukrainian standards: Markov considers Ukraine to be a "temporary state" which should return to the fold of the Russian empire.

Having said that, the official reasons for his arrest sound a little phoney. Back in 2007, Markov led a successful campaign for the erection in Odessa of a monument of Empress Catherine II. During a protest staged by the Svoboda party, fighting ensued and Markov reportedly hit one of the protesters. Until recently no one paid much attention to this incident. Now, however, Mr Markov has been stripped of his immunity and detained.

The Yulia of Contention

Before his arrest, there was no doubt that Ihor Markov, who hung a portrait of Vladimir Putin in his office and spent more time in Moscow than in he did Kiev, was a pro-Russian politician. According to Radio Svoboda journalist, Ivan Shevchuk, he was part of a huge campaign, controlled directly by Moscow, which aimed at to prevent Ukraine from entering into an association with the EU. “No one can count it, of course, but immense sums of money have been earmarked for the purpose,” says Mr Shevchuk.

Vladymir Mamonov, a pro-Russian entrepreneur, says the association agreement would be a “disaster” that would kill the Ukrainian economy: “[[We have solid connections with other post-Soviet states. You cannot separate connected vessels: without access to the Russian market and without Russian gas, the Ukrainian economy will be hit extremely hard]].”

Besides, Mr Mamonov is irritated by what he calls pesky pro-EU propaganda. “Pat Cox and Aleksander Kwaśniewski [the former President of the European Parliament and Polish President, who are heading a European Parliament mission in Ukraine] should not be telling a sovereign country to change its laws for the sole reason of freeing Ms Tymoshenko,” he adds.

According to Shevchuk, this latter condition has been unacceptable for President Yanukovych from the very start: “He is really afraid of losing the presidential elections, and if Ms Tymoshenko is freed, his victory may be in jeopardy”.

According to the Radio Svoboda journalist, Mr Yanukovych has two goals: for his family to become Ukraine’s wealthiest (his son, Alexander, is already one of the leading oligarchs), and to govern as long as possible. To achieve the latter, he needs money – and it doesn’t matter whether it comes from Russia or the EU.

That’s why the best decision for President Yanukovych would be no decision at all. He certainly doesn’t want the association agreement with the EU, nor is he interested in joining the customs union with Russia, Belarus and Kazakhstan that Moscow is so forcefully touting. In his ideal scenario, Mr Yanukovych would prefer to continue the “multi-vector” strategy of the former president Leonid Kuchma: taking money from wherever possible in exchange for hollow promises. The problem is that this policy has run its course, and there is no going back now.

The country’s economy is in dire straits and the government needs money ahead of the 2015 presidential elections. It can take it from the East or West, but whoever donates will dictate conditions. Moscow has been a tough negotiator and Mr Yanukovych’s visits there have produced no breakthrough. The Kremlin wants Ukraine to join the Customs Union because Russia wants to control Ukrainian industry – and that is something that directly threatens the interests of Yanukovych and the oligarchs close to him.

According to Voice of Russia journalist Dmitry Babich, Moscow needs to maintain its influence in Ukraine if it wants to remain a global power: “The issue is purely an economic one. If Russia wants to be a financial hub, it needs a market of at least 200 million consumers. Its own population is 140 million. How can it find another 60 million? The answer is obvious – by persuading Ukraine to join the common economic zone,” explains Mr Babich. However, political motives also lurk behind this economic reasoning. One thing is certain: even if the EU-Ukraine association agreement is not signed at the Eastern Partnership summit in Vilnius on 28-29 November, it will not be the end of the game over Ukraine’s future – but only its beginning.