Belarus
Alexander Lukashenko (third from the left) at the summit on Ukraine in Minsk, 27 August 2014. 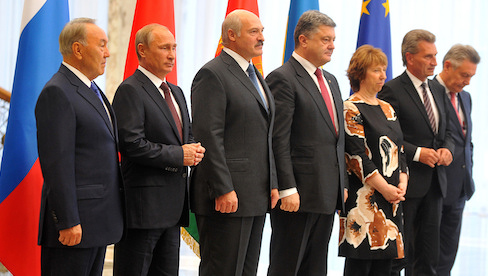 Alexander Lukashenko (third from the left) at the summit on Ukraine in Minsk, 27 August 2014.

“If one country has benefitted from the Ukraine crisis, it’s Belarus,” writes Nezavissimaïa Gazeta, noting Minsk has recently brushed off its international pariah status and that the peers of President Alexander Lukashenko no longer treat him as the leader no one wants to be seen with. But if Belarus’s role in the negotiations to resolve the Russian-Ukraine conflict has given a new appearance to “this state run by the ‘last dictator in Europe’” and flung it to the forefront of the European political scene, this “is just the beginning”, writes the Russian daily.

For Nezavissimaïa Gazeta, Lukashenko’s “weathervane strategy between Russia and the West has been successful so far”, showing the political savvy of a leader who —

In this regard, writes the daily, Lukashenko —

could try to transform Minsk into a “global platform” for relations between Russia and the West […]. Or also a financial hub for the European Union and the Customs Union, with which the Europeans already dream of creating a free trade area. Such a project, which could put Belarus on the forefront of Europe, improve its image and offer it significant economic benefits, can only be of interest to Alexander Grigoryevich Lukashenko, who never ceases to promise an extraordinary destiny for his country.