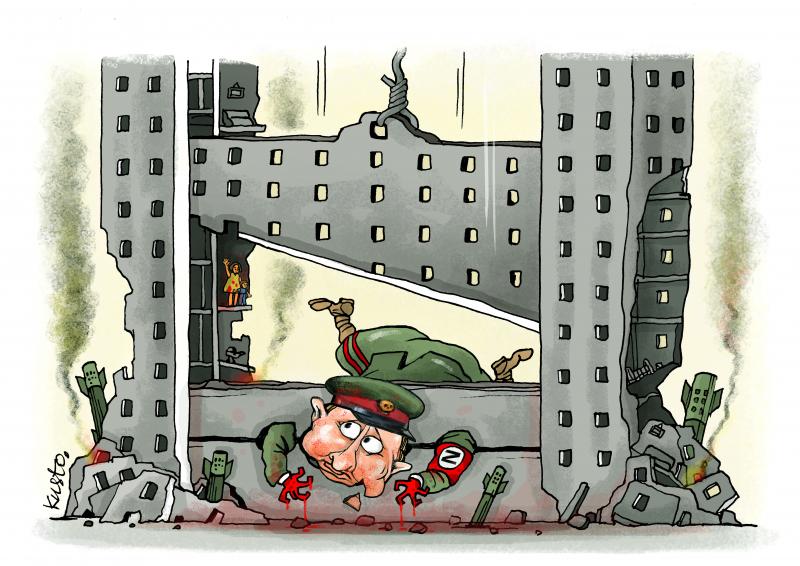 Ukraine war opens the wound of Estonia’s Soviet past

For Estonian historian Aro Velmet, the war in Ukraine has revived the never fully resolved tensions between the former Soviet republic and the former colonial power. Starting with the place of the country's large Russian minority in society. First part of a new series of essays on the war in Ukraine seen by authors from Central and Eastern Europe.

I was about as far away from Ukraine as possible, when the war started. On 24 February, when Vladimir Putin announced his “special military operation”, my home country Estonia was celebrating 104 years of independence, and I was teaching a history class on apocalyptic movements in Los Angeles, 10 000 km from Ukraine. The distance from Tallinn to Kyiv is exactly ten times less.

What a difference 9,000 km makes. A friend told me he couldn’t sleep, because he kept reaching for his phone to scroll through the latest news from the front. Another friend was stocking up on canned goods and generator fuel. Relatives of mine, a couple with two young children, were discussing which country they should flee to, if push came to shove. “I don’t really think Putin is going to invade here – but it doesn’t hurt to be prepared” – was how most people expressed their sentiments at the time. I found myself following a similar logic.

Surely, they were overreacting – but then again, that’s what everyone said before 24 February as well.

In Los Angeles, Ukraine was – unfortunately – easier to compartmentalize. Fewer people had personal connections to the regions, news reports from the war were quickly overshadowed by discussions of rising petrol prices, and the rightward turn of the supreme court, while attempts to make sense of the crisis were confounded by suggestions that the war was a product of NATO overreach, and therefore, like everything else in this narcissistic country, ultimately about the United States.

Occasionally, someone would remind me that LA was not a different world after all. One student told me they had a Ukrainian designer at the indie game company she worked for. The designer had missed several deadlines lately – he was working from Kharkiv, and he kept getting interrupted by air raid signals.

By the time I returned to Estonia in early May, the war had become a part of everyday life for most everyone I knew. Initial panic about a possible Russian invasion of the Baltics had been replaced with a sober push to support Ukrainians at home and abroad. To date, Estonia has received over 40,000 refugees. That is comparable to the number of refugees in the UK, which has a population over fifty times larger than Estonia, or a rate of over 300 per 10,000 population.

The cultural center across the street from my house had become a volunteer hub, where people collected and sorted through donations. One friend was sending out e-mails asking for help delivering fuel to refugees they had housed in a spare apartment. Another one was arranging deliveries of medical supplies to the front. Everyone was still losing sleep because of endless scrolling.

Politically, the war brought to the surface tensions that some thought had long been buried, and made others much, much easier to see.

One conservative politician, who had consistently fought against EU resettlement policies during the Syrian refugee crisis a few years ago, was now proclaiming that Eastern European states could surely not shoulder the influx of refugees alone, and calling for more solidarity from the Western members of the Union. I was reminded of the old definition of the term ‘chutzpah’ by Leo Rosten: “that quality enshrined in a man who, having killed his mother and father, throws himself on the mercy of the court because he is an orphan.”

After a brief period of being uncharacteristically quiet, the far-right Conservative People’s Party attempted to play its usual “immigrants coming to take our jobs” tune, but thus far, it seems to have fallen on deaf ears. Perhaps this isn’t all that surprising. Suddenly, Estonian mainstream media seems to have lost all interest in moral panics about why refugees arriving in Estonia have such expensive phones (also known as run-of-the-mill smartphones), whether they could be carrying exotic diseases or if their values were compatible with Estonian culture. The Ukrainian crisis has made it clear as day that the racist hysteria surrounding refugees was never a far-right phenomenon alone. It was shared by mainstream media and the political center.

The war brought to the surface tensions that some thought had long been buried, and made others much, much easier to see

Recently, human rights organizations protested a draft law that would permit expelling people at the border without processing their asylum claims “during a period of emergency or a threat to national security.” Eero Janson, the head of the Estonian Refugee Council has called the proposed law “without a shred of doubt in violation of the 1951 Refugee Convention, the European Convention on Human Rights, not to mention European Union law.” The war in Ukraine has changed Estonian politics less than one would have hoped.

The issue of the Russian minority in Estonia has proven equally toxic, politically speaking. From the first days of the war, the crisis has played into the hands of those political forces – by and large on the right – who have been warning about the threat of the “Russian bear” for years. Emboldened by this vindication, they have now gone on the offensive against all sorts of windmills, that accomplish very little in helping Ukraine win the war but help score political points for local nationalists.

For instance, the question of whether Ukrainian children should attend school in Estonian or Russian has now become a fight over the decades-long attempt to end Russian language instruction altogether. The moderate right insists that Ukrainians attend school in Estonian, while local officials point out that without the help of all schools, regardless their language of instruction, the sheer number of refugee children would overwhelm the education system. The far right has accused the coalition government of engineering a conspiracy where refugees are used to retain and expand Russian schools. Nobody seems to care about what Ukrainians themselves would prefer.

Politicians across the spectrum have suggested curtailing the rights of the Russian minority in a variety of ways, ranging from restricting their right to own firearms to revoking the right of Russian citizens permanently residing in Estonia to vote in local elections. That Soviet era monuments have to be taken down has, by now, become pretty much accepted wisdom. In May, two of the largest universities in Estonia decided to refuse admission to Russian and Belorussian citizens in the upcoming academic year. The rector of Tallinn University, the third largest university in Estonia, wrote an impassioned article defending the right to education irrespective of nationality, but was outvoted by the university senate.

Last week, a friend took me to task for retweeting an article by an Russian-Estonian politician that accused the Estonian government for its long-term neglect of Russian education, media, and culture. No wonder plenty of Russians in Estonia did not condemn Putin’s aggression! No wonder they believe this talk of denazification, the author exclaimed. That is, by all accounts, a fair point.

My friend – you could see his face turn red – thought this was deflecting responsibility. “Do Russians have no agency at all in this matter?” he asked. “At what point do we stop talking about the state’s failure to do this or that and just say, wake the fuck up, look at what is going on, and stop repeating Putin’s bullshit?”

Truth is, I understood where he was coming from as well.

Four months into this damn war, Tallinn feels much like Los Angeles did back in February. People are talking about inflation, about the collapse of the coalition government, about the upcoming heatwave, and their holiday plans, which are proceeding as usual. News from Sievierodonetsk still make the front page, of course. This is not, after all, a different continent. The Refugee Council complains about the government not cooperating with NGOs and leaving newly arrived refugees without assistance on the border in Narva. On the national broadcaster, there is another call to consign Soviet-era monuments to “the dustbin of history”.

A thousand miles from the front, in the first days of the summer, it is easy enough to pretend that everything is the same. But it is not. It is worse. It is always a little bit worse.