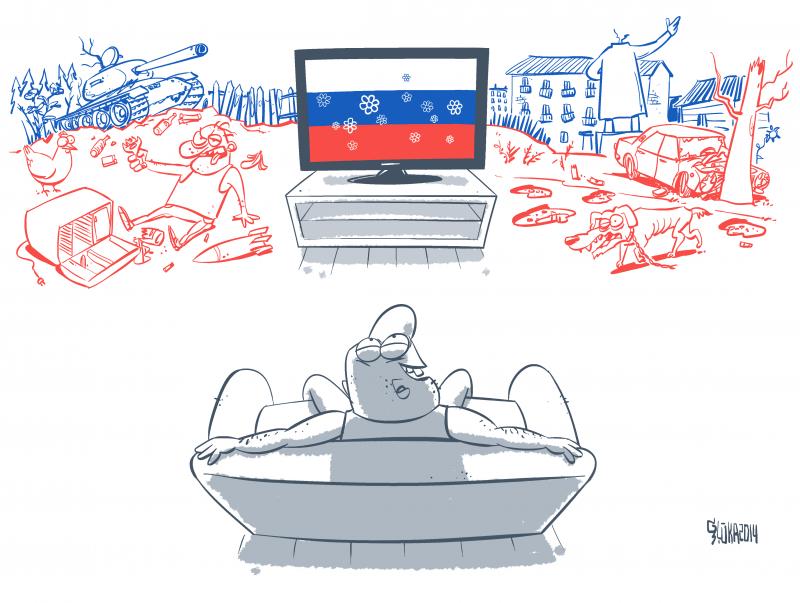 The Baltic countries, a safe haven for independent Russian media

Banned or threatened with closure since the start of the invasion of Ukraine, several independent Russian media – including Meduza, Novaya Gazeta and Provereno – have fled Russia to neighbouring Baltic countries.

Vilnius, June 2022. The famous Russian daily Novaya Gazeta Europe – whose editor-in-chief Dmitri Muratov was awarded the Nobel Peace Prize in 2021 – published its first edition in exile a few days before 9 May in Latvia. The date is symbolic in Russia, marking the end of the Second World War and the victory over Nazism. In the Baltic states it is also controversial, having triggered fifty years of Soviet occupation. In his editorial, the young editor Kirill Martinov reiterated his opposition to the ongoing war. "We want to be the voice of Russians who will never accept Putin's war and who advocate European values," he said. Although the newspaper is not expected to be published on a regular basis, this first issue is there to "show Russian society and the authorities that we are still alive," says Martinov. He is speaking from his office just a few metres from Milda, the Latvian monument to freedom.

The internet, and especially those social networks still allowed in Russia such as Telegram, are now the place where Russia's exiled press can speak out. Ilya Ber has settled in Tallinn, Estonia, where he continues to work as an editor for Delfi, a popular news website in the Baltic states. A few years ago, he founded his own fact-checking site, Provereno ("I check" in Russian), which has already been the source of many exposés. One of them concerned the photo of the young pregnant woman fleeing the Mariupol maternity hospital and accused of being an actor. Provereno is now working with its hosts at the Estonian news outlet, as well as with other Russian media based in the Baltic countries. Among these is Meduza, which found refuge in Riga, Latvia, in 2014.

Working remotely is simple enough for these Russian journalists: since the Covid-19 pandemic, everyone has been doing it. Irina Shcherbakova is no exception. She writes for the Moscow Times from the small town of Jurmala, on the Baltic coast a few kilometres from Riga. The choice to settle there was a logical one for this woman who spent her summer holidays there as a child. She left Russia because of the war and was briefly arrested on 24 February.

"I prepared an article on pro-war propaganda in Russian schools and on the 'Helping to Leave’ foundation, an NGO that helps Ukrainian refugees flee Russia. I continue to cover the war and everything related to it," she explains. In Russia, Irina Shcherbakova wrote about human rights abuses, so she knew it was no longer safe to work as a freelance journalist. In Latvia, she can not only dissect Russian news for foreign readers, but also continue her work as an investigative journalist. She is currently commissioned by the online outlet Meduza to write a portrait of the opposition politician Vladimir Kara-Murza.

Kirill Martinov still has a team of journalists in Russia working for Novaya Gazeta, but the situation is getting increasingly complicated for those who remain in the country. "It is becoming more and more difficult to rely on [them]. People can no longer identify as journalists. They have become a kind of 'agent'. They can no longer get accreditation, no legal status, sometimes they remain anonymous. In some cases, they cannot be paid their salary."

These exiled Russian news organisations in the Baltic states have ambitions, and Martinov does not hide his own: "My goal is to become the voice of pro-European Russians on both sides of the border. The second thing I would like to do is to recreate an extra-territorial Russia that would be like a part of the European community. I know that millions of Russian speakers support Ukraine and the European Union in this war." Following a tradition of activist journalism, Novaya Gazeta also has the support of the Baltic authorities, which issue humanitarian visas to its journalists to settle in the region. Since the beginning of the war, Tallinn, Riga and Vilnius have otherwise suspended the issuance of visas to Russian nationals.

One month after the start of the war in Ukraine, Latvia had already issued 161 visas. However, it remains a complex issue and a source of uncertainty for many Russians who arrived on a Schengen visa shortly after the conflict began. A residence permit in the Baltic states is a crucial step towards settling permanently and resuming their work as journalists in the region. After a few weeks of limbo, Ilya Ber received the coveted document from the Estonian authorities.

The Baltic countries are not new to this situation. After the annexation of Crimea in 2014, Russian political dissidents and journalists moved to Riga and Vilnius. Galina Timchenko was then the editor-in-chief of Lenta.ru, but her critical coverage of the conflict in Ukraine led to her being sacked. She decided to move to Riga, a substantially Russian-speaking city, and founded the online news outlet Meduza.

Meduza is not a daily news source about Russia, but rather a window on the world in Russian and for a Russian-speaking audience. Eight years after the real start of the war in Ukraine, Meduza is still there, and remains an important voice among Russian media that have fled abroad. But now it too has been classified in Russia as an agent of foreigners, and this perceived smear appears on every page of its website.

Vilnius, the Lithuanian capital, is also accustomed to exiled journalists. Many of them are bloggers, mostly Belarusians who fled the repression that followed protests against the rigged 2020 presidential election. Vohla and Andrei Pavuk are among the hundred or so Belarusian journalists who have taken refuge in the capital. Originally from the region of Gomel in south-eastern Belarus, they continue to blog about issues that Belarusians cannot raise with their government without being identified and surveilled.

The exile of these Russians and Belarusians is set to last for a long time: tensions are hardening in their countries. It will be difficult to reach the people who stayed behind, yet they are the ones who most need information that is free of propaganda.