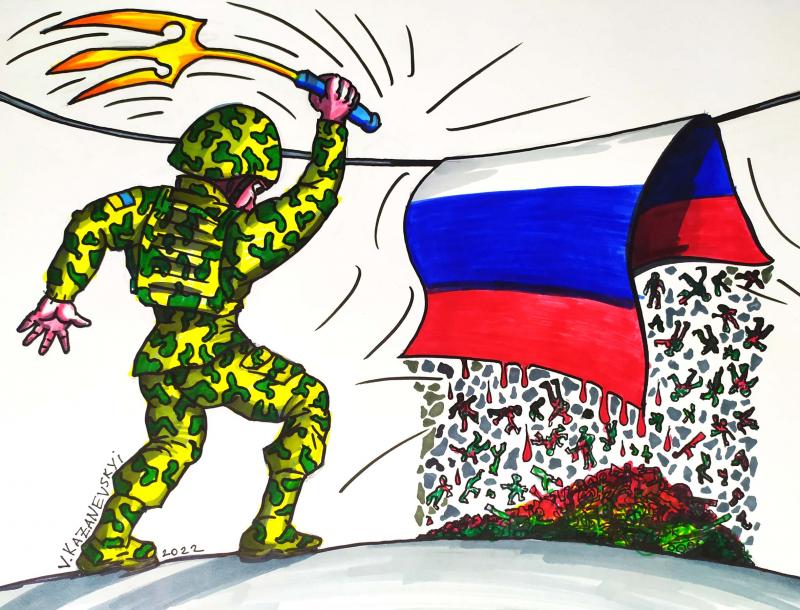 The Ukrainian Kutuzov: Who is General Zaluzhny, and why are his tactics in the spotlight?

The Ukrainians managed to thwart the blitzkrieg of the "second strongest army in the world". The key figure of the new generation of the Ukrainian military is General Valery Zaluzhny. He is the first Ukrainian commander-in-chief who did not serve in the Soviet army. Who is this general who modernised Ukraine’s army?

No one in Europe now has such experience of managing troops during a real war as Valery Zaluzhny. At, 49, has been hardened in real battles in the east of Ukraine since 2014. He has honed his professionalism not according to Soviet methods but during exercises with NATO at the best European and American training grounds. In reality, a completely new army has appeared in Ukraine. It has no continuity with the Soviet one, and works according to Western standards.

This war has shown how Ukrainian officers are able to think and act independently. In addition, the Ukrainians have excelled in new ways of fighting, using drones to destroy logistics columns and to remotely adjust fire.

In February 2022, the Ukrainians did not choose the simple tactic of holding the borders of the country "at all costs". Instead they allowed the invading columns to go deep. Then they pinched the Russian eagle from the sides, and cut off its supply chains. A tactic similar to that of the Russian general Kutuzov during the Napoleonic invasion of 1812.

First, the Ukrainian army smashed separate columns of invaders near Kharkiv, Odessa, and Mykolaiv. The enemy lost the tactical initiative, reduced its pace of advance and was forced to abandon the capture of Kiev and Kharkiv. After a month of fighting, in which the Russians suffered losses three times higher than the Ukrainians, the Russian army retreated from Kyiv and the entire north of Ukraine. Meanwhile, the line of defense in the Donbass was maintained around the large cities. All these successes confirmed both the modern training of the troops and the correctness of the tactics chosen by Valery Zaluzhny.

Zaluzhny has been called the Ukrainian Mannerheim. [Carl Gustaf Emil Mannerheim was a Finnish military leader who resisted Soviet influence in Finland in the early 20th century.]

"We want to move away from maps – from writing battle orders on the 1943 model," said Zaluzhny. It was under Zaluzhny that the Ukrainians began to actively use anti-tank systems and Turkish-made Bayraktar drones in the army. He is only the tip of the Ukrainian iceberg facing the Russian Titanic. In fact there are hundreds of "Zaluzhnys" all over Ukraine, so it is more correct to talk about an entirely new generation of Ukrainian soldiers.

The "sovok", the Soviet mentality, is dying out, says Zaluzhny. “Young people, graduates of military academies, come to us. It is very interesting to watch them – how a person who was recently sitting at a desk goes immediately to the front. Within a year, they become company commanders. These are completely different people. They don’t look like us when we were lieutenants. Everyone knows a foreign language well, works well with gadgets, is well-read," says Zaluzhny.

The military successes of Ukraine became possible thanks to this new generation of soldiers, to modern methods of waging war, and to Western intelligence data.

It has been a phenomenal success, especially considering that before the war, Western countries expected the Russians to destroy the Ukrainian army in a few days. Things did not go according to the Russian scenario.

In 2014, when the Russian-Ukrainian war began, Zaluzhny was sent to the east, where he commanded a brigade that was deployed near Debaltsov in August 2014. In 2017 he attained the rank of major-general, although he remained on the front lines. A year later, in 2018, Zaluzhny became the head of the Joint Operational Staff, and in 2019 was appointed chief of the Northern operational command. This is stationed in Chernihiv, where his mother was born and where he spent much time as a child. During this period Zaluzhny remained constantly on the front line, improving his professional skills. In 2020, he graduated from the Ostrog Academy with a master's degree in International Relations.

We stopped the enemy on all sides. We have inflicted on them such losses as they have never seen or imagined. All Ukrainians know about it. The world knows about it.

In July 2021 Valery Zaluzhny was appointed commander-in-chief of Ukraine’s armed forces, amid a major restructuring of the military command intended to separate it from politics. Zaluzhny was known for his openness, combat experience and respect for ordinary soldiers.

At the beginning of 2022, when the leadership of Ukraine probably already knew that war was inevitable, Zaluzhny would remark: "Our NATO partners had only one question – do I share their concern? I replied that I was worried once, but only once. It was in 2014, when I first got a machine gun, body armour and went to war. Then there was concern, but after that it was just a question of doing one's job."

Since the beginning of the large-scale Russian invasion in late February, Zaluzhny has avoided interviews and hardly appeared in public. Occasionally he posts short items of breaking news on his Facebook page, or motivational posts thanking the military and the people.

More : Serbia on the side of Putin’s executioners in Ukraine

Ukraine’s President Zelensky has recognized the successes of the Ukrainian army at the front and the professionalism of Zaluzhny, awarding him the military rank of full general in early March.

A poll by the news outlet Ukrainska Pravda showed that the Commander-in-Chief would become the undisputed leader of the presidential race if elections were held today.

"I want to appeal to those politicians who, from towns in the rear, talk about ‘betrayal’ and make ‘assessments’ of the operational situation. With your irresponsible allegations, for example, that the enemy took something without problems, or that the surrender of the country is being prepared, you insult our soldiers," he said.

"We stopped the enemy on all sides. We have inflicted on them such losses as they have never seen or imagined. All Ukrainians know about it. The world knows about it. I appeal to you: do not humiliate our defenders with your ‘expert assessments’. You are not the first line of defense now. And it is not your children. Everyone should do their own thing. We are protecting Ukraine," he added.

Today, it is not only the Russian and Ukrainian armies that are fighting each other. Two worldviews, two philosophies, are at war. And traditions of top-down centralisation and closedness are losing.

This article is published within our project in support of independent Belarusian media and journalists.