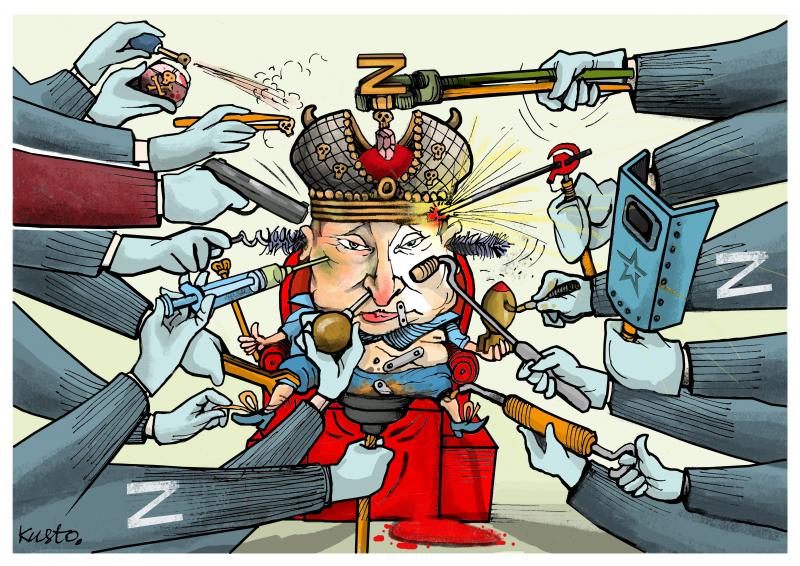 Serbia on the side of Putin’s executioners in Ukraine

Whereas the whole world has united in condemning Russia’s aggression against Ukraine, the media in Serbia have turned to glorification of the crimes by celebrating the destruction of Ukrainian cities and giving wholehearted support to the Russian armed forces to persevere in the campaign against their neighbouring country, notes Belgrade writer Tomislav Marković with horror.

“Ukraine attacks Russia!” was the headline of a February issue of Informer, the most popular tabloid in Serbia, whose owner and editor has been a confidant of President Aleksandar Vučić for decades. This surreal title is no exception in the media representation of the war in Ukraine. Rather, but is a stark expression of the Putinophilia that has reigned in Serbia for many years. Whereas the whole world has united in condemning Russia’s aggression against Ukraine, the media under the control of Aleksandar Vučić have turned to unfettered glorification of the crimes.

Tabloids, web portals, dailies, weeklies and nationwide television channels celebrate the destruction of Ukrainian cities and give wholehearted support to the Russian armed forces to persevere in the campaign against their neighbouring country. The editors and journalists of these disinformation media have fallen into a deep trance – the killing of civilians, levelling of cities and destruction of cultural monuments and churches fills them with enthusiasm and exuberance.

More : Life in the crime scene

Whereas demonstrations in support of the Ukrainians have been held in numerous cities around the world, mass rallies were organised in Belgrade at which the crowd cheered Vladimir Putin and the letter Z – the symbol of the Russian "special military operation" – was drawn  on the asphalt. The whole world shudders as it watches real-time coverage with corpses on the streets of Bucha, buildings on fire in Kyiv and Kharkiv , demolished hospitals and schools, burning cars, civilians sheltering from the Russian shells in underground stations and millions of refugees leaving their country, but the hearts of Serbian Putinophiles leap for joy. Instead of compassion towards the innocent victims, understanding for the criminals is widespread.

While his media lackeys celebrate death and destruction, Aleksandar Vučić feigns political neutrality. Serbia begrudgingly voted in favour of the UN General Assembly’s resolution that condemns Russia’s aggression in the strongest terms and demands that the Kremlin immediately cease its use of force against Ukraine, but it persistently refuses to impose sanctions against Russia. A multitude of European officials, American senators and diverse envoys flocked to see Vučić, making it clear to him that the time had come to choose: would Serbia be part of Europe or an ally of Russia? Despite all the pressure, Vučić keeps Serbia in limbo, neither in heaven nor on Earth. There can obviously be no neutrality in the case of Russia’s nefarious campaign against Ukraine. To be neutral while an executioner butchers a victim means to side with the executioner.

Serbia’s specific attitude towards the war in Ukraine requires additional clarification. Whereas in other countries Sputnik and Russia Today are in charge of diffusing the Kremlin’s propaganda, in Serbia most of the domestic media act as if they were part of the Russian machinery under the direct command of Vladimir Putin and Roskomnadzor, the federal agency for media supervision and the monitoring of communications.

However, the problem is not only in the media sphere, which is already the product of disastrous policies. Serbia has never renounced the nationalist ideology of “Greater Serbia” that led to the wars in the former Yugoslavia. The only exception was the short premiership of Zoran Đinđić, but that attempt to return to civilisation was cut short by his murder on 12 March 2003. The assassination was carried out by the very same forces that waged the wars and sought to create a Greater Serbia.

Today’s political leaders were active participants in the joint criminal enterprise [the official ICTY term]  in the wars of the 1990s. President Vučić was a high-ranking official of the Serbian Radical Party of convicted war criminal Vojislav Šešelj. His coalition partner Ivica Dačić, leader of the Socialist Party of Serbia, was Slobodan Milošević’s spokesman during the war crimes and genocide. One of Vučić’s closest associates, the minister of police, Aleksandar Vulin, began his career as a functionary of the Yugoslav Left, the party founded by Milošević’s wife, Mirjana Marković. Today’s Minister of European Integration, Jadranka Joksimović, was editor of the Serbian Radical Party’s organ Velika Srbija  (Greater Serbia), whose name speaks for itself.

No political official in Serbia has ever admitted that genocide was committed in Srebrenica. There has been no dealing with the past at the state level. On the contrary, all the political, media, cultural, church and social elites are united in denying Serbian responsibility for war crimes. Recent history has been falsified – the official version is that Serbs have always been the victims everywhere, never criminals. After serving their sentences, war criminals return to their homeland, are welcomed by the highest state dignitaries, enter the central committees of the ruling parties and are given sinecures and media space to expound their version of the truth, which the Hague Tribunal was unable to understand.

For more than two decades, nationalists have waited for Russia to enter into a decisive conflict with the “new world order”, to go to war against the Western antichrist

Countless murals sport the image of Ratko Mladić and the slogan “Serbian hero” in cities all over Serbia. Whoever speaks about Serbian crimes is declared a traitor, and a media lynch mob immediately launches a smear campaign against the audacious. At the War Crimes Prosecutor’s Office, 2,500 cases have been at the pre-trial investigation stage for years, with the obvious intention of covering them up. According to estimates by the Humanitarian Law Center , at least 6,000 unconvicted war criminals calmly walk the streets of Serbian cities.

For Serbian nationalists, the current state of peace is temporary, just like the borders in the Balkans. They still dream of a great Serbian state that will encompass Kosovo, Montenegro, Republika Srpska and parts of Croatia. The realisation of that dream is not possible in today’s order of things, but the nationalists are patient. After defeat in the wars, they retreated to their lair to lick their wounds, fuel hatred towards their neighbours and keep the population in a state of constant combat readiness though a media offensive. They should bide their time until the international circumstances change – this is one of the main narratives of Russian propaganda for the Serbian market, repeated thousandfold in articles and public appearances throughout the past decades.

For more than two decades, nationalists have waited for Russia to enter into a decisive conflict with the “new world order”, to go to war against the Western antichrist, to defeat godless Europe and the USA, and to establish a different order on Earth. They have placed faith in Putin as a messiah who will create a new heaven and a new Earth. They imagine the Russian honcho  to be an upgraded version of Slobodan Milošević – the ruler of a powerful empire with a nuclear arsenal at his disposal.

More : The spectre of war looms over Bosnia again

When Russian troops invaded Ukraine, the Putinophiles here thought the hour of the final showdown had come; they believed this was the beginning of the great upheaval in which the old order would be razed to its foundations, and from the ruins a world would arise, where sovereignty, borders and international treaties were of no import. Instead of international law and other Western trifles, the law of the jungle would prevail, as authoritarian tradition dictates.

And states that enjoyed the favour of the world’s ruler enthroned in the Kremlin, such as Serbia, would gain the right to finish what they started three decades ago: a drive to exterminate and expel other nations and religions, and to finally create the enlarged state they have been longing for for centuries, to fit their own imagined grandeur. After all, Serbian nationalist doctrine considers most of the neighbouring nations to be communist inventions, just as Putin’s propaganda claims the Ukrainians were invented by Lenin. They are all misguided Serbs, or rather Russians – they just refuse to admit it and therefore deserve to be punished.

The elation at Russia’s criminal aggression against a sovereign country may seem strange to the uninformed, but for those of us who live in the heart of darkness this is logical and to be expected. In a country, whose heroes are Slobodan Milošević, Radovan Karadžić and Ratko Mladić, it is only logical that Vladimir Putin or one of his butchers who kills civilians in Irpin, Mariupol and Kharkiv be declared heroes.

The public, which mostly thinks the massacre in Sarajevo’s Markale market was staged, and that the dismembered corpses were actually dummies, will easily believe the very same type of propaganda story about the massacres of civilians in Bucha.

If the media hyenas regularly deride the victims of the Srebrenica genocide in prime-time TV programmes, why would they not feel glee at seeing the victims of Putin’s crimes? As the great Serbian writer and thinker Radomir Konstantinović said three decades ago: “We live in a world (if this is living) in which the monstrous is coming to be natural, and the natural monstrous.” To this day, unfortunately, his diagnosis has lost none of its accuracy.