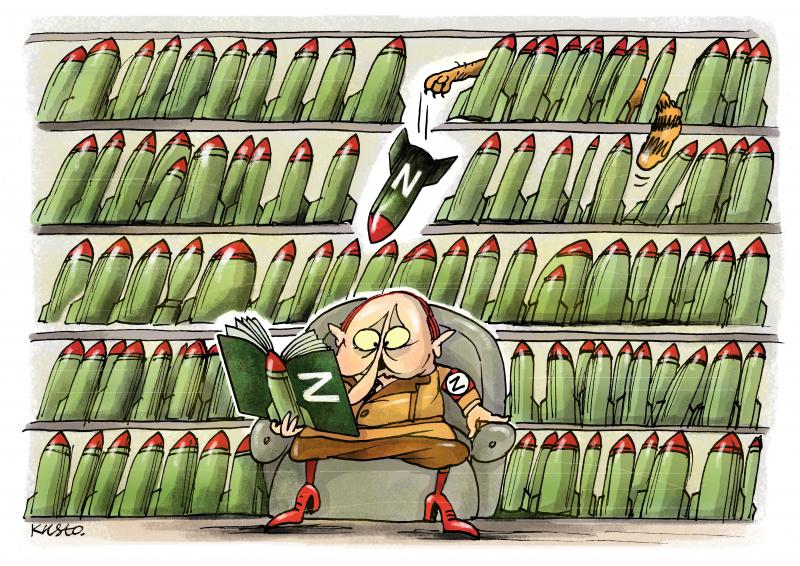 Reacting to recent text by Marxist philosopher and political scientist Slavoj Žižek, Ukrainian-born writer Vasile Ernu argues that Russia's lack of soft power and fear of losing influence is the key to its aggressive attitude – which will eventually lead to its defeat.

Slavoj Žižek, one of the leading thinkers of the West, who has  his origins in the "Communist East", wrote the other day in The Guardian:

'Yes, the liberal west is hypocritical, applying its high standards very selectively. But hypocrisy means you violate the standards you proclaim, and in this way you open yourself up to inherent criticism – when we criticise the liberal west, we use its own standards. What Russia is offering is a world without hypocrisy – because it is without global ethical standards, practising just pragmatic “respect” for differences. We have seen clearly what this means when, after the Taliban took over in Afghanistan, they instantly made a deal with China. China accepts the new Afghanistan while the Taliban will ignore what China is doing to Uyghurs – this is, in nuce, the new globalisation advocated by Russia. And the only way to defend what is worth saving in our liberal tradition is to ruthlessly insist on its universality. The moment we apply double standards, we are no less “pragmatic” than Russia.'

Russians fear they are losing Ukraine for good

One of the great causes of war – the Russians say it out loud – is the fear of losing Ukraine for good. That is, Ukraine has entered the phase where it will be lost forever. And not necessarily in the sense of an administrative territorial component, but in a much deeper sense.

We are talking about Ukraine being cut off from Russia in an almost metaphysical sense: of total alienation, of having radically different values. That, from a common cultural space, it becomes a foreign and even enemy space. And it is the same with Belarus. Russia fears that it is losing its influence and appeal in a space it considers to be intimately a part of itself. And that loss of identity is their abyssal fear.

This fear of a total loss of Ukraine, out of reach of the "Russian world", is a terrible Russian dread and anguish. Ukraine is a symptom of their fear of self-destruction. How real this fear is I cannot tell. But there is an important cause here. In fact, there is more than one.

I have had these discussions many times with Russian, Belarusian and Ukrainian friends. For more than 15 years.

More than ten years ago I had coffee in Kiev and Minsk and talked with friends of my generation. The thing that stood out to me was that all the youth and all the urban hipsterism was connected to Warsaw, Berlin, London, Budapest, the Central European University, the USA.

Moscow and Saint Petersburg, which is just around the corner from them and is their former old capital, was in their imagination something further away than New York. This distancing happened in just 20 years. Their parents and grandparents who were educated in the two capitals of the empire had grandchildren and children who wanted nothing to do with the two new centres.

Where is your soft power?

I repeat, this happened in 30 years at most, during the Putin regime, even if it started in the Yeltsin era. The break began radically, with my generation in the perestroika era, when we declared ourselves to be "the last Americans" – we were more American than the Americans. It's a long story: in my book, The Last Dingo Children, I explain this phenomenon.

My line is simple: rebiata, my dear ones – you've got the strategy all wrong. This means that you Russians, the Russian state, the two capitals, the major urban centres, have nothing to offer them: "love by force is rape" says the Russian proverb. Where is your soft power? Vâ je Imperia, sila? as Pelevin says in Generation P – aren’t you the Empire, a smashing force?

Where is your soft power? What do I mean by this? I mean the economy, the huge investments in education, attractive universities, technology, mass culture, cultural centres, urban centres. Where's all that? Destroyed.

What is your elite doing? They're looting the empire, putting money into villas and yachts, buying up estates in Monaco and London. It has produced a country with perhaps the greatest inequality in the world and an economy based on resources and plunder. Not even vodka is Russian anymore. And they are putting money into tanks. Take a lesson from your Siamese brother – the USA. You have a Pelevin writer who explains all this well – start with Generation P.

Recourse to force, the sign of a weak state

Well. As long as you have nothing to offer and people are all on their own, it's all based on looting, oil trading, hoarding and tanks – if that's what you sew, that's what you'll reap. The result? We have it now: catastrophe. Everyone is turning else…