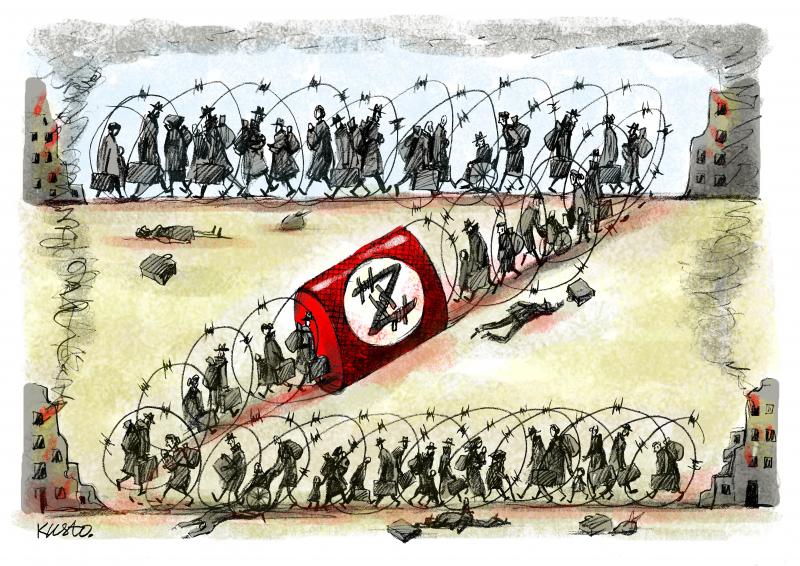 Ukrainian refugees in Poland: how long will the warm welcome last?

Nine months after the beginning of Russia’s full-scale invasion of their country, Ukrainians continue to arrive in Warsaw. Although Poles still show strong support for Ukrainian refugees, the number of volunteers helping them has fallen sharply. The question of their place in Polish society is becoming more and more pressing, says sociologist Daria Krivonos.

What often remains undiscussed in the widely distributed descriptions of support of war refugees (1) from Ukraine in the context of Russia’s invasion is that the vast majority of these volunteers – at least, in case of the major spots in Warsaw – were Ukrainians, many of whom had fled the war themselves. With the recent discussion concerning the arrival of Ukrainian refugees being centred around the rapid mobilization of solidarity in the local communities of the ‘host societies’, it is important to ask who is recognised as a part of these ‘local communities’.

While the immediate response and support of the Polish majority should indeed be applauded, here, I want to ask who is going to bear the costs of social reproduction in Ukrainian refugee migration in a long-term perspective, once the ‘host societies’ become fatigued by the war and the humanitarian feelings fade away.

We already observe how the ‘local communities’ are less willing to host the displaced, and the states (the Polish state, for instance) withdraw their aid to those welcoming refugees in their homes. As from the beginning, this solidarity has largely relied on the unstable construction of Europeanness and whiteness, one may ask a question, aptly formulated by one of my Ukrainian research interlocutors: “How long will this solidarity last? When will they start treating us (Ukrainians) like Syrian refugees?”.

With temporary protection giving no access to more expansive refugee protection and welfare rights, coupled with a fatigue of ‘host societies’, the question to be asked is who will reproduce the lives of Ukrainians fleeing the war as the war is unlikely to be over any time soon.

To answer these questions would require recognizing over a million Ukrainian citizens who had already lived in Poland when the war began, and who now bear the costs of social reproduction by hosting their family members, relatives and friends in small apartments amidst the skyrocketing rise of the cost of living. Like many others, Andrii, a fresh graduate of a Polish university working in a supermarket warehouse, told me about hosting his grandmother and his younger brother in a small one-room apartment for an indefinite period of time.

While continuing the conversations on the reception of Ukrainian refugees in Europe, it is essential to abstain from recentring a white European figure ‘standing with Ukraine’ – indeed, with all its unequally distributed resources for racialised solidarity – and keep in mind the labour of Ukrainian migrants that has been long fueling EU economies. This labour performed by ostensibly white and largely invisibilised bodies has been long needed in the EU like air.

While remaining largely overlooked by migration researchers internationally, Ukrainian citizens have been in the top of the recipients of employment related residence permits powering the EU economies, at the same time as Poland has become the prime recipient of labour migration in the EU since 2014. Over 500,000 first residence permits have been issued to Ukrainian citizens annually, almost exclusively by its nighbouring state, Poland.

“How long will this solidarity last? When will they start treating us (Ukrainians) like Syrian refugees?”

It is only with the disruption of the ‘normal’ during the COVID-19 pandemic that Europe’s reliance on this migrant labour became publicly visible as these workers could not reach their workplaces, to become forgotten once again when the emergency was ‘over’. The burden of assistance in the context of displacement too falls on Ukrainian migrant communities and people like Andrii, too often employed in a precarious low-paid economy.

When we examine the links between Ukrainian migrants’ long-term labour mobilities and current displacement in the context of Russia’s invasion, it becomes visible how those who “help” and those who “flee” are often same individuals who share and understand the predicaments of displaced communities.

The invisibility of Ukrainian migrant labour continues to be reproduced in the current reception spectacle in the EU. While often muted in the EU’s self-celebratory tone of ‘standing with Ukraine’ yet putting their labour into sustaining other Ukrainian refugees’ lives in the long-term, many Ukrainians worked in Warsaw’s major stations full days, providing information, moving the luggage, finding travel routes to other countries, helping with paperwork, train and bus tickets, translating and filling in visa applications.

Some of them were Ukrainian student workers, who had already lived in Poland before the full-scale invasion and whose housing contracts and student visas were soon about to expire. One of these students, Anna, considered moving back to Ukraine for the summer as finding and paying for accommodation in Warsaw has become even more difficult.

More : How Europe spent billions to keep migrants in Africa

It was not easy even before the war for those having ‘Ukrainian accents’, names and surnames when responding to housing adds ‘for Poles only’. Unlike other Ukrainian citizens who crossed the EU border after 24 February, people like Anna are not entitled for temporary protection and other benefits (e.g. free public transport and railway). Before the benefits were removed, a stamp in a Ukrainian passport proving the border crossing after the beginning of the war was checked at the entrance to free soup kitchens and ticket offices, dividing the line between the Ukrainians who were deserving of more support from those who were expected to be settled.

In the autumn, Anna’s landlord increased her rent by 20 percent motivating it by the inflation in Poland, which put further financial strain on her parents living in Ukraine. As I am writing these lines in November 2022, Anna continues providing free help to Ukrainian nationals with preparing visa applications for North America. She “volunteers” in one of many NGOs that rely heavily on young highly educated Ukrainian refugees who speak English, Russian, Ukrainian and Polish and worked for free.

Stories like this are nothing new and are not confined to the context of Ukraine only. Researcher show how the labour of making life in the context of disasters is performed by racilised, precariously employed localized workers confined to emotionally draining and physically demanding low-status, labour-intensive jobs. Volunteering labour performed by refugees has been invisibilised and framed as non-work.

Feminist social reproduction theorists have long argued how the invisible labour of sustaining day-to-day life has been outsourced to racialised working class communities. This understanding questions the notion of work as synonymous with pay and employment, shifting the focus towards unpaid and unrecognized forms of work. As in other cases, with volunteers’ work being reframed as non-work, the history of these forms of reproductive labour is the history of neglect and nonrecognition.

More : An EU that wages war on refugees did not deserve the Nobel Peace Prize

Volunteers’ labour has been recently theorized and problematized as ‘non-work’, as acts of love and service, training and experience opportunities. I would also suggest that these forms of non-work have differential recognition and exchange value depending on the labouring body that performs this ‘non-work’. Volunteering and solidarity gain different public recognition and value depending on sociocultural mechanisms related to race, gender, nationality, and citizenship.

Some volunteers at the station in Warsaw who came from North America indeed, talked about volunteering as ‘help’ driven by the inability to stay still at the face of a disaster; but many also had time and economic capitals that they could put into spending several weeks at the station, considering that to them the cost of living in Warsaw was more than affordable.

Some worked for Western NGOs, whose functioning became possible only thanks to the ‘help’ of Ukrainian translators, whose work was mainly unpaid yet available ‘naturally’. Some volunteers coming from abroad were students of Eastern European studies, Russian and Ukrainian languages, who were gaining important experience and linguistic practice for the future.

Meanwhile, one of the young Ukrainian women volunteering at the station said, “it is a pity I won’t even get a certificate or any other proof that I volunteered here”. She said this while preparing her CV for a round of job applications.  In addition to emotional labour and skills in information search, a longer-term sustaining of day-to-day lives through the provision of information relies extensively on linguistic skills, too often being overlooked as ‘natural’ by the virtue of one simply ‘coming from Ukraine’.

Ukrainian people’s experience of volunteering as ‘non-work’ has little exchange value and is rather seen as available naturally simply by virtue of ‘being from Ukraine’ and having natural linguistic competence. This labour is rendered invisible because it is performed by a ‘Ukrainian refugee’ herself.  While standing at the information desk and having our conversations interrupted by people asking questions about housing, visas and transportation, I spent many hours talking with young Ukrainian volunteers’ own strategies of finding paid work which would allow them to make a living in the EU.

Migrating to other countries

Many didn’t envision a long-term stay in Poland because of depressive labour market opportunities for people who just moved, while migrating to other countries was often seen as an option only by those with relatives and friends already living there.

Unlike other volunteers, many of these people – mostly young and mostly women – had nowhere to come back to, and their labour is not applauded as a response from the ‘local community’, neither it has any exchange value like in case of other non-Ukrainian volunteers. Some refugee volunteers joined precarious labour markets in the service sector working in bars and souvenir shops,which further shows the links between pracarious waged migrant labour and volunteering as “non-work” in the railway station or western NGOs.

Ukrainian people’s labour – both paid and unpaid – risks being neglected once again in Europe’s self-congratulatory narratives that only frame Ukrainians as the recipients of help, as happened in other contexts of displacement.

1) While I use a word ‘refugees’ here, it is important to remember that these people are not granted refugee status under the 1951 Geneva Convention.