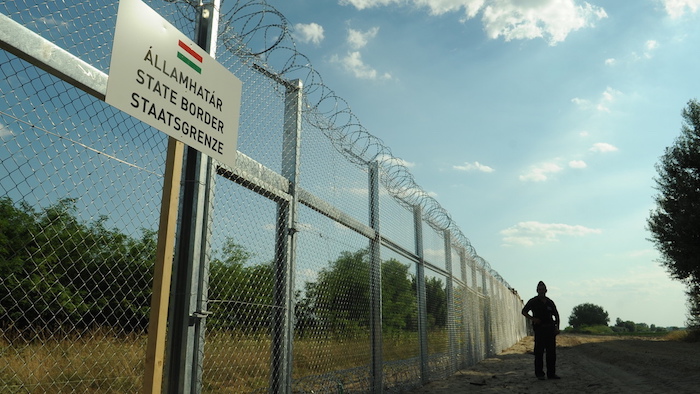 Up against Viktor Orbán’s wall

The first part of an in-depth report on the area close to Szeged, the point where Hungary, Serbia and Romania meet and where a barrier is due to be erected within the next few days to stop migrants entering the EU.

— "Where are we?" one of them asks.
— "Yes, where are we?" his friend insists.
— "They don't even know where they are!" another exclaims, surprised.
— "I come from Syria. I fled from the Islamic State."
— "Me, I come from Iraq. From Kurdistan."
— "Where are we?" a young Afghan repeats again, a while later. She fled the Taliban, worked for a year in Turkey with her mother. Now they have arrived at the gateway to Europe.

There are many here who do not know what this place is called. We – them and us – are at Szeged station, in Hungary. Some of them found out the name thanks to the GPS on their smartphones. This same device allowed them to navigate over the final border between Serbia and Hungary. Using navigation systems, they have been able to pinpoint the coordinates sent to them by people smugglers via SMS. The coordinates are a signpost to their future. But the future, which has already cost them hundreds if not thousands of euros, is still to come as they wait in this station at Europe's periphery. This is where we are spending the early hours of the morning together.

"The meaning of life is to cross borders" the Polish reporter-traveller Ryszard Kapuściński once said. It is a phrase that takes on greater resonance when three borders converge at a single point. Here, in this Triplex Confinium where Hungary, Serbia and Romania meet, the eastern tip of a barbed wire structure, three to four metres high, will soon be visible. Its construction was announced by the Hungarian authorities in spring 2015 as a means to stop what seems to be the largest migratory flow into the European Union for fifty years. Italy and southern Hungary are the two main entry points, with Greece and Bulgaria, Macedonia and Serbia as migrant corridors. This "Occidental Express" through the Balkans has already become the main access route to the EU, more frequented even than the sea routes across the Mediterranean to the beaches of Lampedusa.

This was Tito's border and also the border of Hungary's communist leader János Kádár. It was Moscow's border and is at present the border of Viktor Orbán. This was the non-aligned border of Yugoslavia's socialism "with a human face" and at present the neo-border of the European Union's brand of capitalism, also "with a human face." But the EU is currently incorporating, more or less obliquely, neo-nationalist movements that recently found favour in elections across the region.

A hare jumps out of nowhere from a field of sunflowers and scurries in front of the car. Not a police officer nor a refugee to be seen. We are in the southern point of Sopronpuszta, where on 19 August 1989 Hungarians and Austrians organised the get-together which Le Monde called the "picnic that shook history."

The wall that began tumbling in Sopronopuszta would fall in Berlin three months later. With it went the rest of the iron curtain which, running through the middle of Europe, in fact divided the world. Móni Bense, a university teacher and translator who is accompanying us on this trip, was a teenager at the time: "History is repeating itself so rapidly that the generation that lived through the area's most tragic episodes is still alive, but doesn't seem able to recall what happened," she says, as if resigned to the partial amnesia that many compatriots have demonstrated, apparently no longer remembering Hungarians' status as eternal migrants and refugees since the Treaty of Trianon.

The summer before the “Autumn of Nations”, Robert Molnár was 18 and was living in Kübekháza, a small town one kilometre from the Triplex Confinium. Today he is the mayor. In Hungary it is not easy to find such a direct opposition to the construction of the barrier, especially from within the centre-right. "I know my history," he says, "in the past, when a country decided to build a barrier or a wall, like at Auschwitz-Birkenau, in Berlin or along the rest of the eastern bloc, it always ended up working against the people who built it." For Molnár, "Hungary is already intellectually and psychologically isolated. Hungary is shutting itself off: there's no entrance or exit, no exterior or interior. We are in the middle of Europe but, if we continue to close ourselves off, the scope for Hungarians to act will diminish to the point where people lose hope and begin fleeing the country." Instead of turning into an island, "Hungary will turn into a ghetto," he argues.

At the Triplex Confinium, you might just be able to make out the sound of three church bells: from the churches of Kübekháza in Hungary, Beba Veche in Romania, and Rabe in Serbia. These three villages, equidistant from each other, form a triangle. Once a year, the villagers meet for a cross-border festival. Róbert Molnár thinks of himself as a practising Christian and likes to quote the message of Etienne the First of Hungary, Saint-Stephen for believers: "you must take care of strangers." Molnár reminds us that "the bible tells us not to do to others what we would not want done to us," before continuing: "we will suffer bad deeds in return. If we do not want to be mistreated, we cannot mistreat others."

At the entrance of the kocsma, the tavern, of Kübekháza, the owner talks about an episode involving migrants she watched on the television. In fact she has only ever seen refugees on the television. The only actual problem was that a refugee had stolen some tomatoes from a farmer, who complained on the television programme as if it was the end of the world.
Kübekháza is not yet the new Lampedusa at the end of the route through the Balkans for migrants coming from the south east of Europe, but the town's mayor and the owner of the kocsma can speculate about how it will end up. Both say that with the barrier beginning at the Triplex Confinium, one kilometre from here, “it's obvious that the refugees will simply pass into Romania and once again end up here." This deduction becomes clear to anyone consulting a map; Péter Szijártó, the young Foreign Minister, responds to it by saying, "in all parts of the border where there is no effective way of stopping illegal immigration [from Serbia into Hungary], we will use the sure-fire method of closing the border." In reality, this means extending the wall.

For as long as barbed wire does not block his horizon, Róbert Molnár believes that "it is up to the rich west of Europe to find a united response" and that "you cannot lay all the responsibility on Hungary's shoulders, because this is a humanitarian catastrophe that is affecting the entire world." He goes on to say that the decision to construct the barrier is pure “internal politics" and in the interest of Fidezs, the party of prime minister Viktor Orbán. It will cost the country 20 million euros. A poster displaying nationalist propaganda, four metres high and 175 kilometres long. This initiative, he adds, "doesn't aim to counter immigration, but it is useful to Orbán and Fidesz to pilfer a few votes from Jobbik, the party on the extreme right, since there are already thermal radars along the entire border and 98% of refugees are caught."

In a garden where Orbán covers the walls, a European garden, a child has left bunches of cherries on the tree opposite us, for the first refugees to pass through this peaceful village. Tomorrow, or the day after; they will not take long to arrive. Perhaps it will be Sharbat, perhaps Mohamed, whom we met at Szeged station. Or perhaps Rafik, who is still waiting in an abandoned factory in Subotica, without a passport, for a smuggler to give him the coordinates to continue his route.

In the meantime, in the tavern, we can still hear the echo of that Hungarian farmer complaining on the television about the tomatoes "they" have stolen. "They" refers to people who have fled the end of the world hoping to find a haven in the European Union's fortressed paradise. In Hungarian, Serbian and Croatian, "tomato" and "paradise" share the same root: paradiscom/paradiscom, paradajz/raj, rajčica/raj.