Ideas Open letter to the EU and European leaders 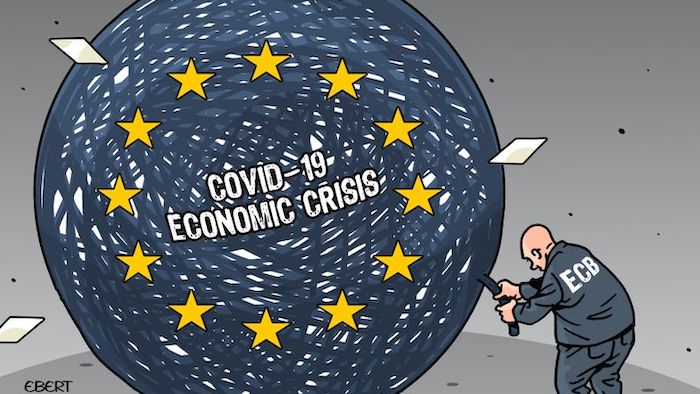 Ideas Open letter to the EU and European leaders

‘We need Renaissance bonds to face the health and economic crisis’

In this open letter to EU heads and national leaders, over 1,500 economists, academics, and professionals from all over Europe propose a series of urgent measures in response to the Covid-19 epidemic. They also demand that the EU create a common fund that would issue European securities called "European Renaissance Bonds" to help EU countries overcome the crisis.

The spreading of Covid-19 has determined the most serious global health and economic disruption hitting the whole world since World War II. The health systems, families, individuals and firms across the whole of Europe need an urgent and significant help. The necessary measures include:

– Providing resources to the health systems to cure the infected patients and to prevent new infections.

– Providing temporary unemployment benefits to all workers who will be losing their job.

– Helping families and young, elderly and disabled individuals to satisfy the additional needs resulting from the crisis.

– Providing subsidies and financial assistance to firms that have to cease or reduce their production.

– Financing the operations of Non-governmental organisations in their role of social support.

– Financing a European-wide investment plan on infrastructures and environment capable of relaunching in a sustainable way the European economy.

The European Commission has provided 25 billion euros and has suspended the fiscal rules that the European Union countries are subject to. The European Central Bank has eventually provided a 750 billion euros temporary umbrella. It could not be otherwise but, although we appreciate these efforts, we believe that they are not sufficient. An extraordinary fiscal backstop of yet unquantifiable amount will be necessary, but countries cannot be left alone standing on their own fiscal feet.

If that were the case, national debt burdens would explode, no matter how comfortable today’s fiscal space may appear. Hence fiscal measures would lack credibility, thereby determining counterproductive market reactions that would increase risk premia, disrupt European financial markets, and – in the Eurozone – put an excessive burden on the European Central Bank: a remake of the 2010-2012 sovereign debt crises on an immeasurable scale. Even more importantly, any constraint on single countries’ ability to fight the pandemic and its economic consequence is a threat to people in all other countries. If this serious emergency is not correctly addressed, the health and lives of millions of citizens will be under existential threat.

Therefore, we join to encourage the European Union to do “whatever it takes” to fight the pandemic, relieve citizens’ pains and support the economy across all countries taking an active role in financing, coordinating and implementing the necessary measures. As a result,

We propose that the resources that are necessary to respond to the emergencies that are hitting all European Union countries be collected in a common, centralized fund under the responsibility of the Union’s institutions (e.g. the Commission), avoiding an unsustainable increase in national debts. Any member country should have access to this fund based on documented needs and consistent plans agreed upon with the aforementioned institution; in case of difficulties in reaching a decision, the resources should be distributed to member states on population proportion.

As to the means needed to create the fund, several proposals are being put forward. In line with other appeals that we also subscribe to, we propose issuing Eurobonds, that we suggest calling “European Renaissance Bonds”. These bonds could be backed by some common fiscal capacity or other financial instruments created ad-hoc, considering that the fear of moral hazard cannot play any role under the present circumstances. Moreover, let us stress that this new common debt will not imply any mutualisation of existing sovereign debts but will refer only to the expenses that are needed to face the huge common shock hitting all EU countries. If a collective political determination and consensus emerges, no technical problem is unsurmountable.

The EU should transform these difficult days into an opportunity. It is time to prove the true meaning of the long integration process that has created the European Union and the Eurozone institutions. Now a common action is needed urgently to prevent an irreversible damage.

ITALIAN ECONOMISTS APPEAL TO THE ECB

In an open letter published on the MicroMega review, a group of Italian economists asks that, in the short term:

– the European Central Bank (ECB) strongly reiterates that the announced € 750 billion of assistance represents only an initial response to the crisis, and that it is willing to intervene later as needed;

– the ECB declares that sovereign bonds held under the various purchase programmes will be renewed indefinitely;

– the ECB finds a legal formula compatible with the Treaties for the definitive purchase of bonds without maturity issued by member states, with a yield of zero or close to zero, to be placed with the national central banks.

For the future, they deem "necessary" that:

– the EU governments abandon the idea that the growth of the economy can be entrusted solely to exports while continuing indefinitely with policies of containing public budgets and domestic consumption;

– EU governments note that the inclusion of the Fiscal Compact in the European treaties was rejected by the European Parliament and therefore those requirements must be dropped;

– EU governments agree that a balanced budget should only apply to current expenditure;

– EU governments officially acknowledge that fiscal policy can be used in a counter-cyclical way, even if this leads to a public deficit or an increase in it;

– EU governments abandon surveillance criteria based on unreliable parameters such as potential GDP and the output gap.

The signatories underline that "what matters now is that the European summits realise the resounding mistakes that have been repeated over time and declare that they want to follow a different path from now on. If this is not done, the cost of the crisis will be high for all European citizens and the very survival of the Union will be put at great risk."