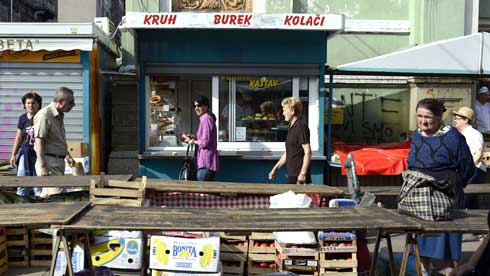 “We will become a little China within Europe”

How do Croatians view their country’s accession to the European Union? In a bid to evaluate perceptions of the impact of EU membership, Novi List spoke to the residents of Rijeka, Croatia’s third largest city.

Eloisa d'Orsi/Presseurop |  The market in Rijeka, June 2013. Photo from the series “Accession, the great illusion”, composed by Eloisa d’Orsi for Presseurop.

What will be the consequences of joining the EU for ordinary people? No one really knows. Now that accession is almost upon us, what are the real changes it implies? How is EU membership going to affect wages, prices, the quest for employment, the way we travel… ? Most of us have no clear idea about any of this.

When we look at what happened in other countries, it seems that each of them has their own individual story. So it is hard to draw conclusions about what Europe will mean for Croatian citizens. The experience will neither be black or white. But it is certain that it will not be easy.

Our leaders have pledged that, starting on July 1, the streets will be paved with gold. What of the citizens of Rijeka? We set out to discover how they view Croatia’s accession to the EU and how they believe it will affect their lives.

Pensioner and former water polo star Zdravko-Ćiro Kovačić expects that “the situation in the first two years will be more difficult than it is now. But there was no way to avoid accession. It would be absurd for a small country like Croatia not to become a member of the EU. In other words, the task that lies before us is a difficult one. We are far from being model European citizens, especially with regard to our working habits,” he says. “Croatians will therefore have to adapt to the European market, which is quaking under the pressure of record unemployment, and in particular youth unemployment.”

There is no point in whining about this, at least not according to saleswoman Mirjana Šafar: “Personally, I expect things to improve. I am an optimist by nature, and that is how I look on this change. Hopefully, it will make things easier for young people, and offer them more opportunities to work and study etc. And of course, cross-border travel will be easier – there will be no more customs checkpoints on the road to Trieste. With regard to regional products, some people are worried they won’t be able to sell them anymore. But I think we should not fret about this. Other countries are still able to sell their cheese and cream.”

However, Hasna Jukić, who has a business on Rijeka’s main square, argues that we should be wary about accession. She believes that prices are perceptibly rising, even in advance of Croatia’s entry into the EU: “Honestly, I think we will be worse off. And anyone who says the opposite is telling fairy tales. At home, I have two students who will soon be leaving university. They will have to look for work, and I am afraid there won’t be any. It is so hard to find a job today,” she says. Her remarks on the disappearance of borders were particularly telling: “If I had money I would already be shopping in Trieste. But given that I never have any money, it’s all the same to me.”

Hospitality industry professionals are hoping the disappearance of borders and the simple fact that Croatia will be a member of the EU will attract more tourists. It is a view confirmed by restaurant and hotel owner Nenad Kukurin, who told us: “First and foremost, there will be no more borders, and secondly it will be easier to buy goods, which, until now, have been impossible to find on local markets. So it will be a positive change for hoteliers. At the same time, the prices of certain products will go down. For example, the price of champagne, wine, parmesan cheese, and olive oil – these are things that we use a lot in our industry. Apart from that, I am not very optimistic. But with regard to my job, joining the EU will be positive.”

When it comes to his sector, fisherman Ante Bočina also believes that EU membership is a positive step: “In my view, it will improve the situation of people who work. Those who don’t [work] should be a bit more wary. So if you have a job, there’s nothing to be afraid of, competition is always welcome.” For Bocina, the opening of borders amounts to a business opportunity for fishermen, who will be able to sell their wares more easily, in Italy for example.

Other self-employed workers remain sceptical. According to shoemaker Dinče Jovanovski, there is a sense of panic in the air. Everyone is afraid, and there is no expectation of positive change. “The arrival of the EU is like a tidal wave. Unfortunately, no one is looking forward to it. Everyone is dreading another dramatic fall in purchasing power. We do not see any benefit in being in Europe.

"Personally, I don’t expect that anything good can come of it. The European Union has more to gain than we do. For years, we have been thought of as overpaid. Europe is not holding open the door to improve our standard of living. Instead, we will become a little China within Europe, where we won’t do anything but work. People who are hoping to find internships and jobs are already asking too much.”

Opinions are therefore divided. As to who is right and who is wrong, we will find out soon enough.