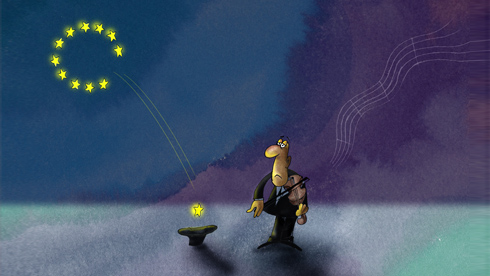 What happened to the European dream?

Amnesia, recession, the failure of political elites, divided societies… The free and caring Europe that was the dream of oppressed peoples no longer exists, it is just that European leaders lack the courage to admit it, says a Bulgarian political analyst.

The European Union no longer exists, at least not as we know it. And the question is not what will be the form of the new Union, but rather why this Europe, which was the focus of so many of our dreams no longer exists. The answer is simple: today, all of the pillars that served to build and justify the existence of the European Union have collapsed.

Chief among these was the memory of the Second World War. A survey of German secondary school students in the 14-16 age bracket, which was published a little over a year ago, showed that a third of these young people did not know who Hitler was, and 40 per cent were convinced that human rights had been respected to an equal degree by every German government since 1933. This in no way implies that there is a nostalgia for fascism in Germany. No, it simply means that we now have to contend with a generation that has nothing to do with this history. Today the conviction that the EU continues to derive legitimacy from its roots in the war is in an illusion.

The second element that facilitated the geopolitical emergence of to the Union was the Cold War: once again, a phenomenon that no longer exists. Today, the EU does not have – and cannot have — an enemy that can justify its existence in the same manner as the post-1949 USSR. In short, allusions to the Cold War can in no way contribute to the resolution of the EU’s problems of legitimacy.

The third pillar that has crumbled is prosperity. The EU continues to be very rich – even if this observation does not apply to countries like Bulgaria. However, 60 per cent of Europeans believe that their children will not live as well as they do. With this in mind, the problem is not how we live today, but what kind of life can we expect in the future. The positive prospect constituted by faith in a better future, which was a powerful source of legitimacy, has also disappeared.

Another source of legitimacy was a belief in convergence, which led poor countries joining the EU to expect that they would progressively acquire advantages in tune with membership of a rich man’s club. This still had some basis in fact a few years ago, but today, if the economic forecasts for the next 10 years are to be believed, a country like Greece is likely to remain as poor in comparison to Germany as it was on the day of its accession to the Union.

Everyone says that the EU is an elitist project. It’s true. Today, the problem is not that elites have become anti-European, but that they no longer carry any weight in national debates. The fact that all of them are fundamentally in favour of a united Europe is of no consequence, because no one listens to them anymore; they have lost touch with the people. Take a close look at sociological surveys, and you will see that the legitimacy of the EU has different explanations depending on whether you are in the north or the south of the continent.

In countries like Germany and Sweden, people have confidence in the EU because they also believe in the good faith of their own governments. In Italy, Bulgaria and Greece, people do not trust their own politicians, and that is why they believe in the EU. The logic of this position is that “even if we do not know them, the politicians in Brussels could not be worse than our own.” However, the latest crisis has shown this sentiment is beginning to crumble, and this confidence has been undermined.

Last but not least, the final pillar is the welfare state. There is no denying that the existence of a strong welfare state is an integral part of the identity of the EU. As it stands, however, the issue is not whether this welfare state should be viewed as good or bad, but whether it can continue to be viable in a context that is not only marked by global competition, but also by major demographic changes in Europe. The problem is that the Europeans are melting away like snow in a hot sun. By 2060, 12 per cent of the EU’s population will be over 80 years old. Europe is aging. So perhaps the fact that the Union often behaves like a senile pensioner in the international arena is not a coincidence. And from whom should we borrow to keep this welfare state which is so vital to the elderly up and running? From future generations? Unfortunately, they are already being tapped to pay for the accumulation of public debt…

Another consequence of the crisis has been the emergence of new divisions on the continent. Within the EU, there is no longer any separation between the West and the East, but other more critical distinctions have taken its place.

EU is not the Eurozone

First and foremost, there is the distinction between Eurozone countries and other states. Very often, when they speak of the EU, the French, the Germans and the Spanish are really thinking about the Eurozone. However, this division will remain irrelevant while strategically important countries like Sweden, Poland and the UK are not included in the euro. The other major division is the one that exists between creditor and debtor countries. When Greece wanted to organise a referendum on the country’s bailout, Berlin made the following objection: “You want to hold a referendum about our money!” There is some sense to this remark … No country should be held hostage by the Eurozone. But that is precisely the problem when you have a currency without a common policy.

How should the crisis be tackled? On close examination, some EU countries are in crisis, while others are not — or are at least not as badly affected. At the same time, in some cases, the crisis has had a positive impact on certain practices. From this standpoint, the main outcome of every policy is that there are winners and losers. This is something that the politicians have been careful not to tell us. However, it is not so much a problem, because it is always the case: there are always winners and losers. The devil is in the detail: how should people be compensated and how should others be convinced that it is in their interest to adopt such a policy in the first place.

We continue to be convinced that win-win policies do in fact exist. Given the current situation in the EU, however, this amounts to wishful thinking, because the natural solidarity that exists in nation states has yet to be established on the level of the Union. Worse still, EU countries do not all share the same history or the same language. It is not unusual to speak of “we” in reference to Europe, but what does this mean exactly? If the EU is to function correctly, the absolute need to define what is meant by “we” in the context Europe will have to be addressed.

From a speech delivered at a seminar on “Europe in Crisis,” held at Sofia University in late March.