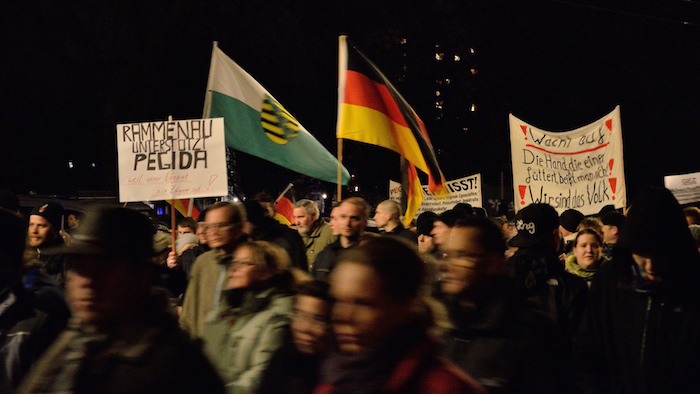 What is the meaning of Germany’s ‘anti-islamisation’ movement?

Caruso Pinguin  | The Pegida demonstration in Dresden, on 15 December 2014.

A recent anti-immigration demonstration of the Patriotic Europeans Against the Islamisation of the West (Pegida) movement in Dresden attracted more than 10,000 people. With more protests planned in other cities, the German press wonders what is behind the movement.

“Neither the politicians nor the press saw the movement coming”, writes Claus Christian Malzahn in Die Welt —

All over the country, people are discussing what the events in Dresden mean: some see a far-right rebellion, while others only see worried citizens. But they all agree on one point: Pegida is more than just a local phenomenon. Some political scientists […] even see the demonstrations as an historic caesura, a symptom of a broken relationship between politics and the people.

Writing in Die Zeit, a group of nine journalists aims to pinpoint Pegida’s organisers as people from the lower-middle-class “who have a livelihood, but no big goals” —

There seems to be a relation between the organisers of the demonstrations in Dresden and football hooligans. But this hypothesis of the intelligence services has not yet been proven.
The journalists add that even if some protesters are clearly affiliated with right-wing groups such as the NPD, Pegida is not solely a forum of the far right. There is, however, a “fluent passage” between Pegida and the anti-euro Alternative for Germany (AfD) party, even if “officially, there is not yet a uniform position towards Pegida within the AfD.”

The message that those marching in Dresden and other cities are not only from the radical right […] has reached Berlin. […] Taking it really “seriously” means considering the protests not only as temporary pre-Christmas haunting; it means pursuing immigration policies that are bound […] to the interests of the country. Even in Germany, it is legitimate to ask immigrants to show desire and interest towards integration.

Even if harder policies would fail to convince hard-line anti-immigration protesters, Kohler argues, they would marginalise them by cutting them off from their support in the political centre.

Since the Muslim population in Dresden is practically nonexistent, Malzahn asks whether the far-right protesters and groups are comparable to the French Front National, UKIP in Great Britain, Hungary’s Jobbik or Austria’s FPÖ, all of which made considerable gains in May’s European Parliament elections.

Nevertheless, in Die Welt, Jacques Schuster warns about hysterical reactions to the movement —

To consider Pegida as a right-wing group is stupid and wrong. […] Fears and problems do not disappear simply because they are voiced by the wrong side. But it is also silly to speak of foreign domination in Germany. […] When it comes to immigration and asylum, we all know that there are problems that can be addressed by anybody.