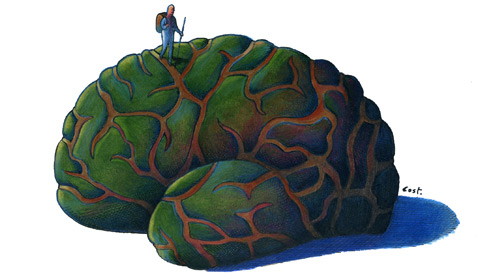 Whatever happened to freedom of thought?

More than simply a political project, Europe should be a moral project and a haven of free speech and tolerance. Intellectuals play a central role in this, but sadly they sometimes lack an open mind, remarks philosopher Alicja Gescinska.

Just as Europe is more than just a geographical entity, the EU is more than just a political body. I see it first and foremost as a moral project. If we are striving for an open society in Europe, that implies the need to support specific values, such as freedom, tolerance and individual and interpersonal responsibility. These are moral values that have to be anchored politically and institutionally. Otherwise, these values crumble.

We often take the values we enjoy for granted. Only when we risk losing them do we realise that that is not so. A few weeks ago, the internationally famed sociologist Zygmunt Bauman was threatened by 100 Polish skinheads during a lecture at Wrocław‎ University. This turbulent incident reminded me of the need for intellectual freedom and the role of intellectuals in society.

The concept of intellectualism has rather negative connotations. It evokes images of a white-haired old man in an ivory tower, who thinks he has a better view of society than the people themselves. Intellectuals are, nevertheless, indispensible for a healthy society. History has taught us that just about the first target of totalitarian regimes – the left and right wings – is the inquiring mind of lateral thinkers.

The intellectual debate can provide major counterweight to political extremism and populist rhetoric. It is therefore no coincidence that the heaviest attacks on the free intellectual space come from populist and extreme sources. That can be seen in the Hungary of Viktor Orbán, where freedom of the press and opposition are curbed, where intellectuals are driven into the shadows and where anti-Semitism, intolerance and lack of freedom are on the increase. The Wrocław‎ attack on intellectual freedom also came from a none-too democratic corner. The bunch of hooligans was eventually removed from the university by heavily-armed police and members of the Polish anti-terrorism unit. Intellectual freedom saved, you might think. But if freedom of thinking and speech is becoming the business of for our anti-terror services, then isn’t something going wrong in Europe? Free thinking in a straitjacket is difficult.

Intellectual freedom is perhaps less self-evident at home than we suspect. There are many ways of curtailing freedom; it does not necessary have to involve explicit force. Manipulation, implicit pressure, conformism and even cultivating something as vague as a zeitgeist are efficient ways of making people think in line.

Nowadays, there are various factors constricting intellectual space. The pressure on academics to publish, for example, plus the obession with sales figures in the book market, all steer the content and form of thinking in a specific direction. Ideas are merchandise and it does not pay to express an idea that does not sell.

This economic pressure is a driving force behind increasing radicalism and oversimplification. You have to be remarkable to sell. A middle-of-the-road truth will soon be trampled by an onrush of extreme opinions. Nuances are seldom striking. Bold assertions are needed.

A real philosopher is someone who questions everything and, first and foremost, himself. Self-relativism is indispensible for an open mind. Freedom of thinking only exists once you can question your own opinions. Even if that self-inquiry and self-relativism sometimes lead you to feel like a charlatan, as the Polish philosopher Leszek Kolakowski once remarked. Kolakowski was the very model of a free spirit. He was the antithesis of the philosopher who continually stands with raised fist, declaiming his truth. Kolakowski stressed his own ignorance as much as the ignorance of others. In doing so, he undoubtedly did more justice to the truth than self-proclaimed critical minds who are primarily critical of others and not of themselves.

Europe would benefit from Kolakowski’s successors

On July 10, I was in Warsaw, taking part in a debate on European values and how to interpret them politically. The debate was organised by the European Commission on the basis that interaction between intellectuals and politicians can lead to better policy. However, several members of the Polish delegation grasped the opportunity to lecture Commission President Barroso and blame him for Europe’s (alleged) cultural impoverishment. Their arrogant tone was symptomatic of the theory that I was defending, namely that intellectuals are all too often guilty of argumentative assertion and self-satisfaction. In doing so they themselves obstruct the open debate they need to function.

Meanwhile, I was sitting next to György Konrád, the Hungarian writer who, like Kolakowski, is such an embodiment of free thinking, as subtle as he is modest. I saw him roll his eyes when the debate took such an accusatory turn and he told me he was getting a headache. Europe would benefit from more spiritual descendents of Kolakowski and Konrád. Even if some feel that just saying that is arrogant and conceited of me. Time to withdraw and question myself, in other words.