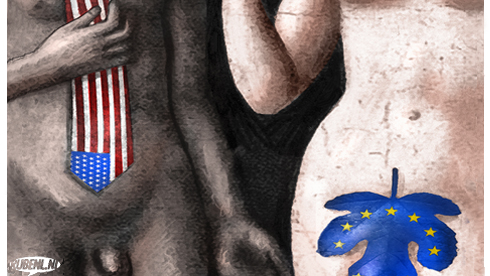 A US-European free trade zone is on the agenda. There are at least four good reasons for Europe to stay away from it, writes the liberal Die Welt.

They were abbreviated to NTA and NTMA, TAD, TED and Tafta. Initiatives designed to deepen the economic relationship between America and Europe. They remained nothing but initiatives, disappearing into oblivion. Now the next attempt has come along.

Industry lobbyists on both sides of the Atlantic can hardly stay in their seats from sheer anticipation. Business wants it, the politicians are going along with it, and in principle, free trade is a good thing. Still, this most recent plan seems likely to meet great scepticism.

1. A bad sign for the rest of the world

Tariffs actually play a role in transatlantic trade only because the volume of goods traded is so large. For their exports to the US in 2010, Europe’s chemical companies paid about €700m into the US Treasury. The tariff rate, however, averages just 2.25 per cent.

Cutting tariffs of this magnitude may be some relief to businesses, but it will do nothing for overall economic growth. That’s why a breakthrough is needed not tariffs, but on trade barriers.

The potential there, though, is limited – because powerful interest groups such as the farming lobby would fight back, and because the public would hardly go along with it.

American laws take advantage of this to block greater harmonisation in drug approvals. Europeans do not want to import hormone-treated beef and genetically modified corn from the United States, and in turn, Americans are afraid of bacteria in naturally produced cheese from France or in imported beef.

The depth of the split in opinion has already been revealed by the negotiations on a further round of multilateral trade liberalisation, nicknamed the “Doha Round”, which have been plodding along since 2001.

If anything, a transatlantic free-trade agreement will turn out to be full of holes – and that’s a problem. With a half-baked agreement between the EU and US, the two most powerful trading blocs in the world would be setting “a bad example for other free-trade areas,” warns Rolf Langhammer of the Institute for the World Economy in Kiel.

2. Third parties will be at a disadvantage

If Europe and the US were to agree a deal among themselves on liberalising trade, all the other states would automatically be discriminated against. The great danger is that, in the end, there would merely be a redirection of trade flows, not the creation of new ones. Moreover, the rest of the world could interpret a transatlantic agreement as an “exclusion, maybe even a blackmailing of third parties,” complains Langhammer.

The Economics Ministry in Berlin stresses that that is why the Europeans would ensure that the agreement remains open for other countries to join. An agreement that took an immense effort to reach, however, will hardly be unpicked again for new entrants; ultimately, the “sink or swim” principle will be laid on the table.

The Doha Round has ground to a halt, and whether it can ever be brought to a conclusion is questionable. The alliance between the EU and the US could send out a signal that the age of bilateral trade agreements has now finally dawned. With each new agreement, however, total world trade becomes not freer, but more complicated.

Jagdish Bhagwati, a professor from India now teaching at New York’s Columbia University, is one of the world’s most respected trade experts. He also perceives a danger that Europe would be sidelined as the driving force in subsequent multilateral trade liberalisation: if a transatlantic liberalisation agreement were reached, he believes, “Europeans would have to pay more attention to the interests of the US and their lobby groups.”

4. Focusing on the wrong trading partner

Transatlantic trade has surged in recent years, which is precisely why industry associations are pressuring governments on both sides of the Atlantic to speed up the agreement. But the game is shifting elsewhere – to Asia and Latin America.

World economic expert Langhammer fears that a transatlantic merger would harm Europe’s trading balance by harming its economic relationship with the emerging economies.

Jagdish Bhagwati sees the situation similarly. From a European perspective, the project as a whole is “not a good idea.” In trade matters, Europe is more flexible than the US; thanks to the EBA initiative, which allows the poorest countries to export their products duty free to Europe (with the exception of arms).

“That’s why the EU should bury the plans. Otherwise it will weaken only itself. And besides, the developing countries are better off without such an agreement.”

View from the US

Barack Obama wants to open trade talks with the European Union with the aim of creating a free-trade zone, the US president said in his annual State of the Union address, on February 12. The trans-Atlantic trade and investment partnership, as Obama has dubbed it, would give a boost to trade between the two shores of the Atlantic, which, in 2012, represented €480bn, reports US daily The New York Times. “Estimates by the European Commission indicate that a transatlantic trade partnership could be worth around €275bn per year and lead to the creation of 2m new jobs,” says the EU-watcher EUobserver.

The talks could last two years. “Some of the toughest negotiations are expected to focus on food and pharmaceutical regulations in Europe,” says the NYT. “Potentially more important than abolishing tariffs, but also much more complicated, would be a deal that harmonised regulations on products like food, cars, toys and pharmaceuticals,” the paper explains, adding, “But harmonising regulations is fiendishly difficult, in part because the 27 countries in the European Union have not completely synchronised their own rules.”