Will someone rid us of the Greek poison? 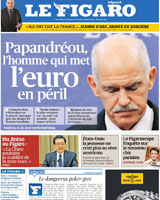 Perhaps, but it will be without George Papandreou, who, with an incomprehensible flippancy, decided to gamble the future of his country and of the eurozone on a single hand of poker: the European bailout plan for Greece must be submitted to a referendum he's decreed, without consulting anyone. The austerity imposed on the Greeks leaves little doubt as to the result of such a ballot – and presages the worst for Europe.

Whatever the next developments may be in Athens, the manoeuvres of the Greek Prime Minister, more concerned with his domestic political calculations than with his responsibilities as a European leader, will leave lasting marks. The "European Last Chance Programme" signed, at the last minute, at the cost of painful arrangements and heavy financial sacrifice, is left severely weakened – with the hope that it isn't definitively shattered.

Greece has banished itself from Europe

The consequences of the Greek turnabout are already evident. Panic has seized the financial markets and the contamination towards other weak European links is increasing. Because, at this stage, assurances from Paris and Berlin notwithstanding, nothing says that the "firewalls" meant to stop the blaze from hitting the eurozone – including forgiveness of half of Greece's private debt; additional financing for the fund to support countries in difficulty; the creation of a second fund financed by emerging nations – can be implemented.

As for Greece, it has banished itself from Europe. Forcing its way into the single currency with tampered public accounts, reputed for its fiscal laxity and its administrative inefficiency, it has already been bailed out twice by its partners. They have, in the superior interest of Europe and despite their empty coffers, braved public opinion to sign cheques made out to Athens. Now, that's enough. The latest Athenian prank completes the discredit of Greece, which is taking giant steps towards an exit from the euro – with Mr Papandreou's guilty collusion.

Translated from the French by Pat Brett