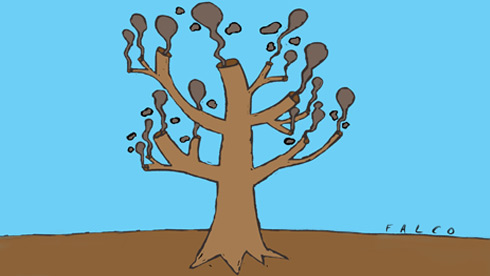 In order to produce energy without further increasing CO2 emissions, what could be easier than using existing furnaces to burn trees that could be replaced as they are used? Although this idea has much financial backing, it is only efficient over the long term.

Which source of renewable energy is most important to the European Union? Solar power, perhaps? (Europe has three-quarters of the world’s total installed capacity of solar photovoltaic energy.) Or wind? (Germany trebled its wind-power capacity in the past decade.)

The answer is neither. By far the largest so-called renewable fuel used in Europe is wood.

In its various forms, from sticks to pellets to sawdust, wood (or to use its fashionable name, biomass) accounts for about half of Europe’s renewable-energy consumption. In some countries, such as Poland and Finland, wood meets more than 80 per cent of renewable-energy demand. Even in Germany, home of the Energiewende (energy transformation) which has poured huge subsidies into wind and solar power, 38 per cent of non-fossil fuel consumption comes from the stuff.

After years in which European governments have boasted about their high-tech, low-carbon energy revolution, the main beneficiary seems to be the favoured fuel of pre-industrial societies.

The idea that wood is low in carbon sounds bizarre. But the original argument for including it in the EU’s list of renewable-energy supplies was respectable. If wood used in a power station comes from properly managed forests, then the carbon that billows out of the chimney can be offset by the carbon that is captured and stored in newly planted trees.

Wood can be carbon-neutral. Whether it actually turns out to be is a different matter. But once the decision had been taken to call it a renewable, its usage soared.