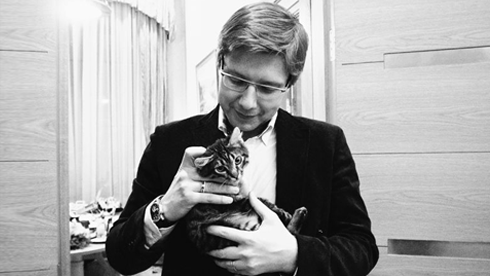 A Russian in charge in Riga

Young, hyperactive and almost a consensus-seeker: Nils Ušakovs, mayor of the capital, embodies the complex relationship between the Latvian majority and the strong Russian minority of the country.

An agent of the Kremlin. A mini-Putin. The Russian-speaking Mayor of Riga, Nils Ušakovs, has heard it all. The epithets continue to rain down, but they slide off his back: “I just do my job,” comments the popular politician with a shrug of the shoulders.

In Latvia, the Concord Centre party, considered pro-Russian, is a walking paradox. Two years ago it topped the poll in general elections but was forced to remain in opposition, as “Latvian” parties entered into an alliance against it. They had just one goal: not to let the Russians come to power. In the early summer of 2013, the Concord Centre under Nils Ušakovs then won a majority in the Riga municipal elections. This time, nothing prevented them from taking over the governing of the capital city.

“Certainly, among those who voted for us, 65 per cent are Russian-speaking”, Nils Ušakovs recognises, making no effort to disguise the image of a party that represents Russian-speakers. But the 37 year-old politician hastens to clarify that 35 per cent of his voters were Latvians, and that this reflects the ethnic composition of Riga, where 42 per cent of the residents speak Latvian and the remainder Russian.

In being elected mayor of the Latvian capital four years ago, Nils Ušakovs became the youngest mayor in the country. The impression he gives is of a very serious young entrepreneur. Evidently it’s an image that has been carefully cultivated and that has formed his reputation: as a professional, capable of speaking for hours about social projects and about his concerns for local inhabitants, and one who gets the better of his interviewers. The ring of a phone interrupts him, and he apologises as he steps away to do a radio interview. Abruptly his tone changes, and he starts to severely criticise the Latvian Unity Party.

Nils Ušakovs is everywhere: in the press, on television, on the Internet and on social networks. He comes across as a concerned politician, a sportsman, an intellectual – severe and forceful. Only pet cats soften this image; it turns out that he is also an animal-lover. No wonder, then, that his two cats, Kuzia and Muris, have a Twitter account that chronicles their slothful days.

Is there a new site waiting for a ribbon-cutting? Nils Ušakovs, who has snipped more than one ribbon, is not yet bored with that sort of thing. Is Riga buying a new snow-clearing machine? Nils Ušakovs has to be the first to sit behind its steering wheel. At an evening event at the Concord Centre, he shows up dressed in rather sporty garb, to appear closer to the common man. On March 8, he distributes thousands of roses to women working in the Riga City Council. And of course, if a new problem crops up, Nils Ušakovs takes care of it personally, without forgetting to let the media know in good time.

However, this former journalist has not only become the most popular politician in the city, but a real force for unity in Riga.

Stateless, as those Russian-speakers who did not obtain Latvian citizenship after the independence of the country [in 1991] were called, he became a naturalised Latvian at the age of 23. When talking about his past he likes to bring this up. “As my father was also stateless, and my mother still does not have Latvian citizenship, this question is a very personal one for me.”

Makes no secret of trips to Moscow

It is no secret to anyone that Nils Ušakovs travels regularly to Moscow and meets with Russia’s economic and political elites. A few years back his correspondence with Alexandre Hapilov, an employee of the Embassy of Russia who was suspected of espionage, was revealed. The Concord Centre does not deny its close links with United Russia, the party in power in Russia.

“Who else should we meet with? There are no alternatives in Russia”, Nils Ušakovs says, and goes on to list the benefits of cooperating with Russia. “My task is to advertise Riga and to create a favourable political climate. Then tourists come and cash flows in from Russian entrepreneurs, and all that is good for the city.”

Why then do some Latvians complain about this Russian-speaking politician? Evidently it’s a question of “loyalty”, a term that comes up frequently in discussions with ethnic Latvians. They do not trust Russian politicians, and that is all there is to it.

The Mayor, who himself speaks perfect Latvian, recognises that the Latvian language is mandatory for Russian-speakers. Why then did his party and other allied interests force a referendum in an effort to legalise Russian as a second official language? It was a kind of revenge, he said, for the 2009 elections, when the “Latvian” parties agreed not to let the Concord Centre, which had won a majority, come to power.

Nils Ušakovs seems prone to consider in that light the passions triggered by history and the relics of the Soviet Union. At the moment, the big topic of discussion in Riga is about the removal of a monument symbolising the Soviet soldiers who came as “liberators”, as happened in Tallinn, Estonia, in 2007. In his opinion, this monument symbolises the victory over Nazism and nothing more.

It is 7 pm, and Riga’s Town Hall is almost empty. Another professional appointment still awaits the Mayor. His detractors suspect a new meeting of the agent of the Kremlin with his masters in Moscow. It seems, though, that these suspicions are less and less necessary. Nils Ušakovs is a politician whose name has never been linked to any scandal. At least not for the moment.