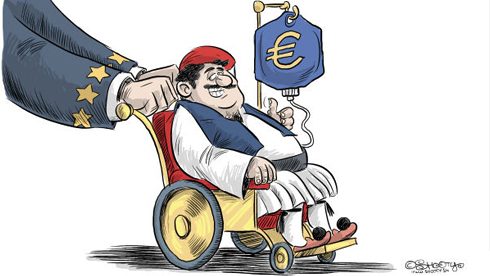 Aid is fine, but ideas would be better

Its European partners have given Greece’s government two more years to lower the deficit, but Greece will still have to wait on the 31.5 billion euro aid tranche. Once these negotiations are over, though, the groundwork for a new economic development must be built – not the easiest task awaiting the country.

Despite the endless nights, the marathon negotiations, the comings and goings of legislative amendments, the race to get the aid tranche [31.5 billion euros from international lenders] and the endless cuts, the truth is that Yannis Stournaras, Minister of Finance, has the easiest job in the Greek government. The job of every minister in a bankrupt state is a thankless one, and the decisions they are called upon to take are painful – but at least, in the framework that it is evolving in, the situation is known in advance. A bankruptcy remains a bankruptcy, as does the inability to borrow from somewhere else.

However, the challenge facing the other ministers and deputy ministers, as well as the government leadership outside of the Ministry of Finance, is much more significant.

Their duty does not stop at managing the current reality, but involves ushering in a new reality.

Greece’s provisional survival in the developed world depends on the ability of those people to lay the groundwork for new prosperity to be created – and all this in the environment that has sprung up in the wake of the collapse of Lehman Brothers and the shutting down of the financing channels, which is what dragged the Greek economy into recession in late 2008.

That job is much tougher and more complex than seeing through the spending cuts and tax hikes. The fact that the resistance against the austerity is greater than the resistance to the reforms themselves shows the truth of that.

Greece has highest rate of physicians per patient

Many will say that it is impossible to rebuild the Greek state and create the ideal setting for development when the Minister of Finance keeps slashing the funds. But experience shows that it’s not always money that’s the problem. Greece has the highest rate of physicians per patient and teachers per student in the developed world. Even before the crisis, though, the level of educational services and care provided to citizens was so low that it pushed anyone who could pay for them to the private sector. Before the crisis, social spending in Greece was at the European standard, yet its impact on reducing poverty was less that what similar spending attained in Western Europe.

In addition, the European Commissioner for Regional Policy, Johannes Hahn, said on Sunday that the country has not achieved its objectives in the use of EU funds, owing to the weakness of the public administration and poor coordination between services.

In international surveys of competitiveness, the complexity of Greece’s tax laws is more likely to be mentioned by investors than the tax scales themselves. Even today, after so many facilities have been put in place, like the “one-stop shop” and accelerated procedures, one of my friends who tried to set up a health sector company in the Cyclades had to tour the Aegean Sea three times, running from one service to the next for two months, before ultimately giving up.

This fiasco gets little publicity, both in government and in the opposition. Their silence shows that our greatest deficit at the moment, Mr. Stournaras, is not the public deficit but the lack of proposals for tomorrow.

The Eurogroup awarded “Greece a two year extension” on November 12, says Greek daily To Ethnos. Eurozone finance ministers agreed to extend Greece’s fiscal adjustment period until 2016, a two year gain from the previous 2014 deadline. This in turn will bring down the national debt to 120% of GDP in 2022 rather than in 2020.

But, proof of a difference of view between Athens’ European partners and the International Monetary Fund, the Group postponed the payment of 31.5 billion euros in bailout funds. The funds were expected following the recent passage of a new austerity plan and of a strict 2013 budget. The IMF is asking for additional measures without which, it says, Greece will not be able to bring down the deficit to the needed level thus making the bailout much more costly than anticipated.

To Ethnos hopes for a —

… general recognition by Greece’s partners and by its creditors of the sacrifices made by the Greek people […] And especially for the payment, as soon as possible, of the 31.5 billion euros.