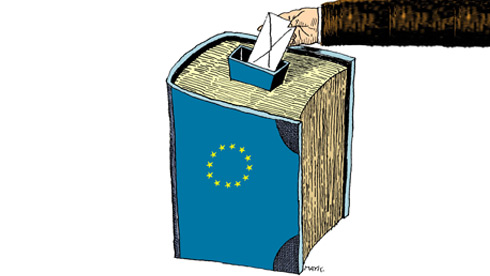 European elections are transnational, but voting is determined by campaigns on local issues, and the political consequences of the election results are essentially local. This paradox is a major obstacle for European integration.

Imagine that you are about to vote in a local elections tomorrow. You evaluate the performance of the team in power in your area and examine the alternatives proposed by the opposition. And on the basis of this analysis, you come to a decision about how you intend to cast your vote.

Now imagine that on election night, to everyone’s surprise, the authorities in charge of the vote suddenly announce: “Following a series of computer, administrative and communication errors, the elections that were held today were not local but general elections. We have therefore decided to group together all of the votes for candidates fielded by each of the political parties in the same region, and to appoint MPs to parliament as though they had won seats in a general election.”

You might think that all of this is nonsense, but it is pretty much the principle that governs European elections. [[Voters opt to punish or reward parties on the basis of their local performance; thereafter, politicians and “experts” will spend a few days deciphering the “message” that citizens wish to “send” to government]] and to the opposition. But once the future parliamentarians begin to travel to Brussels and Strasbourg, they form political groups with MEPs from other countries, and take decisions in the certain knowledge that voters will not call on them to account for their actions in five years time.

The figures speak for themselves. In a survey conducted by the Spanish Centro de Investigaciones Sociológicas (CIS) in the wake of European elections in 2009, only 13.7 per cent of respondents said “issues relating to the European Union and the European Parliament” had determined how they chose to vote, while 58.6 per cent acknowledged that they were mainly influenced by “the current political situation in Spain.”

According to the survey, only one in three Spaniards believe that, in European elections, it is more important to vote for a majority in Strasbourg than it is to reward or punish the government in Madrid. As in the absurd scenario described above: most voters are actually thinking about a completely different election when they cast their ballots [to elect the European Parliament].

In a recent paper, I examined how voting for parties that had participated in at least two European elections evolved in relation to national and European circumstances at the time. I found that economic growth in the EU had no impact on the election performance of parties whose members had been appointed to act as European Commissioners. At the same time, the state of the economy in individual member states clearly affected the results posted by parties that were in government in national parliaments. And this nationalisation of the European vote was even more pronounced in periods of economic crisis.

Should we be concerned about this? After all, [[given that the European Union is a unique political structure, perhaps we should not be surprised to find that the manner in which Europeans elect representatives to European institutions is also wholly unique]]. If we consider that European Parliament is merely a pluralist representation of citizens’ views that forms part of a complex framework to decide on mostly technical issues that are of limited interest to those same citizens, perhaps we should not worry that its members are elected in such a “novel” manner. At the end of the day, given that the vast majority of decisions in parliament are the subject of a consensus between the major political groups, does it really matter that national contexts determine whether the social democrats or the conservatives will win a few more or less votes?

However, if, on the contrary, we consider that the European Union is a body that decides on the distribution of major budgets, and that citizens want to express their opinion of these decisions and to respond to them by rewarding representatives that satisfy the wishes of the majority while punishing those who do not, then the fact that voters focus on national contexts in European elections is a problem — one that is largely analogous to electing a national parliament in the bizarre procedure described above. How can we punish European politicians whose performance is not satisfactory, and how can we support or oppose the policies of European programmes if voters elect representatives to the EU on the basis of the popularity of incumbent national governments?

It is not clear if Europeans will be able to “normalise” elections to the European Parliament in the medium to long term. Personally, I am sceptical. But if we fail to do so, then we will have to resign ourselves to the fact that greater political integration, which many believe is now indispensable, will be ushered in by the loss of our collective ability to decide on policies that directly affect us.