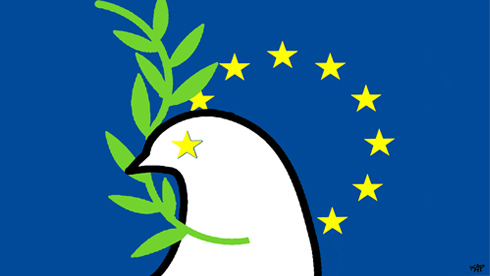 Another push for peace

On December 10, the EU is going to be awarded the Nobel Peace Prize. The question is whether this award is justified, given the ongoing euro crisis and the growing discontent. A Dutch historian argues that the award offers the perfect opportunity for Europeans to remind themselves of the European pacification process because now is the time for them to realise that European peace is not a matter of course.

In our part of the world "eternal peace" is anything but guaranteed. Only if we get through the next one hundred years without war will we be able to claim that the EU is a successful peace-keeping project. Being awarded the 2012 Nobel Peace Prize is tempting fate. However, you can also view the prize as the starting signal for all the discussions that will take place ahead of commemoration of “the big bang of the 20th Century” [the First World War]. With this in mind the Nobel Committee has beaten everyone to it.

We should seize the festivities as an opportunity for a debate on Europe, which has “no more war” as its credo. A credo that, according to some critics has become hollow and stale. Anyone who knows anything about European history will be surprised at the level of historic ignorance.

However, this does not mean that the EU is vital for European peace. It is right to doubt whether this is the case. There is a good reason why peaceful countries such as Norway and Switzerland are not members of the EU and it is true that Europe is reliant on the United States for its security and cannot guarantee that on its own.

The threat of a malicious outside power is a real one. Not only has Russia played a role in the European balance of power, certainly during Napoleon's campaign, while during the Cold War the Soviet-Union also “pacified” Eastern European, which was regarded geopolitically as the greatest threat. Russia today is no longer the Evil Empire it used to be. However, under Vladimir Putin it has been looking to reclaim that title and it is already bringing pressure to bear on nearby countries such as Belarus, Georgia and Ukraine, republics which, just like the Baltic States that are now EU members but used to belong to the Soviet Union.

It would be misguided to think that Tallinn, Riga and Vilnius are now free of Russian interference. While no-one in Western Europe pays any attention to this issue, people in Eastern Europe know better. Having said that, it might give us more peace of mind to let sleeping dogs lie. This has more or less been Europe's “strategy” towards any danger from outside.

This sounds more cynical than it is. Anyone who thinks that Europe has to be prepared for any foreign threat presumes some clear demarcation which does not exist. European outer borders, particularly in an Eastern direction, have been kept deliberately vague. The Iron Curtain that conveniently marked out our part of the world during the Cold War has gone and the EU has been carrying out stabilising expansion activities towards Eastern Europe to fill up the dangerous power vacuum.

However the alliance also has its divisions. The US and Great Britain want Turkey, their NATO partner, to join the EU as well. Germany and France have different views on the matter. Although EU expansion to the east is still a possibility, the Bosporus – these days Ankara has an “Islam-friendly” government – really is a bridge too far.

While on the western front, the British, the solitary defenders of our democratic freedoms in 1940, are becoming more and more distant from the EU. That has consequences for a common European foreign and defence policy. These would be toothless without the British who, along with the French, have a UN veto.

In Brussels, weariness with British euro scepticism means there is a tendency not to pay too much attention to the gradual British withdrawal. However, any official departure by London from the EU would, in one fell swoop, will end any illusion of Europe ever being able to stand on its own two feet, a prospect at the heart of Europe's current ingratiation with America. The US does not want to guarantee European security for ever, certainly not if Europeans also expect such support to be free.

Outside Europe, there are areas of conflict in which Europe has been embroiled since time immemorial. It is striking that the disbanding of the colonial empire, and the accompanying dirty wars, has had no negative effect on European integration, which was initiated at around the same time.

I think that this is due to the unique character of the European pursuit of peace, which since the 1950s has been entirely focused on internal reconciliation. This led to the subcontracting out to new emerging powers, of the colonial empires, which collapsed during the chaos. The US was allowed to pick up the pieces and was blamed whenever this went wrong.

The European Coal and Steel Community, which was established in 1951, was an inward-looking peace project, which gave Europe control of the heavy industries in Germany and France. It was a brilliant plan, which laid the foundation for their historical rapprochement.

That “practical pacifism”, born out of necessity and happy coincidence, brings with it the obligation to adopt a conflict-avoidance attitude to the outside world and to engage in sterile inward-looking technocratic progressivism. An approach that is also evident in the European model's pride and joy – the national welfare states.

They also pacify by constantly postponing problems or redefining them as technical issues. Politicisation unleashes too many emotions. Europe has to modernise, integrate and sterilise, or it will die. This is evident in the context of the euro crisis, which is generating contrasts thatthe euro was supposed to get rid of, and which is obliging the EU to look to the future. That makes the European pacification project vulnerable.

If the euro implodes, a regression into an “everyone for himself” attitude is likely, plus a return to the protectionism of the 1930s. It is conceivable that Spain – whose European integration has been such a success story – will slip back into a civil war due to regional frictions that have never completely disappeared.

The roots of discontent will become even deeper. The protestant part of Europe is complaining about the vices of the Catholic part. It is the reformation all over again. We should not see peace in Europe as a given, simply because young people are only interested in cheap foreign holidays and iPhones, and because war no longer pays. That was what everyone thought a hundred years ago.

It is, in fact, entirely logical that the Nobel Committee has decided that now is the right time to bestow a distinction on the EU. After all, people in Scandinavia still appreciate political correctness, even if it is unpopular.