Cartoon The EU, the UK and Covid-19 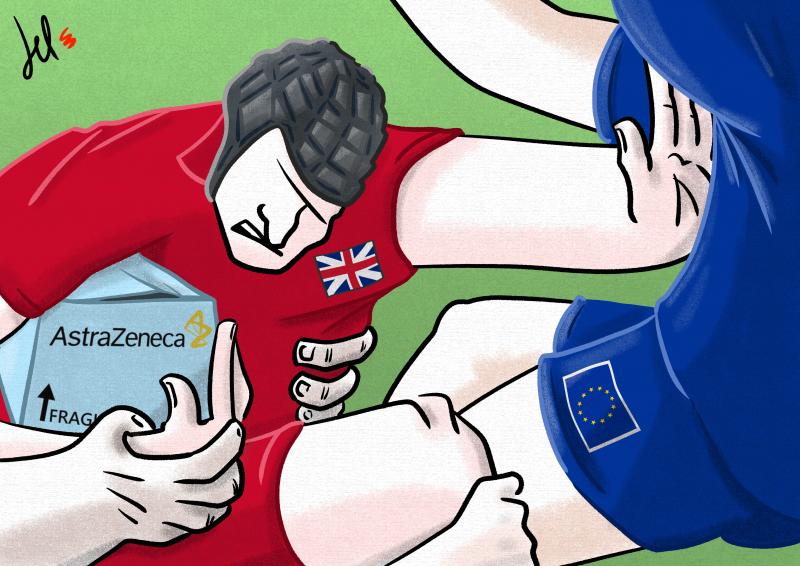 Cartoon The EU, the UK and Covid-19

AstraZeneca’s vaccine is a tough match

One month after Brexit, access to anti-Covid-19 vaccines is at the heart of intense tensions between the EU and the UK, as a shortage of vaccines is currently hampering vaccination campaigns in many European countries. Brussels accuses AstraZeneca, producer of the vaccine developed by Oxford University, of breaking its contract: the Anglo-Swedish pharmaceutical giant announced on 22 January that deliveries to the bloc will be much lower than expected for the first quarter of 2021, while honouring the UK order at the same time.

AstraZeneca states that it has undertaken to make "the best reasonable efforts", an interpretation that the Commission disputes. Suspecting that the laboratory was supplying the UK with vaccines produced on the continent, Brussels decided on 29 January to impose controls on exports of vaccines outside the EU. This would lead to the suspension of the Northern Ireland protocol, an integral part of the Brexit agreement reached a few weeks earlier. Faced with the outcry from London and Dublin, commission president Ursula von der Leyen had to back down. AstraZeneca, for its part, promised to deliver 40 million doses to the EU in the first quarter of 2021.