Bail out Ireland, but not its elites

With the Irish debt crisis top of the agenda as finance ministers gather in Brussels, Irish columnist Fintan O’Toole warns that a bailout for the economically crippled country cannot work without a shake-up of its political institutions. 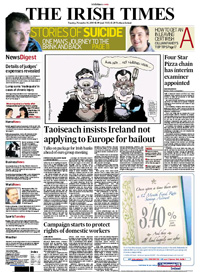 The bailing out of Ireland, whenever it happens, is not just a turning point in our history. It is also a defining moment for the European Union itself.

The way the EU handles this delinquent little State will be the great test of whether the EU is still a social and political project, built on the legacy of the second World War, or whether it is just another vehicle for the narrow interests of the rich.

Whatever the Government says (and who can believe anything from that source?), the key question in relation to the bailout is not whether it will happen, but on what terms. What is the interest rate? How long does Ireland have to pay back the money and reach the mythical target of a 3 per cent budget deficit?

These may look like technical fiscal questions. They are in fact political and moral ones. They cut to the heart of the European project. The EU exists because of a lesson learned in the most horrific way, through the rise of barbarism and the most destructive conflict in world history. That lesson is simply stated: the national interest of every European country is bound up with the wellbeing of every other European country. Or to put it even more simply, it is in no one’s interest to see a neighbour implode. Read full article in the Irish Times…